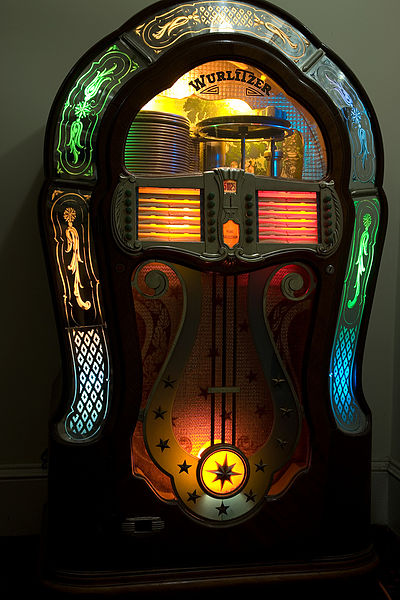 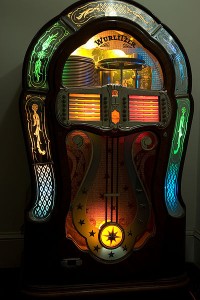 A very kind fan, psumaui, has posted on the DigNittany Forum (or will post by August 1, 2015) videos of all Penn State’s 2014 season matches.  You can Click Here for that DigNittanyVolleyball Forum 2014 Videos thread.  We’re going to be adding those videos to this site (but perhaps not all of them by August 1st).

NOTE:  Some matches will be edited and some will not.  Depends on video source.  There are both HD(1080p & 720p) and SD quality. To see best quality available, use the settings tool on bottom right of video after starting each video.

Here’s an excerpt from the GoPSUsports release following the match:

VILLANOVA, Pa. –Behind a trio of double-digit kill performances, No. 3 Penn State women’s volleyball (6-1) swept past (25-19, 25-12, 25-15) Villanova (4-5) in straight sets Friday evening at the Pavilion. With the victory, the Nittany Lions improve to 2-0 in the Villanova Classic with two more matches remaining in the event. Junior Megan Courtney led the offense with 14 kills on .591 hitting, adding eight digs. Redshirt junior Aiyana Whitney and freshman Ali Frantti rounded out the group of double-digit performers with 10 kills each. Both Courtney and Whitney posted .571 or higher hitting clips in the win. Senior Nia Grant tallied eight kills, while also registering a squad-best .615 hitting percentage and two blocks. Senior Micha Hancock directed the Nittany Lion offense to a .416 overall hitting efficiency, dishing out 47 assists. She also logged six digs to go along with a match-high six aces. Senior Dominique Gonzalez anchored the defense with a team-high 10 digs. 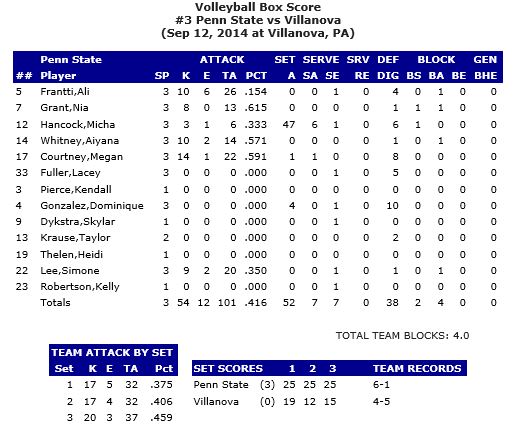 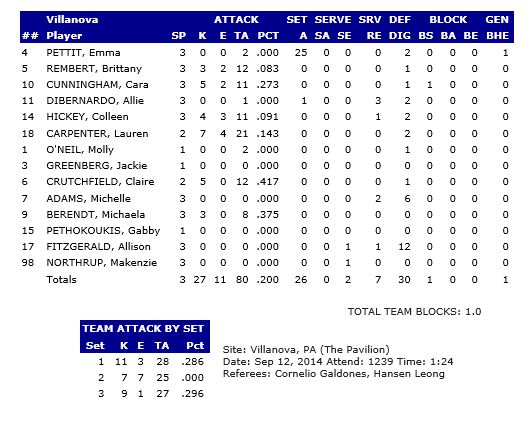