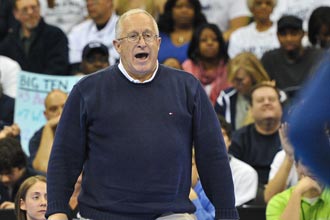 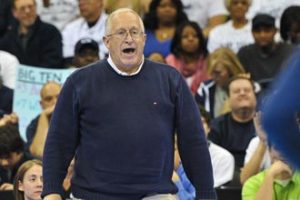 On June 17, 2016 we sat down with Coach Russ Rose, Head Coach of the Penn State Women’s Volleyball team since 1979, for a conversation about coaches and coaching, centering on three books: “When Pride Still Mattered: A Life of Vince Lombardi,” by David Maraniss, “Wooden on Leadership,” by John Wooden and Steve Jamison, and “Geno: In Pursuit of Perfection,” by Geno Auriemma with Jackie MacMullan.

We divided the interview into five parts: I. The Difference Between Excellence and Success; II.  How Do You Get to Carnegie (or Rec) Hall? III. The Cowboy’s Uncertainty Principle; IV. Getting (and Staying) On Top; and V. Fame.

It’s a long article, so we decided to repost in four segments (combining Parts IV and V into one post  — fame is fleeting, so Part V is short.)  Here’s Part III.

We hope you enjoy reading the interview as much as we enjoyed our conversation with Coach Rose.

A cowboy hitches his horse outside the local saloon, goes in, and orders a cold mug of beer. When he’s finished drinking it, he goes back outside, but his faithful horse is nowhere to be seen.  The cowboy stomps back into the bar, slams his fists on the counter, and yells, “Somebody in here took my horse. Now, I’m going to order another cold mug of beer. When I’m through drinking it, I’m going to walk back outside. I would strongly suggest whoever took my horse bring it back and hitch it to the hitching post.  Otherwise, I’m gonna do what I did down in Texas – exactly the same thing as I did down in Texas.”

The cowboy orders another mug of beer, drinks it, and walks outside. Sure enough, his horse is at the hitching post. As he prepares to ride away, the bartender comes running out and asks, “Say, fella, that was very impressive. But I’ve got to ask ya, what did you do down in Texas when they took your horse?”

DigNittany: John Wooden, whose book includes the Cowboy story, wrote that “Over the years, I changed from having lots of rules and few suggestions to lots of suggestions and fewer rules. To a large degree, I replaced specific rules and penalties with strong suggestions and unspecified consequences.”

Auriemma writes that “I bother my best players. I poke and I prod and I push and I cajole and I irritate, because I want to find out, right from the opening day, how they are going to react under stress. They are going to have to handle the most stress of anyone on the team.”

How would you describe your approach to team discipline, rules, and Wooden’s, and Lombardi’s and Auriemma’s versions of the Cowboy’s uncertainty principle?

Coach Rose:  Wooden did have some rules.  When Bill Walton wouldn’t cut his hair, he said – and I may not have the exact verbiage he used – “Bill, I’m really impressed by you standing by your principles and we are going to miss you.”  How important is long hair versus short hair?  For him it was the principle.

We don’t have a lot of rules.  I’m a big believer that I’m not going to penalize the team because a player is a knucklehead.  The penalty will come into play later, when there’s something they want to do – like work at a volleyball camp, and be with their team, and get paid for their work, and I won’t let them do it.

But it’s a different era now.  The rules Wooden had then he might not have now.

Do I think keeping players off-balance like Lombardi did can be effective for college athletes?  I teach an ethics class.  When I had football players in the class – and there were 120 players on the football team – I’d say “Does the coach know your name?  Does he really know who you are?  Does he know your parents?”  For some, the head coach knew everything.  For some, they stayed on the periphery and their position coach was the person they most interacted with on a daily basis.  Some were just happy to be on the team.

When we were in the midst of our run 109 consecutive wins from 2007 to 2010, obviously we were very good, there was never any reason to keep people off-balance.  The goal was still to get better.  The goal was to set the bar at a certain level of play, so that others had to take chances to beat us.  So how would success be determined?  For some people, success wouldn’t have been demonstrated unless we won the national championship.  And there’s a small cadre of coaches in women’s college volleyball who understand that statement because they’ve had to live that statement.

And yet, to go back to the NBA analogy, if you were to say to all the players “If you could play one game, the last game of the season, even if it’s on the opponent’s home court, would you sign up for that Game 7 on the road?”  They’d all say yes, because they’d think they’re going to score 30 points and they could win that game.

When we were in the midst of that winning streak, I never talked to the players about how many wins we had in a row, because it wasn’t relevant.  What was relevant was the notes that I had from the last match on what we needed to do to get better.  Some players I didn’t need to tell anything about what they needed to do to get better – they knew.  Other players I did.  Everybody’s different.

I might talk to some players about some things because they have the ability to shoot for the moon.  So was I tougher on some of the players that are competing this year for spots on the Olympic team?  Probably.  But did I ever say anything hard to Christa Harmotto?  Probably not, because she was the nicest teammate and young person in the gym, and she cared about the team, and she always worked hard.

I may not push the best player; I may push a player to push other players.  So my control may not be with the player who needs prodding, it may be with her teammates.  I might go to a player and say “Today it’s your job to get on her, not mine.”  I always say to parents who are hard on their kids “Hey, you can’t be like that.  It’s OK if they’re mad at me, but they always have to be able to come home to you.”

I’ll never go through a parent to get a subliminal message to a player.  But there’s not really a lot of subliminal stuff with me, because I’m direct.  When a player comes into my office, I’ll want them to tell me what they’re doing to become a better volleyball player.  Tell me what it is.  I’ll either say “Good, you’re doing the right thing,” or I’ll shake my head and say “Do you believe you’re doing those things or are you just saying those things?”

There’s a saying in coaching that you’ve got a third of the players who like you, a third who don’t like you, and it’s the third in the middle who are going to get you fired if they go to the wrong side.