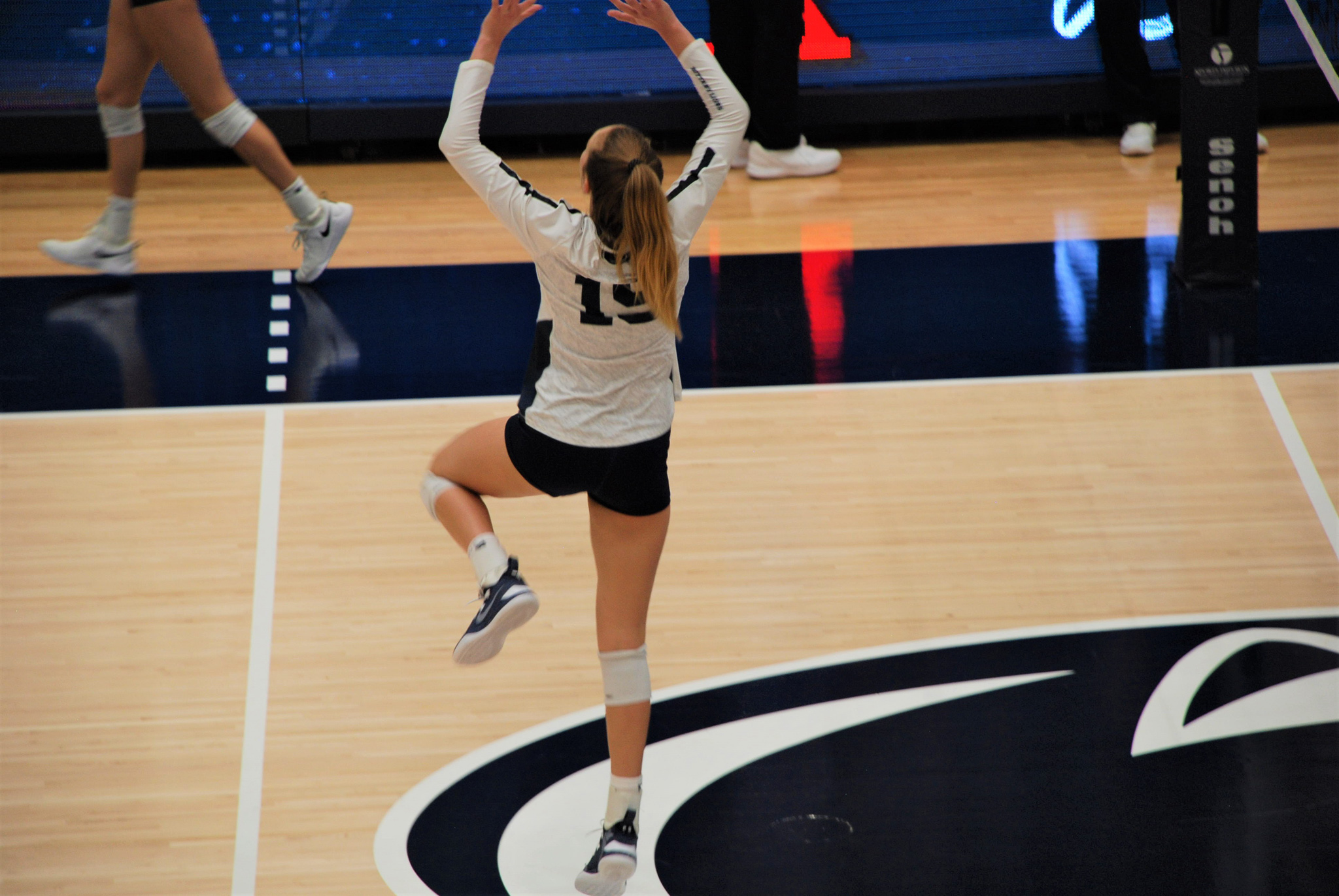 Penn State women’s volleyball has one of the best setters in the nation returning for her junior season next fall in All-American Gabby Blossom, but the Nittany Lions also have an exciting player in Emily Oerther at the position.

Oerther, a rising sophomore from Windermere, Florida, finished with seven assists and two blocks in three appearances off the bench during her debut campaign in 2019, which saw the Nittany Lions advance to their third straight Elite Eight before losing to Stanford.

As Blossom’s projected backup again this coming season, Oerther will have the chance to continue her steady development under the watchful eye of head coach Russ Rose and the rest of Penn State’s coaching staff.

Although she’s strictly played setter so far in college, trading off with Blossom during pregame warm-ups, Oerther was quite an accomplished outside hitter for her high school team in Orlando. She led the state of Florida with 538 kills as a senior at The First Academy. Oerther played setter on the club circuit for Top Select Volleyball.

“I think hitting has helped me to set and to understand where hitters are coming from,” Oerther said in October. “With blocking, I think it’s definitely just helped me to understand hitters — where their shoulders are facing, how to front them, and what shots they’re going to make.”

After Oerther dished out three assists in a sweep of Rutgers on September 28 at Rec Hall this past season, Rose was complimentary of what she brings to the table from a skill standpoint, especially in terms of her physicality, during his postgame press conference.

“I thought Emily did a nice job,” Rose said. “She puts up a good block. I wish she was a little more vocal, but she’s certainly way more physical at the net than Gabby. I think that’s something that we have to use at some point in time.”

Speaking of Blossom, the St. Louis native couldn’t have asked for a much better first season as Penn State’s starting setter. She was named a third-team AVCA All-American and a second-team All-Big Ten selection after tallying 1,332 assists as a sophomore.

Despite the duo’s proximity in eligibility and the potential tensions that could arise from that situation, Blossom and Oerther both mentioned how close they are off the court and said they enjoy competing against each other in practice.

“Emily’s awesome,” Blossom said. “She comes in and works really hard and is always eager to learn and get better. As a person, she’s so funny. I love getting to work with her. We have a good relationship and a good friendship, so it’s really fun to have someone else who’s your same position that you get along really well with.”

“Gabby is just an amazing setter in her own way,” Oerther said. “She’s strong, she understands, she reads the other side really well. She’s just a great setter, so it’s really good to not only play with but compete with such a good player. She’s a good friend on and off the court.”

If Oerther elects to remain at Penn State for the duration of Blossom’s career and doesn’t take a redshirt season, she could win the starting setter job as a senior in 2022. However, the Nittany Lions currently boast a trio of 2021 commits who have experience setting in some capacity — Rachel Muisenga, Quinn Menger, and Anjelina Starck.

One option that fans like to talk about is going to a 6-2 system.  However, with the exception of 2017, when Rose employed a 6-2 with Abby Detering and Bryanna Weiskircher, Rose has not gone with the 6-2.  [For a discussion of the 6-2 prior to the 2017 season, see “To 6-2 or Not to 6-2?  Q&A with Talking Head”]  In that case, Detering and Weiskircher were Penn State’s best two servers, so it made sense to keep them both in the rotation as much as possible.

“She has great hands,” Phegley said. “I love her to death as a person. She’s definitely very calm and consistent. We could be losing and she’ll be like, ‘It’s fine. We’re good, guys.’ She has a consistent vibe on the court, which is nice.”

Barring any additions to the team in the coming months, Oerther will be one of three Floridians on Penn State’s 2020 roster, including junior defensive specialist Jenna Hampton (Tampa) and incoming freshman outside hitter Annie Cate Fitzpatrick (Ocala).

Oerther laid out her reasons for picking Penn State during the recruiting process, saying, as many freshmen do, that Rose was a driving force behind her commitment to the Nittany Lions.

Oerther also tried her best to put into words what it’s like to play under the bright lights of Rec Hall, one of the most famous venues in the sport.

“It’s insane,” Oerther said. “I don’t even know how to describe it. It’s just awesome to have so many people there and the band and how loud and crazy the atmosphere is. It’s absolutely what you practice so hard for. I love it.”