Will Penn State or Minnesota Bring Home the Bacon?

From 1930 to 1943, the Slab of Bacon trophy (pictured at the top of this post) was awarded annually to the winner of the football game between the University of Minnesota and the University of Wisconsin.  That tradition ended during World War II, and the trophy seemingly disappeared, only to be discovered in 1994 (at which point, Wisconsin’s then-head coach Barry Alvarez reportedly said”We took home the bacon, and kept it.”

None of which is particularly relevant to tonight’s women’s volleyball match between Penn State and Minnesota, except to raise the question: “Who will bring home the bacon” with a win?

But Minnesota’s talent doesn’t stop with Dixon and Harms.  6-0 Jr. OH Ashley Wittman is also very talented, and if Dixon, Harms, and Wittman all get hot, look out Nittany Lions.  Other top players include 6-3 Sr. MB Dana Knudsen, their primary passers — 6-1 Fr. OH Daly Santana (who is also a terrific server) and 5-5 Fr. DS/L Lindsey Lawmaster — and 5-11 Fr. OH Karlee Hauer and 5-5 Fr. DS/L Kalysta White, who have seen significant playing time in the serving area.

Our Fananalysts — Lionsfan and Ugopher — thought Minnesota’s Katherine Harms and Penn State’s Ariel Scott, along with home court advantage, will be the keys to the match.  Both also picked Minnesota to win.  As Penn State fans, we hope they’re both wrong.  We’ll find out tonight.

Below is video from the Ohio State vs. Minnesota match, followed by our updated Stat Joust.

Below is an updated Stat Joust, comparing the statistics of Penn State and Minnesota.  The stat that stands out is team blocking, where Ugopher believes the differential between the two teams may be due to Minnesota learning a new blocking scheme.   And, as Ugopher points out, blocking stats don’t show the number of deflected balls, allowing a passer to make a good pass to the setter (which he believes is a factor in Minnesota’s high hitting percentage this season.) 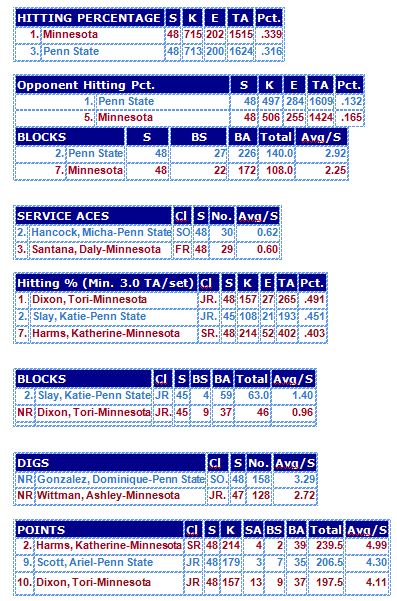 But there’s another team that can make a legitimate claim to the #1 spot — the University of Washington (ranked #5 in the AVCA poll, #7 in Rich Kern, #8 by Pablo, and #4 by DigNittany’s North Pole Poll), which defeated then-#4 UCLA on Wednesday 3-2, and followed that win with a 3-0 win over then-#3 USC on Friday.

Here’s what gohuskies.com had to say about the USC victory:

This marks the first time that the Huskies have defeated top-five teams in consecutive matches since 2006. It was the same opponents that year, with UW beating No. 5 USC and No. 4 UCLA on Oct. 26-27. It’s also the best overall start for UW since going 15-0 to start the 2009 season.

Those two wins are certainly impressive, so it will be interesting to see where the voters place the Huskies on Monday morning.  If Penn State wins tonight, our guess is that it stays at #1 in the AVCA poll.  But we’d guess the Huskies and Oregon, which defeated Utah 3-0 (25-16, 25-21, 25-22 ) will receive a significant number of votes for #1.

If the Nittany Lions lose?  We’ll let you know our view in next week’s DigNittany North Pole Poll.

Here’s a video wrapup following the USC vs. Washington match: