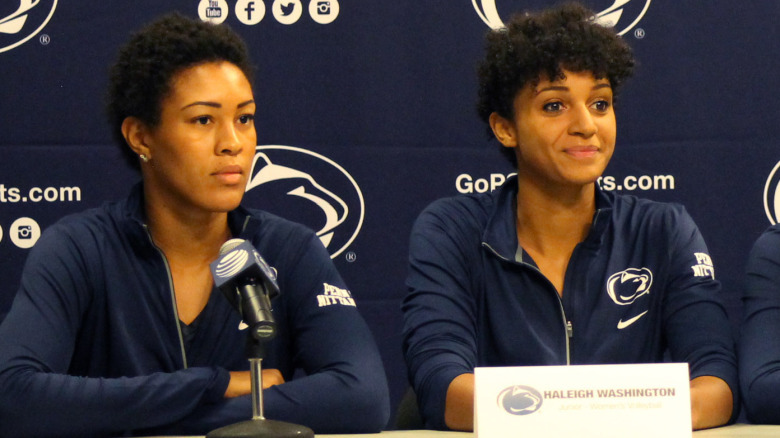 I think Tori has been working really hard in practice to make sure she is up and available in transition and making sure she is nice and open in serve receive, so she’s been offensively just super strong and doing a really good job of finding gaps in the block, and being available to hit.  Blocking-wise, Tori’s always been a really strong and good blocker, so I think she’s just had everything lined-up, and people have been hitting into her.

I think it’s interesting, compared to our freshman year when we were kind of in the same position, you have no idea what’s going on.  Freshman year, you’re just like “Hi, I’m just going to go out and hit the ball.”  You don’t know what you’re doing.  But now, as seniors, having been through this program a little bit more, there’s a level of maturity and there’s an understanding that’s outside of just being on the practice court.  You’re making sure you’re getting plenty of sleep.  You’re making sure you’re drinking tons of water.  You’re eating right.  Cause all those little things, those little one-percents — as Coach will sometimes call them — add up.  We’re focusing everything we have into getting where we need to be.

I think we’re kind of lucky because we have a very mature squad.  We have a lot of seniors on the squad already.  But for those people that are still younger, that’s just something we remind them every day at the end of the day.  At the end of practice we’ll meet at the net, and it will be “Make sure you’re drinking lots of water.  Make sure you’re getting to [the trainer] if you have an injury.  Eat food, go to sleep.  It’s just constant reminders of little things — very low key, but little reminders here and there.

You gotta go, you gotta ball out.  You’ve got six matches to reach your final destination, your final goal.  It’s one of those things where you’ve got to leave everything on the floor every time.  Just knowing that every single person on the team has your back, coaches included.  It’s not a one-person game, it’s a team sport.  It’s something we all have to do together and we all have to be aware that we have each other’s back and that we can do it if we believe in each other and we believe in ourselves, and follow the scouting report, and do everything we can to be successful.

One match at a time.

Being in the Big Ten is awesome because there’s never really a game that you can take off.  You always have to be preparing and have to be focused.  So it’s nice because we’re always locked-in.  All season you’re always locked-in and you’re always focused on taking it one match at a time, like you do for tournament time — the Big Ten season is the exact same way.  Let’s say you have the Michigans for a weekend.  You have Michigan and Michigan State.  You’re focused on the first team that you play.  You get through that night and then you focus on the second team you play.  It’s just like that for tournament time.  We have Howard coming up.  We’re focused on Howard.  And then whoever comes up after that, we’re focused on them.  But it’s just one at a time.  It’s good because we always have to be giving 100% then in practice.  It’s like that for tournament time.

Haleigh Washington on the importance of winning the Big Ten Championship

Speaking personally, it was unbelievably important.  Mostly because we, as a senior class, hadn’t won a Big Ten Championship yet, so Coach just loved to remind us daily that we did not yet have a Big Ten Championship.  So personally, as a goal, I wanted to stop that little message that he kept giving to us.  But it’s really important for the program because it’s just something that you do: Penn State works hard and they win the conference because that’s the legacy that Russ has built.  It was about fulfilling that legacy and keeping it going.

Simone Lee on the importance of knowing that if the team wins this weekend, they have another weekend at home

It’s massive.  It’s always exciting playing at home.  You [the media] can attest to that.  We can attest to that.  It’s electric in Rec Hall.  I think it’s something that not a lot of teams experience, and for us to be able to say that if we win these matches this weekend that we can continue to host — that’s huge.  Just knowing that you have so much support in the crowd, and knowing that [Penn State will have] the home court advantage.  Obviously, we’re going to have to play balls-to-the-walls, but it’s . . . . very exciting, especially for some of the younger girls.

Haleigh Washington on the importance of knowing that if the team wins this weekend, they have another weekend at home

That was a big-time goal for us at the start of the season — making sure we would have that opportunity to host the first two weekends.   When you’re away for those two weekends . . . . it’s a little bit more challenging, because that home court advantage really does play a factor.  There are some very, very competitive gyms to play in.  You go to Nebraska — it’s a very competitive gym.  Wisconsin, Minnesota — all very competitive gyms.   So to just be able to be in your own home court, sleeping in your own bed — that’s a huge thing.  It’s something that we really focused on and are really very thankful that we achieved that goal.

I think a level of maturity is definitely something that we have now.  I think everybody has played together.  We’ve trained together now for two years fully.  So I think that’s a big factor.

Haleigh Washington on whether volleyball is always fun for her

I’ll go with yes — that sounds like a safe answer.  Volleyball is, at the heart of it, the love of my life.  When you play it, it’s just freeing, you’re out there with people that you love — side-by-side, cheering you on, they have your back.  But it is [pauses] hard.  You get crippling anxiety — days when you’re in tears and your body hurts and your legs want to fall off and your shoulder’s aching.  But that’s a part of it.  It’s a love-hate relationship.  At the heart of it, you love it.  But there’s a lot that goes into it that makes it hateful.

Simone Lee on whether Haleigh Washington ever talks too much

Oh no [Haleigh Washington interjects “No — all the time.  She’s wrong.  All the time.”]

I don’t ever talk back to the opponents — I think it’s a waste of time.  We played Wisconsin this past weekend, and [a Wisconsin player] blocked [a Penn State player], and then turned around and looked [the Penn State player] down, and screamed at her.  I was so fired up, and I was like “I’m going to go out there and I’m going to do . . . . absolutely nothing.”  Because that’s what you do.  It’s not about yelling back through the net, it’s about we were up [by a lot of points] over them — that speaks for itself.  We were up 3-1 over them.  That speaks for itself.  You don’t need to say anything through the net.  You play the game.  You respect the game.  You get outta there.  It speaks for itself.

I’ve always had that kind of mentality.My dad instilled that in me.  It’s not about talking smack, it’s about playing the game.  Coach is obviously big on that.  You go in, you take care of business, you get out of the gym.  That’s a big Russ Rose thing.  So it worked well coming into this program.

I think it’s really important.  It’s something we strive for — especially coming off a championship our freshman year.  It’s something we look to and we know what it feels like. . . . We all know that every day in practice you have to go hard.  Seeing that it’s in sight, that it’s within reach, is really incredible.

You always want to leave a program better than where you found it.  Which is tough when you’re coming in freshman year and they had just won a national championship,  and then you win it freshman year.  So it’s really tough when it’s a program that’s already sky high.  Higher than that.  But if a National Championship and a Big Ten Championship is something we can do, that’s how we want to leave the program.

I wouldn’t call it pressure.  Obviously, our sophomore and junior years didn’t play out the way I would have hoped and would have wanted.  It puts a fire in our bellies and makes us want to be better.  It’s not something where we say “Oh, we have to do this because we did this before.”  We have to do the best that we can because this is our ultimate goal — a National Championship is our ultimate goal.  In the beginning of the season [it was] a Big Ten Championship first.  Now that we have that, we want to win a National Championship.  It’s always been in the back of our minds, but I don’t think it’s pressure as much as it was a driving force.

It’s an every year kind of thing.  It’s not that “last year we didn’t do as well” or “last year we did this.”  It’s not about the past, it’s about what happens now.  The program that Russ has built is about the “now” and being focused on doing the best that you can, this year.  It’s not so much about what happened last year or the last time you played “x” team.  It’s about right now, getting this one right here, right now.

We’ve worked very, very hard, and we recognized that the loss at the start of the season was less about being physical and more about being mentally there.  There is something that can be said for just not being locked-in and not being mentally prepared, and I think that’s something that factored into our first loss.  And since then, it’s been about making sure we’re mentally focused each game.  Everybody has a routine.  Everybody has something they do to get ready for the game.  I think that’s been a big focus for us, to make sure that we’re physically prepared as well as mentally.

No, I am what we like to call a stat [monster].  I like to know what my blocking numbers are, I like to know my hitting percentage.  I like to know how many errors I have.  Halfway through the game I’ll be like “I’ve had four swings, I have three kills, which means . . . . ”  It’s a terrible habit.  To any young athlete listening, just play the game.  Don’t worry about the numbers.  Don’t worry about anything like that — you’ll still be just as good of an athlete if you just play the game.  But myself personally, I don’t know why, it’s just a part of my game.  I can’t help it.  It’s a terrible habit.   [Someone says “stat monster.”  Haleigh repeats “Stat monster.”]