Jim Cramer seems Bullish on the Hoosiers.  Our money is still on Penn State

This has been a tough season for Indiana.  Last in the Big Ten, with no wins in seven tries.  Not much to say about it, really.    Here’s what the Sports Information Department had to say after last night’s 4-set loss to Ohio State:

IU got 13 kills from Kelci Marschall and 10 from Ivie Obeime. Marschall hit .290 in the match. The Hoosiers got 19 digs out of Caitlin Cox and 36 assists from Mary Chaudoin.

And we understand that.  There are only so many ways you can spin performances that end with an “L.”  And we agree that it’s highly unlikely that the Hoosiers rise up tonight to defeat Penn State.  But if the Penn State players or fans think a “W” is in the bag for tonight’s match, they should think again.  And think back.  To  this, from October 9, 2010: 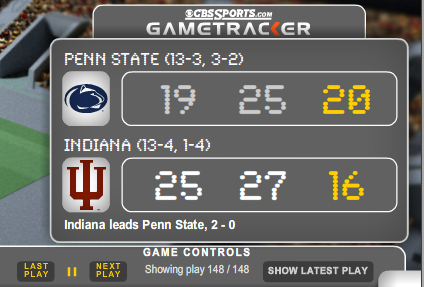 Apparently, GameTracker was so befuddled with the situation that it just broke down, getting stuck in the third set with Penn State leading 20-16.   GameTracker’s message to Nittany Lions fans seemed to be “Stop right here, this isn’t going to end well.”

Could Indiana roll over Penn State in Bloomington?

Of course, Penn State has already stepped up its performance in this season’s “Indiana Weekend” over last year’s version, when the Nittany Lions lost both matches in a Lost Weekend.  And we don’t expect a repeat of last season’s meltdown against Indiana.  For one thing, the fabulous Ashley Benson has graduated — a truly great player.  But tonight is no time for the Penn State players to decide to mail one in.  That kind of letter is likely to come back “postage due” with a big “L” stamped on the front.

Here are Penn State’s statistics updated to include the Purdue match: