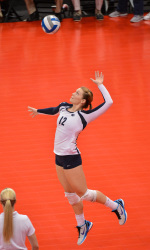 Tony Mancuso of GoPSUsports.com has posted a video interview with Micha Hancock. As always, Tony does a great job, and the video, which we’ve included below, is worth a view.

For the statistically minded, we’ve included four tables that show Micha’s career statistics.  In almost every category, she’s having her best season yet — this, despite the graduation of Deja McClendon, Ariel Scott and Katie Slay, and the need to adjust to new teammates (or teammates playing in new positions) all along the front row.  In fact, with Micha Hancock directing the attack, this year’s team is hitting a collective .356 (tops in the NCAA) compared to .305 last season.

It’s nice having Micha Hancock on your team.

And finally, here’s an interview with Micha at the 2013 AVCA All-America Awards Ceremony, followed by highlights of Micha’s career up to 2014:

2013 (Junior): NCAA Tournament Most Outstanding Player; AVCA 1st Team All-America; Volleyball Magazine 2nd Team All-America; Big Ten Setter of the Year; All-B1G Ten. Continued her record-setting performance from the service line, averaging 0.65 aces/set — good for 2nd overall in NCAA Division I and 1st in the B1G — which upped her career total to a Penn State career best of 254 service aces (breaking the previous record held by Ellen Hensler, who starred for the team from 1983 to1986). Other highlights from the season included: