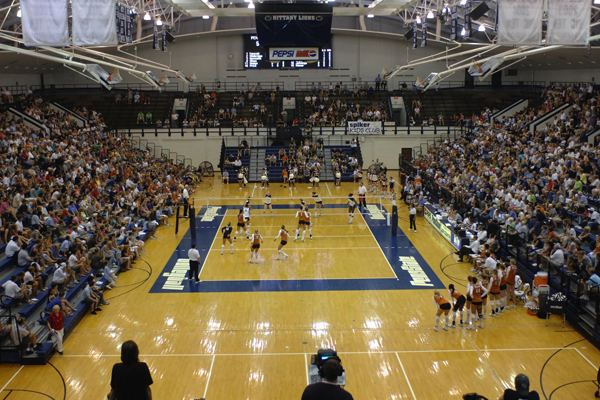 Penn State women’s volleyball team returns to Rec Hall for the first time since 2009 on Friday, Sept. 3 when it hosts the Hampton Inn Classic. The Nittany Lions face Seton Hall on Friday, before taking on Colgate and VCU on Saturday, Sept. 4.

Live stats will be available for all three of Penn State’s matches via a link at www.GoPSUsports.com.

The Nittany Lions are coming off a successful weekend at the Carolina Classic with a 3-0 record. Penn State earned straight set wins against UNC, Villanova and Campbell. Senior Blair Brown led the Lions with 4.00 kills per set, while freshman Deja McClendon averaged 3.22 kps to rank second on the team. Sophomore Kristin Carpenter paced the offense with 8.11 assists per set, while D’Errico had a team-best 1.89 aces per set. On defense, D’Errico led the squad with 5.89 digs per set and senior Arielle Wilson had 1.78 blocks per set.

For those of you who won’t be at the matches, or have yet to experience the great atmosphere at Rec Hall, below is a video of Penn State’s 2008 victory over California in the NCAA Tournament Elite Eight: