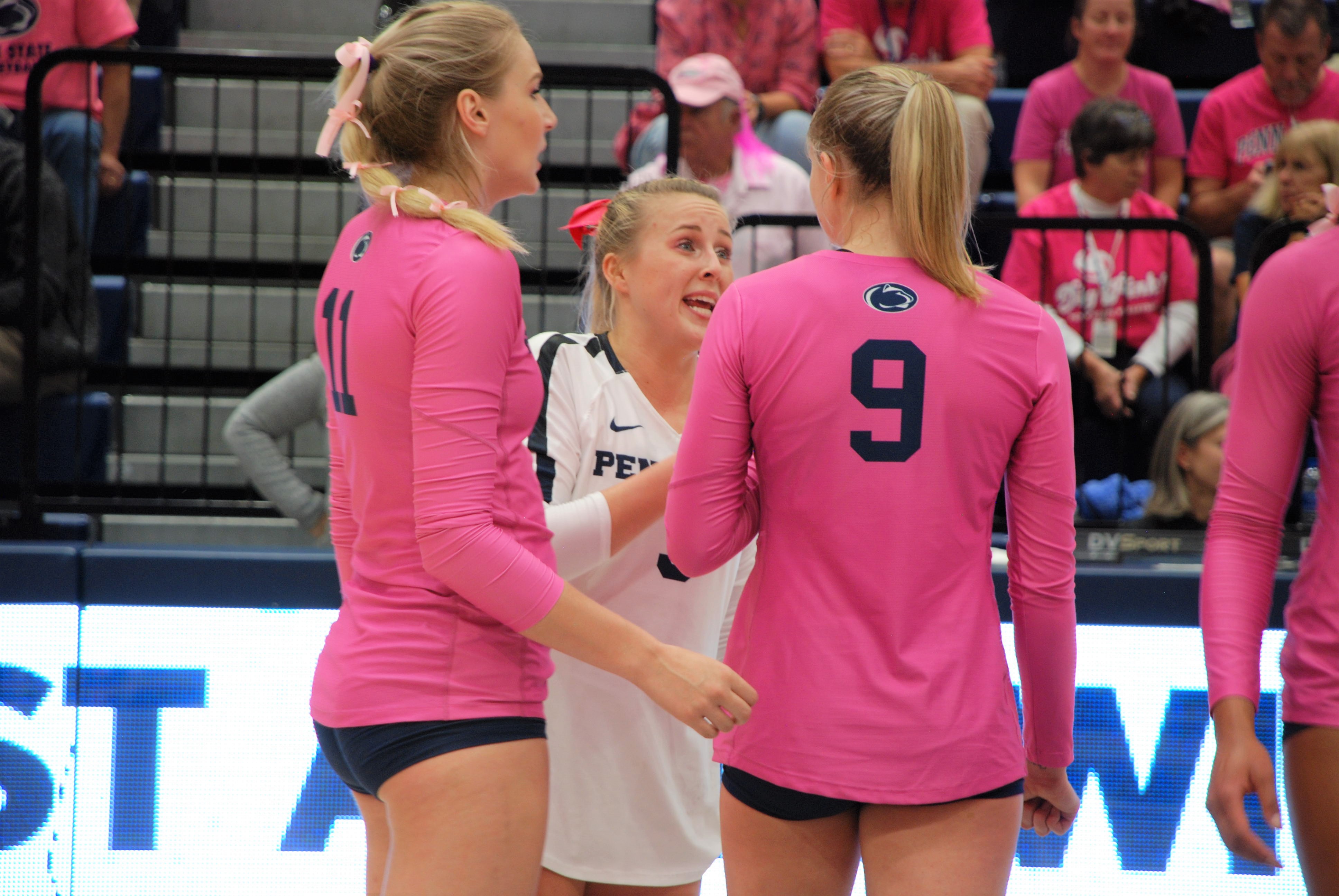 Head coach Russ Rose was off recruiting, so assistant coach Katie Schumacher-Cawley fielded questions ahead of a pair of home matches against Indiana and Purdue this weekend. Tori Gorrell and Jonni Parker also spoke before practice in the main gym.

Coach Schumacher-Cawley on the coaching staff’s confidence in Kristin Krause:

“It’s almost like a no-brainer [to sub her in to serve at the end of the Nebraska match]. Kristin’s always ready to go. She works hard in practice. I think she’s always ready if we need her. She’s always into the game and knows what’s going on. She did a great job.”

“Lauren’s been doing some good things in practice and we’re kind of easing [Allyson Cathey] back. She needed a little bit more rest. I thought Lauren did a great job and was able to block and attack. Everyone trains every day and, you know, it was her opportunity to go.”

“I think they’ve been playing really well the last couple matches. With passing, I think Kendall [White], Jenna [Hampton], and Keeton [Holcomb] have been passing exceptional and playing great defense and really holding it down for us back there.”

“It’s just such a great atmosphere to be in, whether we’re playing home or away in the Big Ten. I think every gym has a great atmosphere and great group. It’s definitely fun being on the other side of it as well and just try to help as much as I can.”

Coach Schumacher-Cawley on positive takeaways from the weekend despite the Nebraska loss:

“You always want to win, right? I think some positives — I do think our back court was playing well. I think Jonni had a good weekend. Tori’s been taking some big swings for us. I think the middles have been doing a good job blocking. I think everyone’s getting better in their position right now. We need to continue that and give it our best the last couple weeks here in the Big Ten.”

Coach Schumacher-Cawley on the team’s focuses heading into Indiana and Purdue:

“I think just controlling the ball on our side and playing well. It’s senior weekend for us, so it will be nice to honor the seniors and hopefully send them off on a positive note here.”

“My short time with them here, because this is just my second season with them, they’ve been a great group to be around. They definitely give their very best to Penn State and to Penn State volleyball. I’m excited to see what their futures hold and want them to enjoy what they have left in their college careers.” 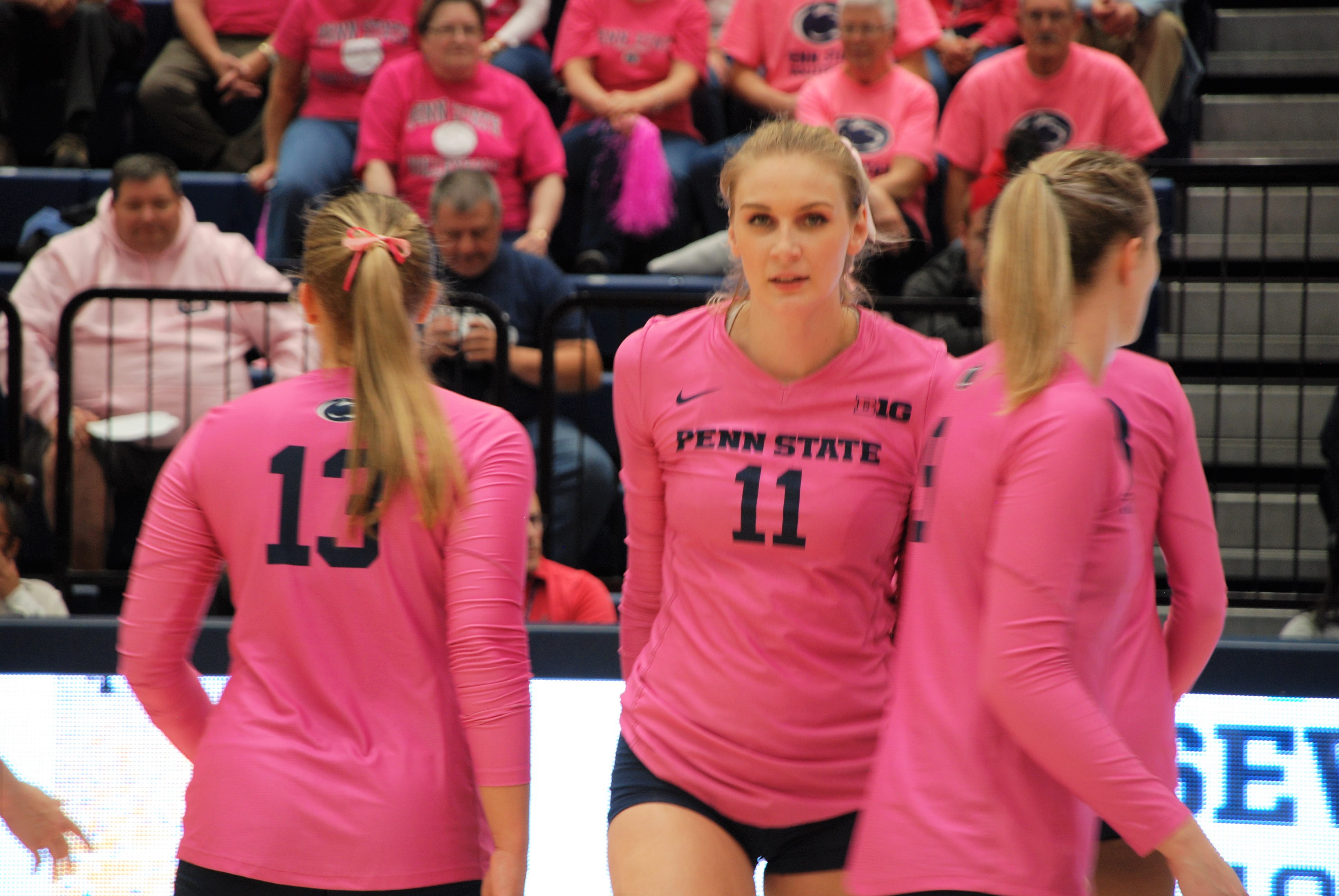 Tori Gorrell on playing with this senior class and being recognized this weekend:

“Senior weekend has always been a big deal. I’ve always been able to be a part of it with teammates. I obviously love my girls in my senior class. They’re a great group. It’s different to think about moving on. We’re all going to be going on to different parts of our lives, which is really interesting but also scary. It’s different to see how their paths are going to take them, and when we catch up in five years from now what it’s going to be like.”

Tori Gorrell on her favorite thing about playing for Penn State:

“The traditions, for sure. There are so many small things that have gotten passed down. I remember Kendall Pierce my freshman year would do something with Bryanna [Weiskircher] and then when Kendall left, Bryanna and I did it together. Now that Bryanna’s gone, Jonni and I do it together before every game. It’s just running out together — the first two who run out onto the court before warmups. Just small traditions like that. Or even before a game, the exact time that something has to happen, we’ll make sure that we do that. Or even when we hold Kaitlyn [Hord] back right before we serve. Just traditions like that. Penn State has always been really well known for its traditions and that’s probably my favorite thing.”

Tori Gorrell on her proudest accomplishments so far as a volleyball player:

“Obviously making it to the Final Four a couple years ago was really exciting. It was a really good season; unfortunate ending. Winning the Big Ten was really cool. Maybe last year beating Nebraska for, so far, the only time in my career. Or being able to represent Penn State on the Big Ten foreign tour was a really cool experience.”

Tori Gorrell on the tradition of players calling each other’s names while peppering before matches:

“It started a couple years ago and it was just a good way to make everybody have energy before a match. We try to yell as loud as we can, because we have to be able to hear each other on the court, and that’s the kind of energy and the loudness that’s going to be going on during a game. It’s preparing us for how loud we have to be in a match.”

Tori Gorrell on something she knows about Big Ten volleyball now that she didn’t when she was a freshman:

“I always knew it was going to be a really tough conference, but this is actually crazy. I didn’t really understand how conferences worked when I was in high school. In Canada, everybody in Ontario plays everybody in Ontario. That’s your conference. So I kind of thought that’s how it was here. I thought it was everybody in Pennsylvania played everybody in Pennsylvania. Obviously not. That is not the case. So I learned that when I was a freshman. Now, what have I learned about the Big Ten? Every weekend is going to be an incredibly important weekend. Every match in the Big Ten has the same value, regardless of [whether] you’re playing a team that’s in last place or the team that’s in first place. Every weekend, every game matters.”

Tori Gorrell on whether there’s anything she won’t miss about playing for Penn State:

“No. There’s definitely not. I’m going to miss everything. Even the terrible Prowler Tuesdays. [The collagen drinks] are just one of the amazing, added benefits of being a part of this program. Even if it’s terrible, I know that it’s helping me — even if it doesn’t feel like it at the time. Everything that is provided for us is awesome. I’ll miss it.” 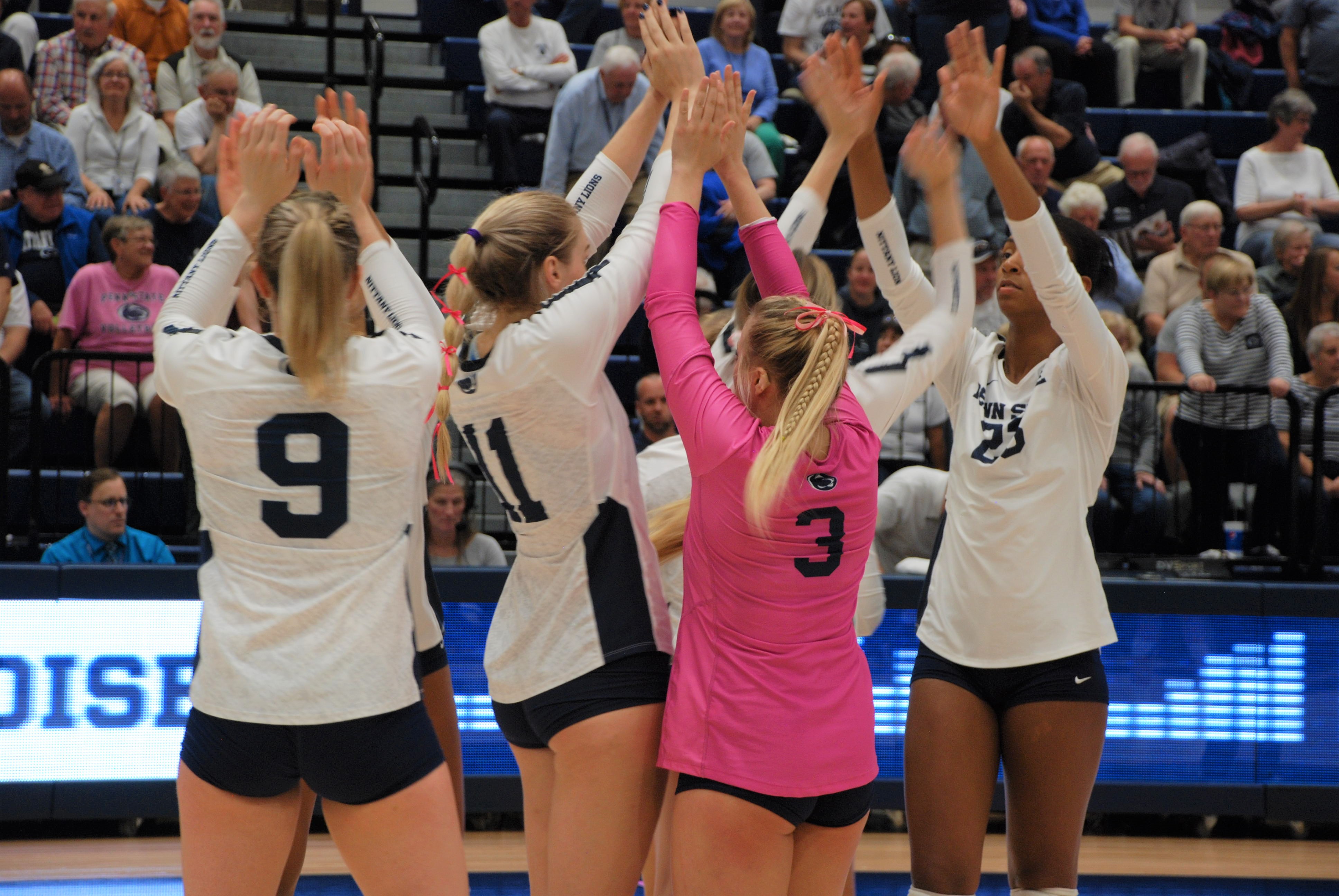 Jonni Parker on the play of Penn State’s defensive specialists:

“I feel like our [defensive specialists] did really well. Nebraska is a great team and has a great offense. It’s hard to defend those types of teams, and I think they did really well. We’re very scrappy reading the defense.”

Jonni Parker on what this senior class means to her:

“I’m definitely going to miss them. You’re going to miss any senior class that goes out, because you’re going to want to give them the best season that they want to have, especially their last season. Last season, I remember after Stanford I was talking to Nia [Reed] and I said, ‘I’m sorry. I wish we could have sent you out a better way.’ That’s just going to be our goal the rest of the time we’re here. We’re going to want to send the senior class out the best way possible. They’re a great class and I think they’ve all had very successful careers. I’m excited to see what they all do afterward.”

Jonni Parker on the positives from her club volleyball experience prior to Penn State:

“My club experience was great. I switched clubs and both clubs were amazing. I learned a lot at [Munciana] and I met Kendall [White] and I ended up being with Kendall. That was even better. It teaches you a lot — not just on the court, but off the court as well. It teaches that grit and that tough mentality.”

Jonni Parker on the team’s focuses heading into this weekend: