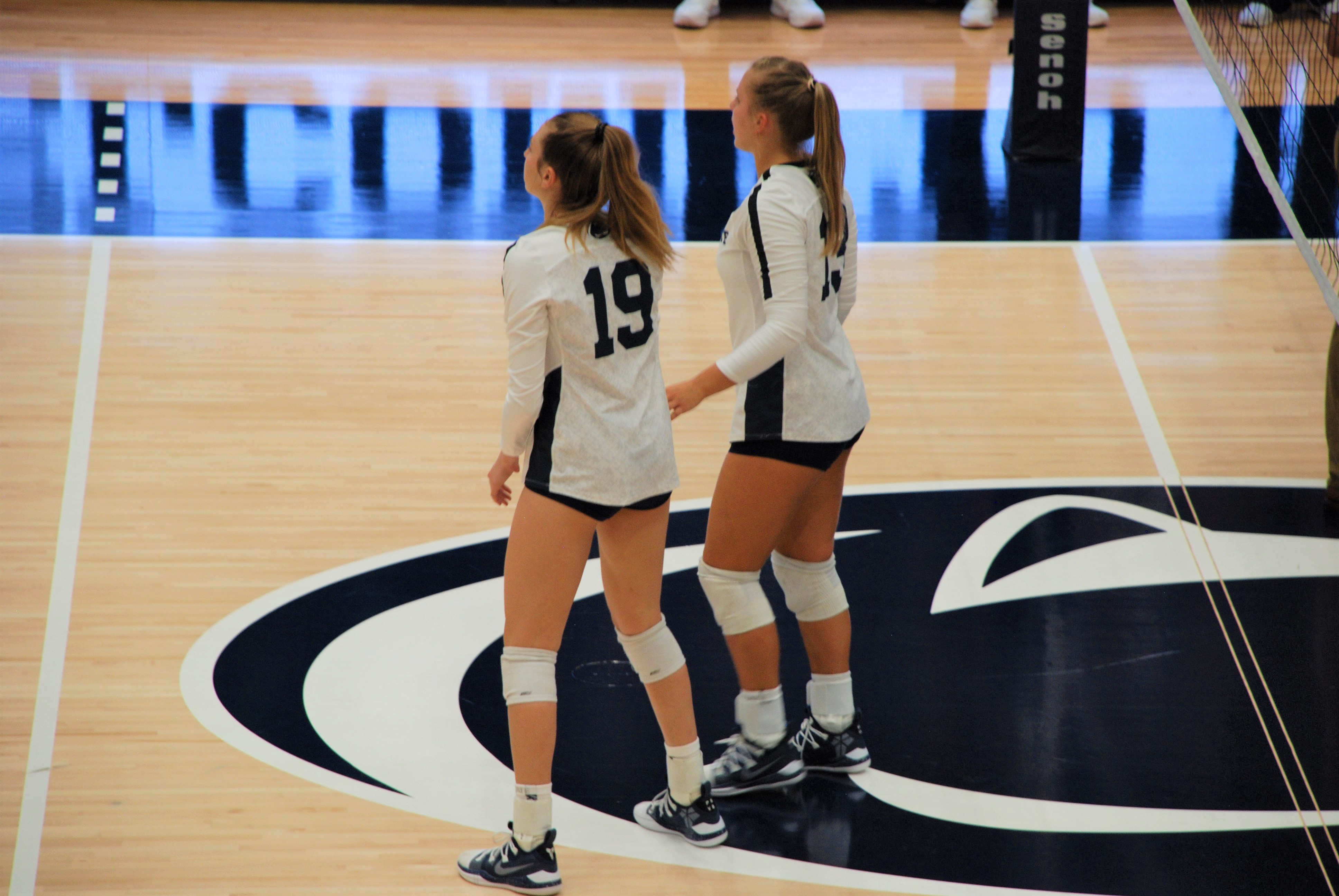 Head coach Russ Rose, sophomore setter Gabby Blossom, and freshman setter Emily Oerther fielded questions this week. Oerther made her second appearance of the season in a sweep of Rutgers Saturday at Rec Hall, tallying three assists off the bench in the second set.

“We’ve had a number of players over the last 10 or 15 years be involved with the national team, so it’s always great when the players have the opportunity to continue their playing careers, whether it’s domestic or professionally. Certainly representing your country offers the players a real special opportunity. These guys were both on the roster that helped the U.S. team qualify for next summer’s Olympic Games, as did three members of the men’s team. Next summer, there will be a selection of players who will actually be selected for the Olympic team, so a number of things happen between now and then. Hopefully those players will still be relevant and in the mix and have a chance to go to Japan and represent the United States.”

Coach Rose on the Wisconsin match:

“Playing on the road is always different than playing at home. I picked Wisconsin to win the Big Ten, so I have a great deal of respect for the roster that Wisconsin has. They’re capable of getting 7 or 8,000 people into their facility, so the support that they have from the community is a very high level. They have a player who played for Team USA over the summer in Dana Rettke. They’re a very strong team. They’re not just representative of one of the top teams in the conference, they’re representative of one of the top teams in the country. Playing against the top teams always gives you an indication of where you are, but all 20 matches in the conference have the same value. If you spend all your time and energy on one match, many times you get distracted and you’re unable to rebound and get ready to play the next match. This is a mid-week match, so it doesn’t give us a lot of time to prepare. These television matches are always a challenge playing at 9 o’clock our time. It makes it tough for the players. It messes up their week. We’re fortunate that we charter, but it certainly doesn’t change the fact that we’ll be back at midnight or 1 a.m. The kids have to go to class at 8 o’clock. It’s a challenge.”

Coach Rose continued on the Badgers:

“Both teams won their first weekend’s matches at home. Wisconsin came off the week before having lost two matches against a very strong Washington team — a team that beat Stanford a couple nights ago at Stanford. Washington’s a really good team, so I think Wisconsin had the benefit of playing a really good team and having an opportunity to see some areas that they needed work on. Washington had the ability to control the ball. Obviously [Wisconsin] shored those things up with their wins against Purdue and Indiana last weekend.”

Coach Rose on reserve players who are impressing him in practice:

“I think Macall [Peed] has been working hard. I think her and Emily [Sciorra] have been making good contributions. Amanda Phegley has been getting healthier. She was dinged up for a good part of the preseason. She gives us one of our better arms. Those people are giving us a few more options as we progress into the early part of the conference schedule.”

“Rettke is one of the leading hitters in the nation. When she has the ball, it’s like two different rotations. When she’s in the front row, they’re at a heavy advantage. When she’s on the sidelines, other teams have to try and score some points when she’s out, because that’s your best opportunity to score points. She’s a dominant player.”

Gabby Blossom on what goes through her head pre-serve:

Gabby Blossom on traveling to Wisconsin:

“Wednesday traveling is always a little weird, just the way it breaks up the school week, but we do charter so it’s super nice. We only miss one day of class and we have really awesome professors and academic counselors who help us. School-wise, it’s not terrible. It’s nice being home on Saturday because then we’re not missing [class] Friday. It’s exciting. Traveling is always fun with your teammates. Tomorrow night is a really big game and then when we come back Saturday and play Iowa, that’s another big game. The Big Ten is competitive and the travel schedule can be kind of what you make it.”

Gabby Blossom on Emily Oerther as a setter and a person:

“Emily’s awesome. She comes in and works really hard and is always eager to learn and get better. As a person, she’s so funny. I love getting to work with her. We have a good relationship and a good friendship, so it’s really fun to have someone else who’s your same position that you get along really well with.”

Gabby Blossom on what it’s like having girls come up to her after matches:

“It’s honestly so weird. Even last year, they were like, ‘Can we have your autograph?’ I was like, ‘You want my autograph?’ It’s really cute and it’s fun, because you remember when you were that age and you were watching college volleyball on TV. It’s definitely a cool experience and it kind of makes you step back and be like, ‘I play this sport because I fell in love with it when I was their age.’ We have camps [over the summer] and some of my campers were up here a couple weekends ago and it was so fun. Our fans have always been incredible to us.”

Gabby Blossom on what she knows about college volleyball now that she didn’t last year:

“You get more comfortable in what you do. Obviously I’m setting this year, which I didn’t do last year, so that comes with a lot of different experiences and roles and things that happen. I’m definitely still learning. Every week and every day of practice is a learning experience, but I think you learn how to manage the traveling and school and all the outside things — just the management of how everything works. When you’re a freshman, you’re like, ‘Oh, whatever.’ Now you’re like, ‘I can get this done on the road or I need to do this homework before I leave.’ It’s still a learning curve of what you can do. The older you get, the more experience you get with the program and the coaches and how everything works.”

Emily Oerther on how playing outside hitter in high school prepared her to be a more physical blocker:

“I think hitting has helped me to set and to understand where hitters are coming from. With blocking, I think it’s definitely just helped me to understand hitters — where their shoulders are facing, how to front them, and what shots they’re going to make.”

Emily Oerther on the adjustment to college:

“It’s a really big adjustment. I think it’s very different, but it’s really awesome. It keeps you busy and it just always has me in the gym a lot. I really enjoy it, there’s just a lot less time [than high school].”

Emily Oerther on why she chose Penn State:

Emily Oerther on her relationship with Gabby Blossom:

“Oh my gosh. Gabby is just an amazing setter in her own way. She’s strong, she understands, she reads the other side really well. She’s just a great setter, so it’s really good to not only play with but compete with such a good player. She’s a good friend on and off the court.”

“It’s insane. I don’t even know how to describe it. It’s just awesome to have so many people there and the band and how loud and crazy the atmosphere is. It’s absolutely what you practice so hard for. I love it.”

Emily Oerther on having fellow Floridians Jenna Hampton and Amanda Phegley on the team:

“I love it. Especially when winter comes, I am scared. I’m going to need some help preparing. I don’t own a winter coat. Yeah, it’s pretty awesome to have them [on the team].”