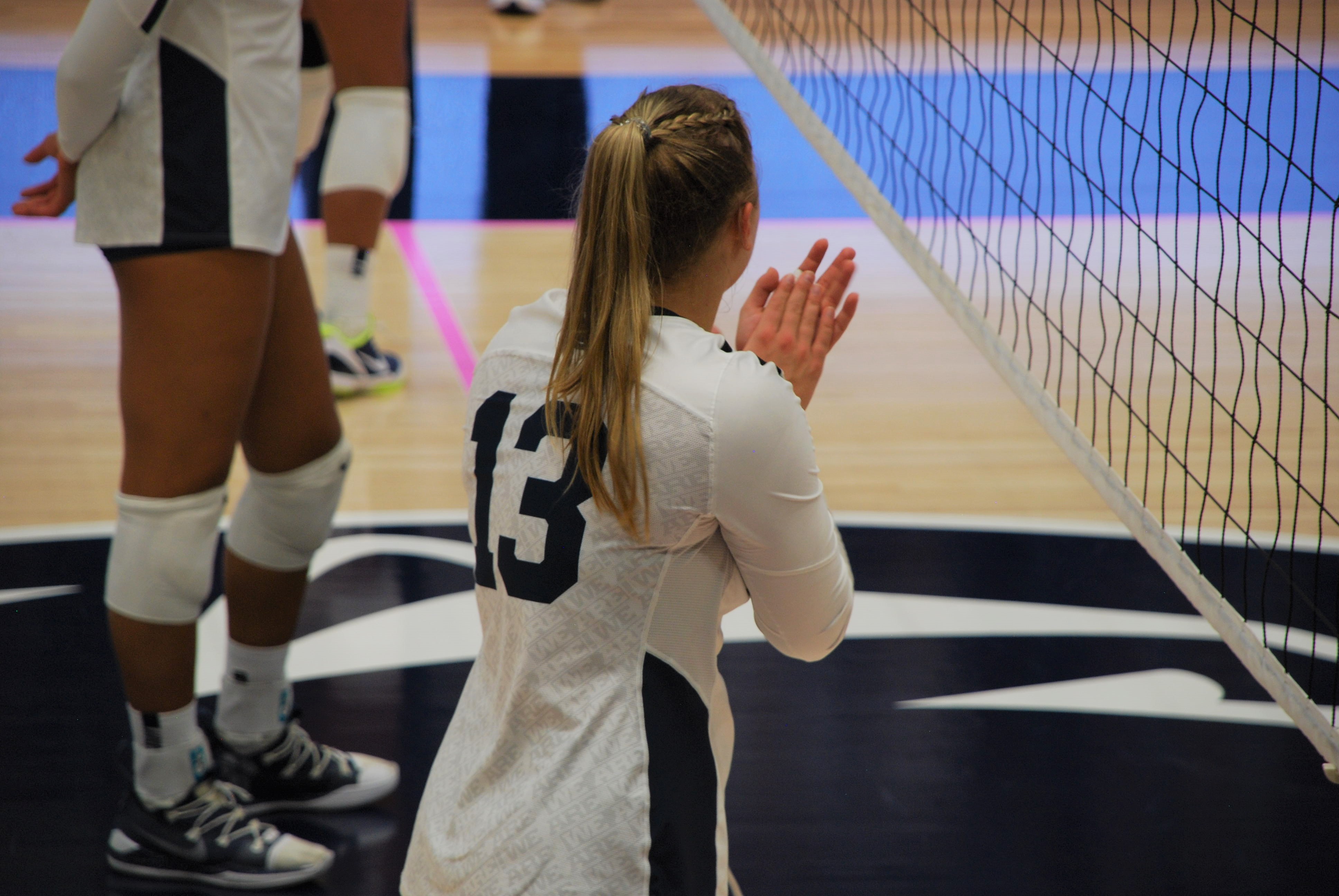 Russ Rose had the Big Ten volleyball coaches’ teleconference, so assistant coach Katie Schumacher-Cawley fielded questions ahead of a weekend road trip to Iowa and Nebraska. Gabby Blossom, fresh off her second straight Big Ten setter of the week honors, and freshman outside hitter Lauren Clark also spoke before practice in the South Gym.

Coach Schumacher-Cawley on the most rewarding part of coaching at her alma mater:

“I’m thrilled to be back here coaching with Coach Rose and just being a part of the program — to continue to make an impact and to give back to these players the experience that I had, because I had such a great experience here.”

“Iowa’s a very good team. They just had a great win against Indiana in five [sets]. We’re just working on serving aggressive. We don’t take any team lightly in this conference. Everyone has great players and I think Iowa is playing well right now. We need to serve and pass well and compete and take care of business.”

Coach Schumacher-Cawley on Penn State rising to No. 7:

“We don’t really talk about the rankings at all. I think competing in the Big Ten is challenging every weekend and we want to do our best and win these matches in the Big Ten. As far as rankings go, I guess it’s nice to talk about, but we’re looking forward to this weekend.”

“I think Gabby’s playing really well right now. She’s playing defense, she’s serving aggressive, she’s moving the ball around, and I think really starting to connect with the middles and put up a great ball for the outside hitters.”

Coach Schumacher-Cawley on where Serena Gray and Kaitlyn Hord have improved:

“Kait and Serena both work very hard every day. I think from their blocking to their attacking and just their transition work, Dennis [Hohenshelt] has been working with them a lot on their blocking and reading. They’re just getting better every day and they love to compete.”

“The volleyball community is so small and so tight. Everyone’s connected at some point. You take a step back and you realize how fortunate you are and how lucky you are to be a part of something so special, regardless of what team you’re on.”

Gabby Blossom on the excitement of the Illinois win:

Gabby Blossom on what the team is working on heading into this weekend:

“The Big Ten definitely makes it where every week is a new challenge. You can have a great week the week before, but that doesn’t matter Monday morning at practice. That’s definitely something you learn in the Big Ten is every weekend is going to be a hard weekend. It’s kind of getting over the win or the loss and then coming in Monday and being prepared and getting focused on your opponents that weekend.”

“Nebraska weekend is always a fun weekend, just because both programs are so historic in college volleyball. It’s definitely an atmosphere that, as a college volleyball player, you love to play in. Rec Hall is a great atmosphere and Nebraska also has a great atmosphere. Going there and playing in that atmosphere, obviously you wish they were your fans, but it’s still a really cool environment to play in. We treat every game the same. Obviously, teams like Nebraska, the historic part of it is different than other teams we play, but how we approach each match and each game is the same no matter what team we’re playing.”

Gabby Blossom on Jenna Hampton’s best qualities as a player and a person:

“Jenna is one of my best friends. Her defense and her passing, I mean, she’s a back-row kid and she does what really good back-row kids do really well. She’s a great asset. She brings a great energy to the court when she’s on it and at practice. She’s everything you want in a back-row kid. Off the court, she’s one of my best friends. We have a lot of fun together. People always say, ‘If there’s a Gabby, there’s a Jenna’ or vice versa. We’re normally always together if you see us.”

Gabby Blossom on her favorite type of gum to chew during matches:

“I chew gum all the time. Normally I chew Trident mint gum, but sometimes I’ll forget it and I’m like, ‘Katie, I need gum.’ Katie and Dennis always have gum, so they’ll give it to me before the game or during the match.”

Lauren Clark on making her first career start against Maryland:

“It was really awesome. It was just really fun to be able to help the team out and just be in an atmosphere that was so invigorating.”

Lauren Clark on the team’s work ethic in practice:

“I think a big thing for us is just making sure every day we get in and we try and get better. We just come together and unite, especially for a big weekend like this coming up. We really just take the time to come in early before practice and work on the things that we really need to nail to be able to perform this weekend.”

Lauren Clark on expectations for her first trip to Nebraska:

“I’m just looking forward to going to Nebraska and being in their atmosphere [at the Devaney Center], because it’s really big. It’s different than anywhere else. I’m excited to play against them and really see how we perform, because it’s probably one of the biggest matchups.”

Lauren Clark on how Allyson Cathey has helped her improve:

“She’s been a really great help. We play kind of similar, so it’s been fun to have someone who’s older than me to just help me out along the road. She’s helped me a lot with my swing and with my footwork and blocking. Just being a mentor to me, because I’m a little younger. She’s been a really great help. I hope she’s able to play this weekend because she’s really good.”

Lauren Clark on what it’s like working with Coach Schumacher-Cawley:

“She’s really great. She’s kind of like a mom, but she really is there for us whenever we need anything. She’s a positive coach and it’s really great to have her around.”