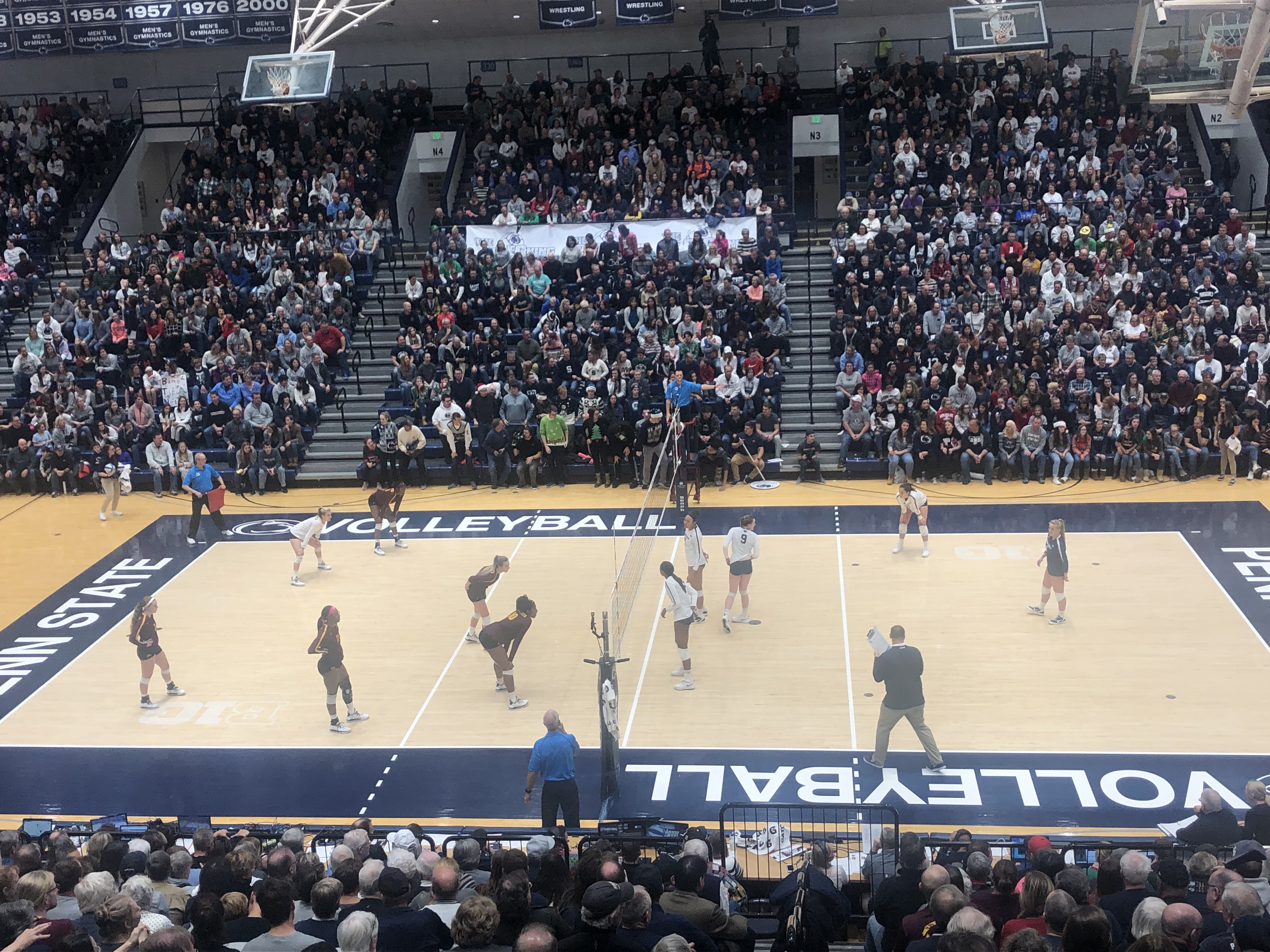 Jonni Parker led the Nittany Lions to victory with a career-high 29 kills, seven digs, and five blocks against the Big Ten champion Golden Gophers (24-3), who were previously undefeated in conference play.

Nia Reed and Kaitlyn Hord finished with double-digit kills in the win (16 and 12, respectively) and asserted themselves above the net as blockers. Hord paced Penn State’s defense with seven blocks, while Kendall White tallied a match-high 27 digs.

Seliger-Swenson and Bryanna Weiskircher battled it out as two of the Big Ten’s best setters, finishing with 63 assists apiece in the five-set thriller. Weiskircher added 15 digs, five kills, and five blocks.

The Nittany Lions (23-6) return to Rec Hall Saturday at 8 p.m. when they host No. 8 Wisconsin in the regular season finale. The White Out match will air live on Big Ten Network.

“I thought it was a really competitive match. I thought it was a terrific crowd for a period of time where we don’t have the students available and don’t have the band. We’re really appreciative of the support from the community. I thought we didn’t play a great first game, but we battled hard in the second game, and the third game I thought could have gone either way — as in the fourth game. We were down in the fifth.

“We stuck to parts of the game plan. I thought Jonni had a great night offensively and Kendall played good defense. We got pretty good production from the middles. It was a team effort and we’re happy that we were able to win tonight. It’s a really short turnaround for another great opponent tomorrow.”

“Well, what surprised me is how poorly I thought we were playing. I thought we practiced a little better, but Minnesota’s very good. Obviously that’s kind of an understatement since they were undefeated in arguably the best conference in the country. They’re a low-error team and very calm. I think it was a match where they came out and really kind of set the tempo for how they were going to play. We didn’t really step up real well in the first game, but I thought the second game we came out and played a lot better. We went from hitting .100 the first game to .360 the second game and at one point we were hitting well over .400.

“It’s a serve-pass game a lot of the time and I thought the first game we didn’t serve real tough. The second game we picked it up. In the middle games, I didn’t think our serving was real tough. When the serving breaks down a little bit, it becomes a problem. There were a couple kids that got a little tight I thought at the end of games, but Serena [Gray] serves hard. For the freshmen being freshmen in big matches like that, I think they compete pretty hard. I know they’re trying and I’m of course trying as hard as I can not to make their development go a little bit faster.”

“Jonni played her butt off. She had a great game. She had 29 kills and she came out and she swung away. She was the person to go to when we had tight situations. She was on it. She had the fire in her eyes. I always love Jonni.”

Jonni Parker on switching up her shot selection:

“I think being a smaller hitter in this conference, I have to be a little bit more aware of it than [other] people. I can’t just resort to my power hit, just banging away. I have to make sure I see the court and make sure I hit some shots as well.”

“We’re not allowed to vote for our own players, but Jonni in my opinion is the top freshman in the conference. If the other coaches didn’t think that she was one of the top candidates, I would think tonight’s match would sway their thought process a little bit. Adanna [Rollins] is a really good player and certainly when we played at Minnesota she was terrific. She’s had a really good season, but there are a lot of really good freshmen.

“Michigan State’s got a couple of really good ones. Nebraska has a couple of freshmen who are really good. I had a hard time voting for the top kids. [Katie Myers] from Maryland I think is terrific. Certainly Minnesota has a few. At one point tonight, we had five freshmen on the floor with Bryanna.”

Bryanna Weiskircher on bouncing back from a tough start:

“Oh, I was terrible in the first set, and Coach lets me know. I think that’s something that’s special about him. He’ll be brutally honest with you because he knows how good you can be. I think he’s been like that with all of us. He said it to Kendall and me both. I think both of us turned it around from the first game to the last game, trying to get the freshmen to get going and get aboard with us. It was a good team win.”

Kendall White on Coach Rose telling it like it is:

“We didn’t come here to be lied to. Coach tells us the truth about everything. That’s what we want and that’s what we need. We’re not going to get any better if somebody pats us on the back and tells us it’s okay when we’re playing poorly. He lets us know that we’ve got to fix it.”

Kendall White on whether the team has reached its potential yet:

“I don’t think we’re even close to our best. I think every single person, including Jonni even though she had a great game, could play better. All of us could. We were a little up and down and had a couple lulls throughout the game and let them back in. We could have finished them in four sets I think. Little plays here and there.

Bryanna Weiskircher on the team’s potential:

“I think there are flashes of it, but we have a lot of freshmen. They have such high ceilings and in their four years here they’re just going to keep getting better.”

“It’s like if you watch the Duke-Gonzaga basketball game, and afterward Coach Krzyzewski said, ‘Hey, physically they’re really, really good, but there’s that emotional component that you don’t know what you don’t know. For the freshmen for us, there’s been a lot of matches and weekends where one will play well one night and not well the next night. The could very well happen tomorrow and that’s pretty much between that and how health factors seem to have played in. It’s just been that type of season, but certainly for the evening it was a great win in front of a great crowd.”

“I’d like to also commend women’s soccer on a terrific season. I thought they just had a fabulous season and [head coach Erica Dambach] and the players have a lot to be proud of. I just thought they really represented Penn State in as good a way as anybody could.”

“They’re two really great players. They hit the ball hard but they’re also very tactical and that’s what makes a good player. Just hitting the ball hard doesn’t get you very far. We had a game plan to go against them and we tried to execute it. We came out and did what we could, but a great player is going to make their shots. They’re going to get their points.

Jonni Parker on bouncing back from adversity:

Bryanna Weiskircher on rallying for the win:

“Especially in that fifth game where we were down a couple of points midway and we were able to fight back to 9-9; we do that drill in practice all the time and clearly it paid off.”