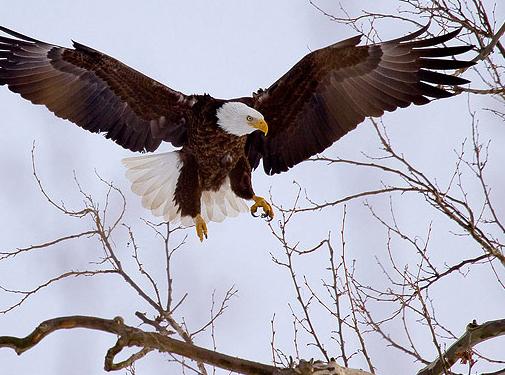 According to the “Eagle Virtual Field Trip,” an eagle can spot a target as small as a rabbit up to a mile away.  Once their prey is in sight,  they swoop down close to the ground, catching the unsuspecting animal with their razor sharp talons.

Given that a Nittany Lion is considerably larger than a rabbit, and thus much easier to spot, perhaps it shouldn’t have come as a surprise that the Florida Gulf Coast University Eagles were able to make a meal of Penn State, 25-20, during the first set of last night’s match.  They outhit the Nittany Lions, .323 to .138, and at one point were leading 17-7.

To the relief of Penn State fans, the Nittany Lions regrouped to take the next three sets by scores of 25-11, 25-17,  and 25-11.  It would be tempting to say that Penn State got a wake-up call in that first set (and not only because clichés are our friends!).  But we think it’s more a reflection that this is a very young team, and young players are unpredictable — sometimes looking great, and sometimes looking . . . not so great.  Last night apparently featured some of both.