But not for Penn State Head Coach Russ Rose:

I think the key to the match was just the energy in the building.  I thought it was an electric evening.  We’re really appreciative of the marketing people and the student support.  Just to have a crowd like that is really rewarding for these kids.

I thought we started a little sloppy and competed in the first game, even though we weren’t really clean in a lot of areas, it’s a great team victory. I thought a lot of people stepped up and did some great things.  You look at the box score and see four people in double digits, Megan hits .400 and leads the match in digs — it’s a really good night for a captain to out there and play like that with some young kids.  Aiyana was exceptional at the net, and I thought Bryanna really settled down.  It was a great match for us. — it’s the best we’ve played to date — against a really good team.  Stanford’s really good.

But the hero of the game is the [crowd of] 6,000 people who came out and made the building electric.  That’s the story.  We’re the recipient.

It’s incredible.  You make an error and then the next play you have a great play and the crowd’s right on to you again.  It’s great to know that win or lose . . . they’re always going to have your back, and give the other team another opponent to try and beat.  That’s the biggest crowd I’ve played in front of here at Penn State and it couldn’t have come at a better time.  It was just great.

Courtney said the team feeds off of the energy of the crowd, but also has its own energy:

We’re relying on the crowd, but we had a lot of team energy that we haven’t been having in awhile, so it was good to see that everyone on the court was in-it-to-win-it tonight.

I don’t think we shut [Stanford] down.  I thought we played really well.  Tonight was a special night. . . . We hit really well.  We had some great offensive performances.  But when you have seven net violations [as Penn State did] that usually comes back to cost you in other areas.  We’ll take tomorrow off,  as is the standard.  We’ll get to work on Monday.  We go on the road next week.  It’s always tougher on the road — obviously, Stanford experienced that. . . .  They saw a great venue and a great night for volleyball.  The players will remember it . . . but it’s not going to win any other matches for the rest of the year. 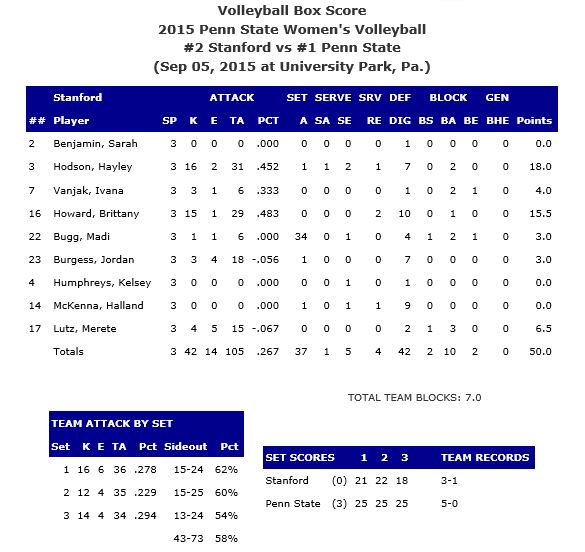 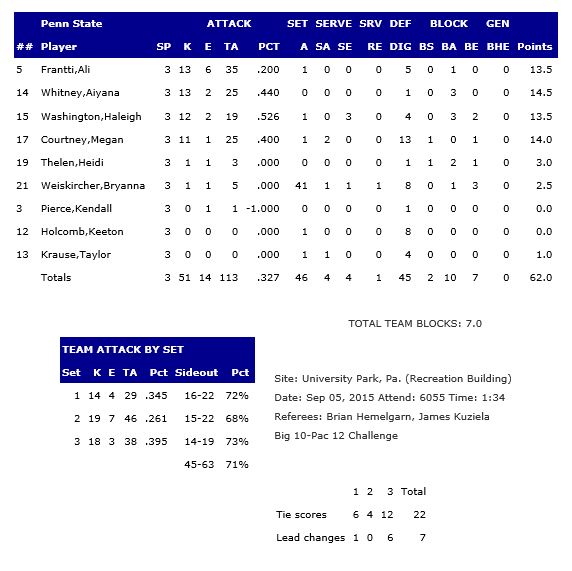