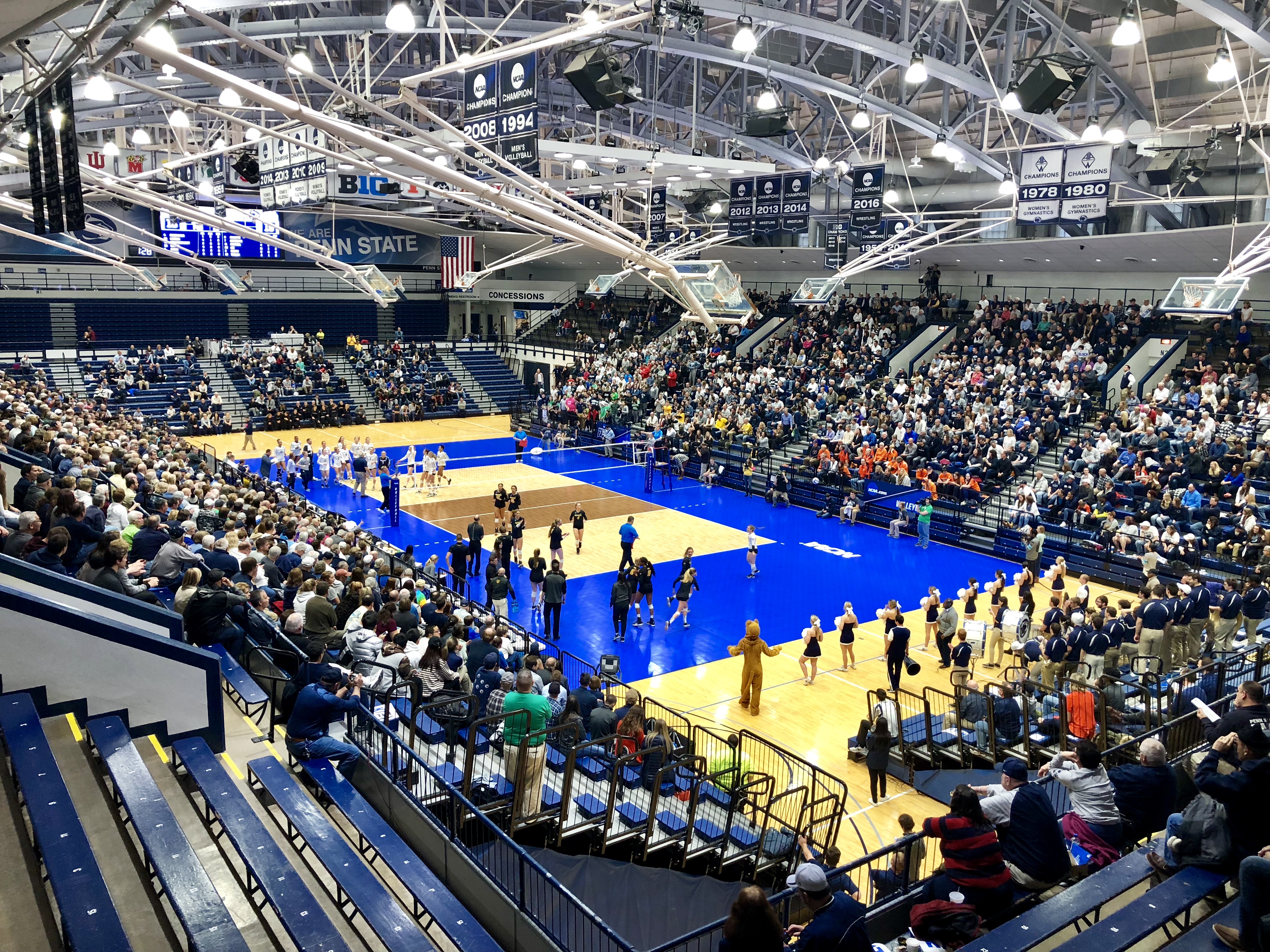 Freshman right side Jonni Parker led the Nittany Lions with a match-high 11 kills in the victory, while Taylor Leath finished with eight kills and a team-high 12 digs.

Penn State outhit the Terrapins .250 to .030 and doubled them up, 12-6, in blocks. Kaitlyn Hord, who had three kills on a tough hitting night, paced the Nittany Lions with five blocks. Serena Gray, Allyson Cathey, Nia Reed, Tori Gorrell, and Amanda Phegley combined for 18 kills.

Kendall White and Jenna Hampton continued their strong play on defense with 10 and eight digs, respectively, against the Terrapins. Redshirt senior setter Bryanna Weiskircher dished out a match-high 30 assists and added seven digs.

The Nittany Lions (12-3) return to Rec Hall Saturday at 7 p.m. when they host Ohio State. They improved to 3-2 in Big Ten play.

Coach Rose on his team’s performance:

“I thought the positive was that we had good passing off the bench. I thought Jenna came in and did a great job passing. I thought Jonni had a real nice night offensively. We moved the ball around. Taylor did a good job with serve reception. I thought we made an awful lot of hitting errors that weren’t very good, and it resulted in us hitting .250, but any time you get a victory you have to feel good about that.”

“I thought Tori came in and did a nice job and took a couple of good swings. Her first swing that she took, she hit out of bounds. She took a couple of full swings that were more reflective. I thought the best ball hit tonight was one of the balls that she hit. She’s got a great arm. When everything is lined up and the block’s looking somewhere else, she can really bounce a ball. I thought she did a nice job.”

“Hopefully we’ll be able to get our legs back when we have some practice time. Over the month that we were on the road, we had 12 days of practice in Rec Hall, so that’s not a lot with a lot of young kids to really think about having a full practice regiment getting ready for the conference that we’re in.”

“The intent was to try and get some points with her out of the game. That was the advantage of Jenna passing so well and playing pretty good defense that we were scoring points while Nia was resting. It’s a long season and if we have the opportunity to be successful, Nia is certainly an integral part with what she can do at the net.”

Jonni Parker on her growing confidence:

“I think confidence comes with experience, and a lot of the older girls and coaches help me with that.”

Taylor Leath on the freshmen:

“I think Jonni and all the freshmen that play, they come out and in the beginning sometimes you have those freshman moments, but I think that they’re really coming into their own. They’re continuing to step up and get some confidence and take big swings, make big plays all the time. Kaitlyn made a really big save today. That’s something that she maybe wouldn’t have done a couple of weeks ago. They’re definitely growing.”

“She’s easy to communicate with, so if I need an adjustment she’s open to it. She also communicates with me if I’m ever off track. I think her communication with me helps me a lot.”

“The middles, who were the only reason we were hitting above .200 the last two or three weeks of the season, hit .000 tonight. Everything has to be headed in the right direction. You’re not going to have success when you don’t have balance across the board. It’s going to be really tough to be successful in this conference and hit .250. It’s like hitting .250 in Major League Baseball. You start thinking about, ‘What did I have a degree in? Because I’m going to have to get a real job soon.'”