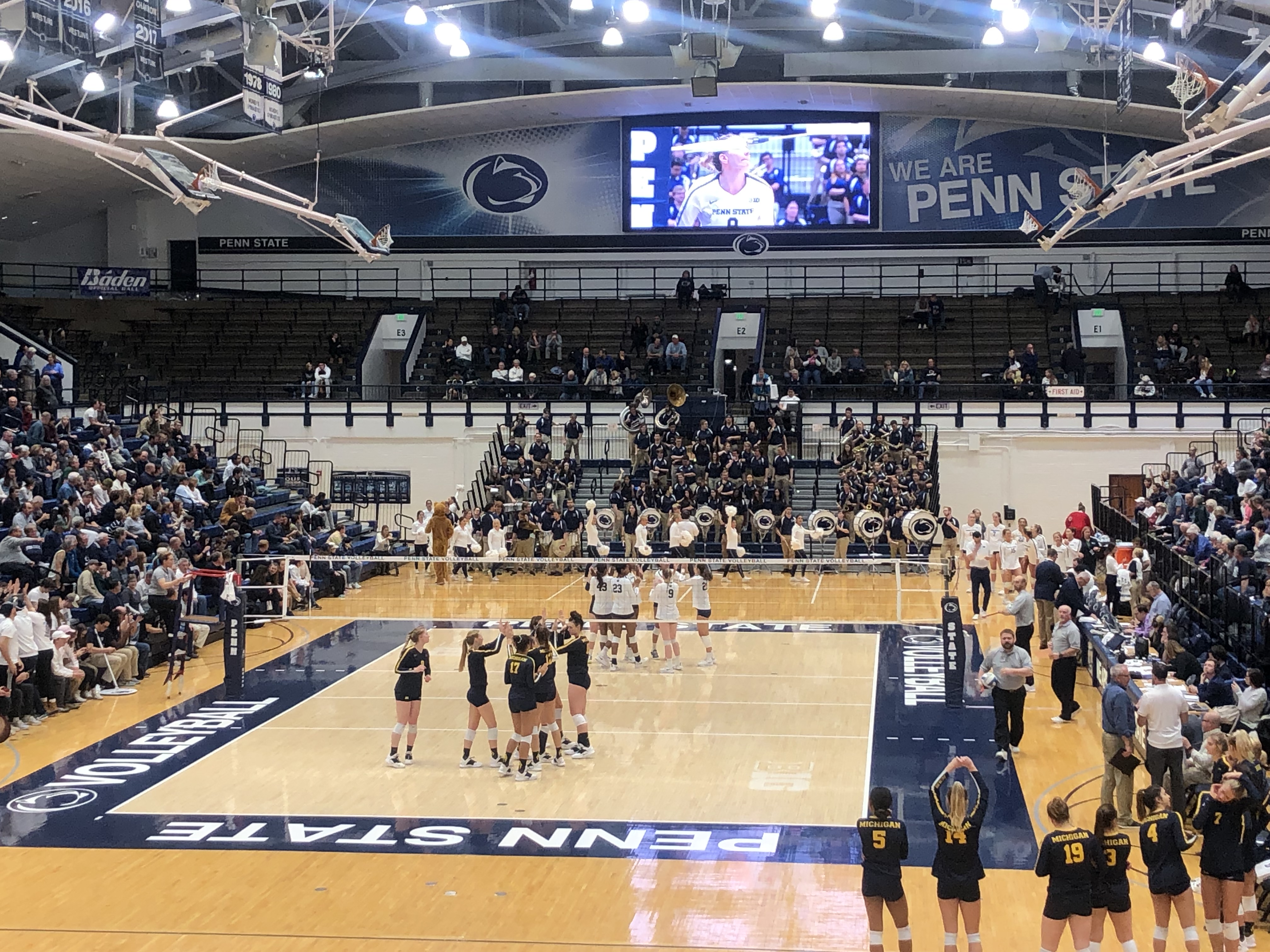 The Nittany Lions also swept the Wolverines September 30 at the Crisler Center in Ann Arbor. This time, Nia Reed and Jonni Parker led the way offensively with 16 and 13 kills, respectively.

Kendall White became the fifth player in program history to reach 1,400 career digs late in the first set. She tallied a match-high 11 against the Wolverines, who fell to 19-9 on the season.

Freshman defensive specialist Jenna Hampton drew a roar from the home crowd of 2,465 when she recorded a rare kill. She had a team-high two service aces and six digs. Penn State hit .361 as a team in the win.

“Anytime you can get a three-set victory in the conference you have to feel good about that. We certainly had our challenges finishing matches and finishing games when we had the opportunity to do that. I was encouraged by the hitting this evening. I thought we hit well. I’m really happy that Nia had a good night because she’s been battling lately and it was just a really good evening for her and Jonni and Kaitlyn. It was a good night for those three kids offensively.

“Tonight was a good night. We’re hitting about .260 for the year, so if you can hit better than your season average you feel good about that. Michigan’s a very good team. [Carly] Skjodt’s one of the premier attackers in the conference. We had challenges with her. She’s one of the kids who can go off and get 30 points against people, so for us to kind of keep her as close to being in check as we could, it was a good effort.

“I thought we made a lot of errors. Certainly we made too many service errors, and we ran into a little funk in the one game. We got aced three or four times in a row, so that was disappointing. But overall it was a good night. It was nice to get a victory after some of the disappointing losses these guys have experienced.”

“I thought on the one Taylor [Leath] just kind of tripped. The other one just hit the top of the net and fell. With this team, it seems like every match is in play until it’s done. I’m glad we won the second game. That was the same thing with Illinois. We dominated the first game and then the second game was close and we made some errors.”

Coach Rose on the upcoming weeks:

“It’s tough. Everybody in the conference is good. Everybody’s playing for something, whether they’re playing to get a bid or playing to be a regional host or trying to be a first-round host. Everybody’s playing for something. I was happy that Allyson Cathey came in and had a good night. I think we’re going to need her arm as we progress [through] the last three matches of conference play. Hopefully some of the people who didn’t have good numbers tonight can be a little better on Saturday against Northwestern.”

“I love how she’s so aggressive. She never stops swinging. Tonight she just did a really great job blocking. She was a wall out there. No one could stop her. No one could dig her. She did really well tonight.”

“Me personally, I follow in Jonni’s footsteps. I know it’s backwards but she always has a great night offensively. I just think we were comfortable being home. Being in our own gym gave us more confidence.”

Jonni Parker on mixing up her shots:

“Being a smaller hitter, I would say I’ve always had a little bit of [different] shots, but this year especially I think I’ve expanded my court shots. Because here people are even bigger than what I’ve been used to, so I have to make sure I can hit high hands or around the ball. I’m just starting to be smarter with my shots, just making sure I know when I can swing and when I need to place the ball or keep it in play or know when I can make a smart, aggressive swing.”

“I think the rhythm sort of came from the middles. They were able to open up the pins and give us confidence to swing away, so we’ve got to give props to Kaitlyn and Serena too.”

Nia Reed on her final semester:

“I’m luckily only [enrolled] in three credits. I don’t have to go to class after class like these guys. I can only imagine how hard it is for them, because freshman year my workload was crazy. I think we do a good job of getting in and getting our schoolwork done first, so when we get into practice or on the court we don’t have to worry about that stuff.”