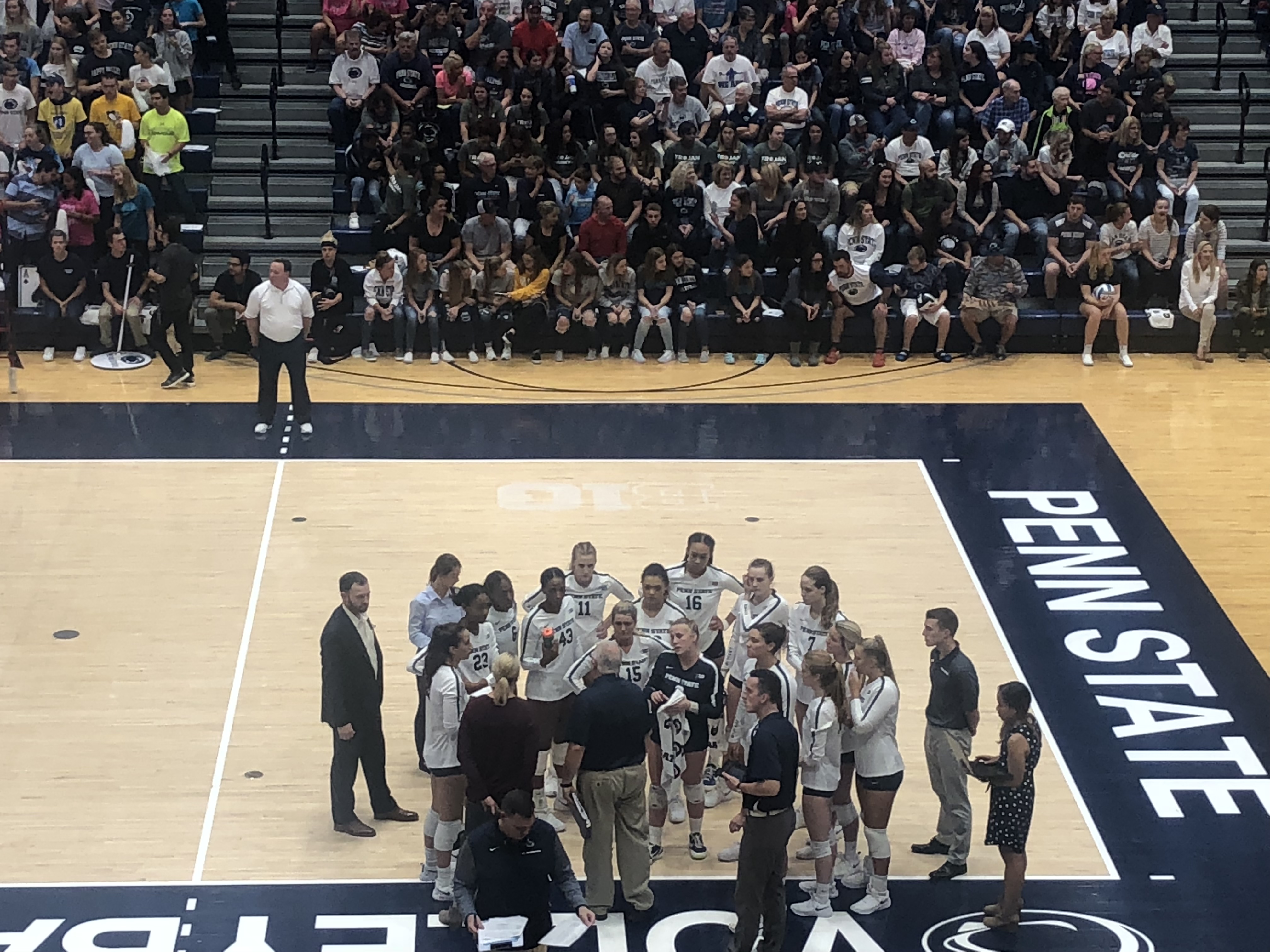 Nia Reed led the Nittany Lions to victory with a career-high 15 kills against the Buckeyes, who beat Russ Rose’s squad 3-1 earlier this season in Columbus.

Taylor Leath and Kaitlyn Hord both hit over .385 for the Nittany Lions in what was one of the team’s most consistent nights offensively. Leath, Hord, Serena Gray, and Jonni Parker combined for 25 kills in the win.

Kendall White and Jenna Hampton each had a kill against the Buckeyes, with Hampton’s coming as a direct result of Bryanna Weiskircher’s brilliance on a kick save early in the second set. Weiskircher dished out a match-high 34 assists and tied Parker with six digs. Parker intimidated Ohio State on several points with her jump serve.

The Nittany Lions (13-3, 4-2 Big Ten) travel to West Lafayette Wednesday for a 7 p.m. match versus Purdue on ESPNU.

Coach Rose on the atmosphere in Rec Hall:

“I thought it was great energy in the gym tonight. It was great to have such an enthusiastic crowd, so we’re very appreciative of the people that support the program and all the teams. I thought it really kind of gave the players a little more energy at the start. I knew they were pretty fired up.

“Warmups looked good and I think they just wanted to improve on their efforts from the last time we played Ohio State. I thought Bryanna played two good matches this weekend and has been playing well. Nia provided a real nice boost for us offensively this evening.”

Coach Rose on his team’s performance:

“It was one of our highest hitting percentages. It was on par with some of our other matches as far as number of errors, but certainly it was good for us to have a higher hitting percentage, because we’ve been hitting so much lower even though we’ve had some success. We made errors in other areas unfortunately, but I thought we did some really good things. I thought the passing was good. I thought we had a way better effort from the service line.

“The last time we played Ohio State we had no aces and eight or nine service errors. They served real well at their place and we didn’t serve well there. It’s always good to be at home. I think that was probably one of the good things. I didn’t like our blocking, but Ohio State’s a very good team. We lost to them earlier in the year when we didn’t have Nia, and tonight they didn’t have a couple of their key players. That is just part of how a season goes for teams.”

Bryanna Weiskircher on her kick save:

“Jonni picked up the tip and I was on the floor behind her because I was going for it too. I knew Serena wasn’t going to get there, so I just kind of stuck my foot out and kicked it up. Jenna was ready to go.”

Nia Reed on whether she feels up to speed:

“Yes and no. I don’t get to practice as much during the week, so it’s kind of hard for me to just hop into a game and go kind of cold turkey. I still have a lot of work to do. Like coach said, my hitting percentage was good, but I have a lot more things to improve on.”

Nia Reed on being back in the lineup:

“My mindset is totally different. When I step on the court, I always want to kill the ball, but knowing that at any point it could be your last swing, it really gives you that extra drive for sure.”

“I’m happy that it happened. Yesterday she missed a serve at a key point and I was on her pretty hard about it, because I thought the quality of the miss was so bad. She’s a good player and sometimes good players don’t play well. She plays hard all the time and that’s a type of effort that we need from her a lot. I think she has a pretty good serve.”

Coach Rose on how this year’s team differs:

“We have to serve tough. We’re not an overpowering team. We have to get good touches at the net and we have to try and get the ball to our middles. This team is just put together differently than some other teams that we’ve had. The goal is to try and find the best recipe for success.”

“She’s kind of the Energizer Bunny. She’s very excited whenever she’s out there on the court. I think it helps everyone feel confident and ready to go also. She’s someone that the block has to pay attention to, so it also opens up for the other hitters. I think she does a great job.”