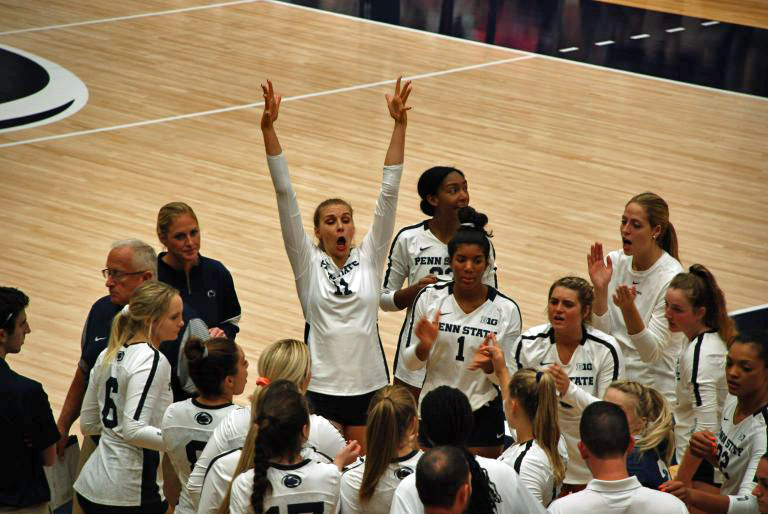 Hours after setting a career high in kills with 13 during Penn State’s morning sweep of Holy Cross, Serena Gray outdid herself once again with 18 against the Shockers. Remarkably, Gray had only one attack error all weekend long on her way to being named MVP of the Penn State Classic.

Not only did Gabby Blossom dish out a match-high 36 assists versus Wichita State, but the sophomore setter also led the Nittany Lions with three service aces in the win. While addressing the booster club after the match, head coach Russ Rose remarked that Blossom particularly likes to set the middle blockers, which worked in Penn State’s favor throughout opening weekend.

Kendall White continued her steady play to begin the season with a match-high 10 digs, while Keeton Holcomb yet again displayed her value off the bench as a veteran presence with seven digs and a pair of aces. Jonni Parker bounced back from a one-kill morning with eight in the nightcap.

Penn State hit .478 as a team over the course of its three matches this weekend, showcasing Blossom’s comfort level running the offense in her first full season as the starting setter. While there are certainly some things the team can clean up during practice this week, it was an overall impressive performance from a roster that features 75 percent underclassmen.

The Nittany Lions (3-0) head to Ames, Iowa, next weekend for the Cyclone Invitational, where they’ll face Iowa State Friday night before returning to Hilton Coliseum Saturday afternoon for a showdown against LSU.

“I thought it was a good ending to a couple of matches today. We had a number of players contribute in different ways. Obviously, tonight Serena had a terrific night offensively. I thought Allyson [Cathey]’s ball-handling was really good tonight and was in a good spot defensively. Tori I thought took some good swings and had some good touches at the net. When you have a young team, you want to get a starting point more than you want to test yourself against the top two or three teams in the country. I thought we had a good opportunity to do that this weekend. It was great to play at home and have great fan support. We’ll go on the road this next week and go play against Iowa State and LSU.”

“I thought we controlled the ball well. Serena and Kaitlyn [Hord] are two primary offensive players and Tori as a former middle is also a player when we’re controlling the ball well that she can present some really good offensive numbers as well. As long as our ball-handling is good, those three people can hit for a good percentage. The key for us is generating kills. There were some teams last night that had players who had 30 kills in a match. It’s really hard for a middle hitter to get 30 kills. If you look at that, Jonni led us with eight kills at the outside hitting position, so we would have had to play eight or nine games for her to get up to 30 kills. Unfortunately, that’s not how matches are played.”

Coach Rose on getting the ball to the middles Saturday:

“I think, again, you want to go to your strengths. It’s just part of the theory of the sport. If we can run middle, it forces the other team’s middles to identify, spend some time with those people, and then hopefully it’ll open up some opportunities for our outside hitters to get some one-on-one swings where maybe they can score or maybe they can beat the blocker or beat the digger. We’ll see next week. I saw Iowa State on TV today against Ole Miss and they’re very good, so we’ll have our hands full on Friday.”

Serena Gray on the benefits of a successful weekend:

“I think coming out with a winning record definitely gave us some confidence, especially the younger people, too. Getting everyone some experience and getting them in the game will definitely give them that cushion for big matches — knowing that they’re capable and what we’re capable of. We’re capable of passing well and running the middle whenever we have a good pass. That really shows us that we can do that in the Big Ten too if we continue to pass well.”

Tori Gorrell on the newcomers:

“It’s great having new players come in. It’s really exciting to see girls come off the bench — back row, front row — and make an impact on the game. Or if we’re just flowing really well and not changing anything, it’s just good to have them come in. New players are always exciting every year. There’s a new team. I’ve been here for five years and I’ve been with new girls every single year. It happens. It’s a regular part of sports. It’s really fun to have girls come in and bring lots of energy.”

Coach Rose on not having any blocks in the first set:

“[Wichita State] didn’t hit a lot of balls. They had 20 attempts and a lot of them were down balls, but we didn’t have a lot of blocks either today. There were just a lot of errors. We started out making a number of errors and so did they. Both teams have a lot of young players and we’re an okay blocking team. I thought we were probably a better blocking team last year, but I think Allyson’s a good blocker. I think once we get Tori straightened out, I think Tori can block well on the right side. Obviously, Gabby’s not going to be a big blocker, but Bryanna [Weiskircher] had good size as a blocker. A lot of times blocking is just kind of a reflection of what the other team is doing offensively. If they’re not controlling the ball great and they’re just hitting the ball in different ways, you’re not going to have as many opportunities. Or, if they’re controlling the ball and they’re just doing the things they want to do, they might be hitting tactically more than really trying to score. They’re just trying to attack you in different ways. There are some matches where you don’t get a lot of blocks and there are some matches where you get a lot of blocks and lose. In this case tonight, what we did really well was we had about four errors per game. Other than the fact that we had a number of errors early in the first and third game, I thought we did really well. Somebody had two errors early in the first and third game and yet we only averaged four, so that’s pretty good.”

Allyson Cathey on something she’s learned about college volleyball:

“I would say just being aggressive and leaving it all on the court. I felt like last year I was kind of in the shadows and a little timid, but now that my role has changed on the team I can’t afford to be timid. I have to go out and be aggressive, and, like I said, leave it all out on the court.”

Coach Rose on what the team needs to work on:

“Other than Kendall’s last serving run — Serena has a really good serve — other than that that was the first real example of somebody else having a good run of serving. I thought at the end Allyson had a couple of good contacts on her serve. Tori, traditionally, has had a pretty good serve, so we may revisit her serving, but we have to serve better as a team I think. Serving will impact your blocking for sure. Our numbers will change drastically once we start playing some other teams. It’s just a reflection of the teams you’re playing. I’m not going to get over-excited about our hitting percentages or anything like that. It’s like Major League Baseball. Whoever’s leading the league in hitting after the first week of the season, there’s no lap money, so it’s the same way at this point in time. There’s really nothing to be gained by getting too excited about where you are. It’s a starting point with how people played and you have a good barometer. You have a little video. You get to talk about certain things. We also have an opportunity to look at some teams that we’re going to play. The teams we’re going to be playing are going to be challenging. Certainly the teams we played this week, Hofstra won their conference last year. Wichita State has had great success in their conference. They have a young team and I’m sure they’re going to get better. Those are part of the things that you experience early in the season.”