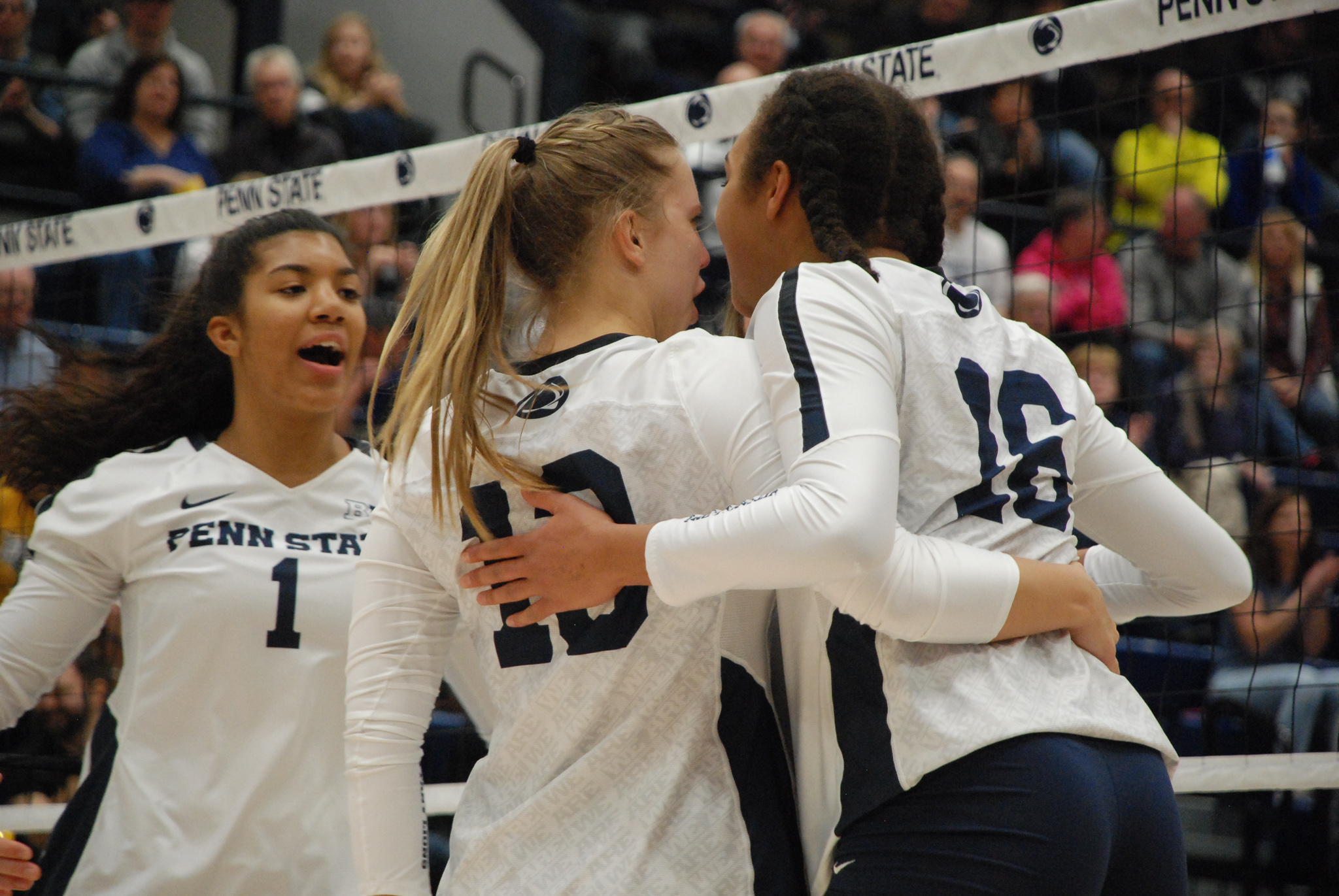 On the second Friday the 13th of the year, sophomore setter Gabby Blossom made her own luck with a match-high 54 assists, nine digs, five kills, and four blocks in the victory. She came just shy of her 12th double-double of the season.

Four Big Ten teams advanced to the regional finals, including Nebraska, Wisconsin, and Minnesota. The perimeter of the court installed by the NCAA sported a strikingly blue color that was captivating to the eye.

Jonni Parker led the Nittany Lions, who hit .445 as a team to improve to 6-0 all-time against Cincinnati, with 17 kills, four digs, and three blocks. Jordan Thompson was as billed with a match-high 30 kills on a whopping 71 swings for Molly Alvey’s Bearcats. Russ Rose is now 104-31 in the NCAA tournament and 1,299-211 overall as a head coach.

The Nittany Lions outblocked Cincinnati 14.5-1 and sided out at a ridiculous 92 percent in their fourth-set win, but surrendered 16 service errors on the night. Maria Mallon, the 5-foot-9 spark plug of an outside hitter for the Bearcats, was outstanding on both ends of court with 19 kills and 15 digs.

Kaitlyn Hord put together an extremely balanced night with nine kills and a match-high nine blocks. Freshman Lauren Clark made her fourth career start at outside hitter for the Nittany Lions and contributed four kills, two digs, and two blocks. Allyson Cathey was again in uniform but has yet to make an appearance in this year’s tournament.

Senior libero Kendall White paced Penn State’s defense with 14 digs and is now 17 away from becoming the first Nittany Lion to reach 2,000 for her career. She added six assists, an ace, and a kill in the win. Fellow defensive specialists Jenna Hampton and Keeton Holcomb had five digs apiece. Though the play resulted in a Thompson kill, Hampton made a ridiculous, one-handed diving save in the fourth set before Penn State eventually closed things out in the fifth.

The Nittany Lions (27-5, 17-3 Big Ten) will face No. 3 seed Stanford Saturday at 10 p.m. ET on ESPNU back at Maples Pavilion. The then-No. 1 Cardinal beat Penn State 3-1 on September 13 at Rec Hall and now the all-time series between the two winningest programs in women’s college volleyball is tied 12-12.

“I’d first like to commend Cincinnati on a great match and their seniors for a great season, especially Jordan Thompson, who is as advertised as an incredible player and competitor. We battled, and unfortunately we had to battle ourselves quite a bit, because we continued to make it harder on ourselves than I thought was necessary by missing so many serves in critical times. I thought we battled hard and these two individuals, [Jonni Parker and Tori Gorrell], had great nights hitting, as did Serena [Gray]. We gave ourselves a chance to extend the match after winning the fourth game and played a good fifth game.”

Jonni Parker on the team’s confidence level heading into the fifth set:

“I think after the fourth set we all had a lot more confidence, especially with our hitting numbers. Our passers and defenders gave us great confidence going to attack a ball. We knew, no matter what, that would give us a chance to go after it again. We had a slow start, but afterward we got our confidence and kind of brought it together more as a team and just got after it.”

Tori Gorrell on Gabby Blossom’s performance against the Bearcats:

“Gabby did a tremendous job of spreading the offense really well, and our middles were holding, so it was an easier night for the pins to get some swings in there when the middles and the setter do a great job.”

Coach Rose on additional takeaways from the win:

“I thought our passing was really solid. I thought our serving was terrible. That’s a real challenge, because I’m in charge of serving, and the players themselves are really the ones who have possession of that skill unto itself. That really made it a lot harder than it had to be. I made a couple of subs, and the subs went in and missed their serves. It just kind of kept on getting worse as the match went on, but the passing always gave us an opportunity. I thought Gabby competed really well. We’re not real pretty, but for us to hit .445 in a match where we missed 16 serves and had two digs after the first game is really strange. It was kind of a puzzling match, but again, they’re a different team and a tough team to play, because if the game is close, Jordan can win the game. It’s as simple as that. Whether she’s in the front row or the back row, she’s that talented of an attacker.”

Jordan Thompson, fighting back tears, on her final match playing for Cincinnati:

“It’s crazy to think where we started when I was on this team and when I first got here to where we are now. If somebody would have told me that we would be at the Sweet 16 giving Penn State a run for their money and we’re not even playing our best, I would have been really surprised. I think it just goes to show the amount of work we put in and just the amount of trust that’s been built in this program. I just feel really blessed to be able to play for such amazing coaches and have such amazing teammates. It really made this experience special because of the people.”

Molly Alvey on how this season has changed her Cincinnati program:

“Hopefully, it will put Cincinnati on the map a little more. We’ve always had a historically strong program, but I think what Jordan and what this team have done has really said something for us and our university. It’s such a beautiful place and really beautiful facilities. I think we’re all proud to represent the University of Cincinnati.”