Jonni Parker and Gabby Blossom tallied double-doubles for the Nittany Lions, as Parker tied Serena Gray for the team lead with 13 kills against the Terrapins, who fell to 9-8 (1-4 Big Ten). Blossom dished out a match-high 43 assists and added 12 digs in the win. Parker also led all players with three service aces.

Kendall White turned in an excellent performance Friday night with a match-high 21 digs and five assists. She passed Kim Kumfer for second place on the program’s career digs list early in the first set and is now 253 digs away from breaking Kaleena (Walters) Davidson’s record.

Maryland hit .500 as a team in the first set thanks in large part to the standout play of Erika Pritchard and Katie Myers. Penn State did a better job limiting the Terrapins’ production in the second and fifth sets, but struggled at times to create momentum, especially in a lackluster fourth set in which the Nittany Lions hit .000 as a team.

Whatever White or Penn State’s other leaders said during the last intermission translated into a dominant showing in the final frame. The Nittany Lions hit .438 and were a perfect 6-of-6 on side outs to seal an important conference victory. Allyson Cathey finished with 11 kills and seven attack errors, while Tori Gorrell (nine kills, .571) and Kaitlyn Hord (eight kills, .368) chipped in efficient evenings offensively. 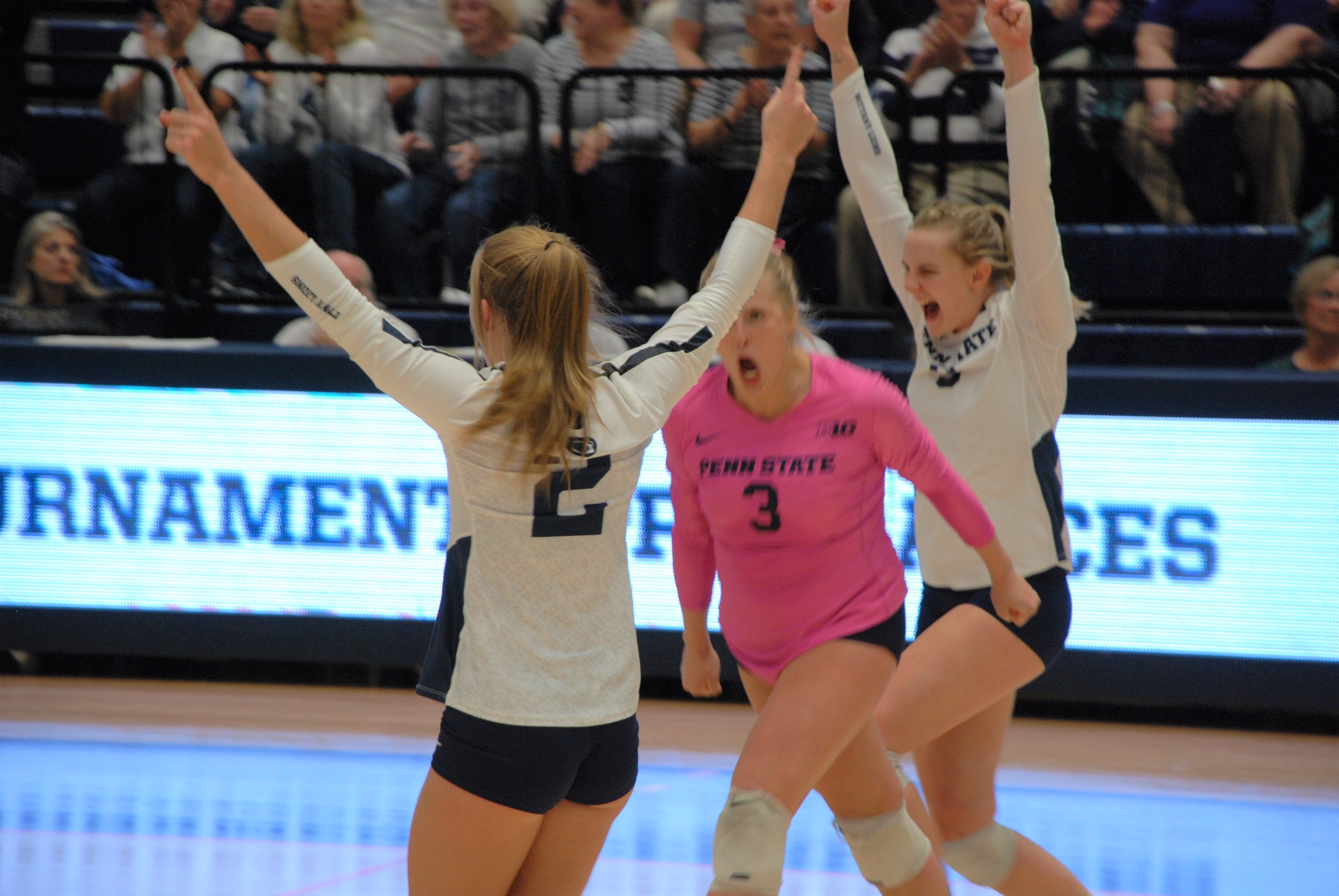 “I thought Maryland played really well, and I’m not surprised. They had a near-perfect first game and we really had to battle. I thought we had a few players put in really good performances. It was a typical Big Ten match where you have to play really hard and battle to the end. I think that’s an indication of how competitive the conference is and a reflection of how competitive Maryland and their program is right now. I’m especially proud of Adam [Hughes] and Kristin [Steadman] because they spent a great deal of their youth and time here at Penn State. I’m happy that we won and saddened for their result, because I know how hard they’re working. We’re going to have to play a lot better if we hope to beat other teams. I don’t think we’re very good in a lot of areas.”

Coach Rose on takeaways from the match:

“I don’t know if it’s so much a learning experience, because we’ve had a lot of these ups and downs in other matches. We need to be ready to play all the time. I don’t think we were totally defeated after the first game even though Maryland hit .500 in the first game. They were exceptional. Everything we did, they had an answer for. They’re leading the conference in blocking and they’re very physical. [Erika] Pritchard, as I identified earlier in the week, is one of the outstanding attackers in the conference, and we didn’t have a real remedy for what it is that she can do. I would have thought we could have scored a little better in certain areas, but we had to battle and I thought we battled. I thought Keeton [Holcomb] played really well today. I thought she passed well and kept her serve in play, which was a good improvement from the last time we teed it up. I thought we received really favorable work from Emily [Sciorra] when she came in. It’s nice to see a couple of seniors provide some good production in their senior year.”

Coach Rose on playing a familiar face in Adam Hughes:

“I just care so much for him and his family. I want him to win every match he plays other than when he plays us. He was an incredibly loyal guy and there’s just not a lot of loyal people in the world. There are a lot of people who say one thing and do another thing and they think it goes unnoticed. He was a guy who was incredibly trustworthy from the first time I dealt with him until today.”

Emily Sciorra on the biggest key to Penn State’s victory:

“Well, I won the coin toss going into the fifth set, so that was exciting. I think definitely having service pressure to keep them out of system is always huge. I know, for me, I need to come off the bench and have energy, keep my serve in, make some plays. That’s always our role coming off the bench. I thought the girls did really well bouncing back after we had some tough times out there, but I think overall, our fight, we all came together and knew we had that game and took care of business at the end there.”

Coach Rose on Penn State’s defense in the fifth set: