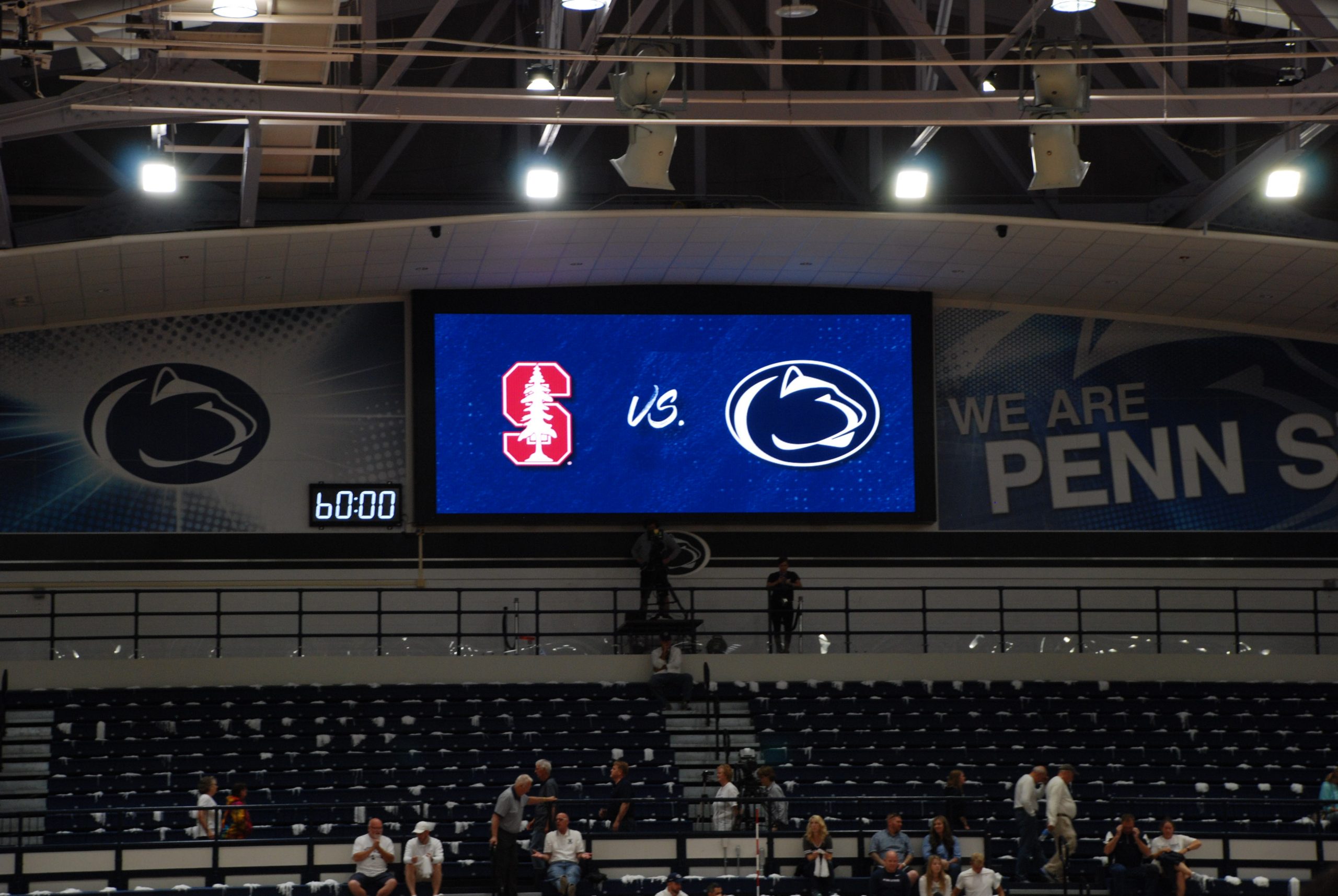 Although it will certainly be interesting to see how Nebraska responds against Wisconsin after already being swept by the Badgers twice this season, it’s a near certainty that the Nittany Lions (27-5) and Cardinal (27-4) will provide another instant classic when they take the court in the nightcap at Maples Pavilion.

Stanford has won two out of the last three NCAA championships and currently holds an 8-7 lead over Russ Rose’s squad in terms of national titles. After falling to Kathryn Plummer and the Cardinal 3-1 on September 13 at Rec Hall, Penn State has now lost three in a row in the storied rivalry, which sits at 12-12 all-time. They’re also the only two teams to have played in all 39 NCAA tournaments since 1981.

“It’s a team that’s capable of putting a streak together similar to the one that we had a number of years ago,” Rose said in September. “I have great admiration for the fact that they’re playing the schedule they’re playing this year, because they’re playing a great collection of the top teams. I know, having been in that position, that you have a choice to make.”

Stanford won both matches against the Nittany Lions in 2018, including a 3-1 victory in the Elite Eight, plus a sweep at the beginning of the season in the Big Ten/Pac-12 Challenge in Palo Alto. The year prior, Penn State won both matches at neutral sites (3-1 in College Station and 3-2 in Champaign).

The Nittany Lions swept Stanford on September 5, 2015 in Rec Hall before the Cardinal returned the favor the following season on September 4, 2016 in Boulder, Colorado. Needless to say, the implications of Saturday’s anticipated match are enormous for the two winningest programs in women’s college volleyball history.

“We’ve been playing Stanford for a number of years,” Rose said. “It’s been a cycle that we do by choice. It will be a real test for us. Stanford has five [All-American] seniors, including the two-time defending AVCA Player of the Year, so that’s a big challenge.”

Plummer, who is ineligible for this year’s award after not playing in the requisite 2/3 of her team’s sets during the regular season due to injury, tied teammate Audriana Fitzmorris with a match-high 18 kills in Stanford’s win earlier this season at Rec Hall. Plummer had 29 kills, 10 digs, and seven blocks in a 3-2 win over Utah in the Sweet 16.

“We don’t have anybody who hits as hard as Plummer, and that includes any of our male practice players or staff members,” Rose said. “And we recruited her as well. That’s always why I wanted to play Stanford. It gave me an opportunity to see the players I recruited but didn’t get.”

Rose has crossed paths with the Cardinal coaching staff countless times on the recruiting trail during his 41 seasons as head coach of the Nittany Lions, which inevitably means he knows the Stanford roster quite well on a yearly basis. The final decision of many of the nation’s top prospects often comes down to the two coastal powers.

Stanford libero Morgan Hentz, who has a program record 2,256 career digs heading into Saturday night’s match against the Nittany Lions, tied White with 22 digs earlier this season at Rec Hall. White, on the other hand, holds the Penn State record with 1,983 and counting.

“Both of them are exceptional players and valuable parts of their team’s performance and play,” Rose said. “We recruited Morgan as well, so I’m very familiar with not only her play as a club player but also how she’s played in college, because we’ve played against them all three years previously.

“She’s an exceptional talent and I thought she would have fit in really well here, but I’m not somebody who worries about what I don’t have. I’ve enjoyed the contributions of Kendall. I think she’s really played well for us. She plays hard and she embraces the culture that we have about playing hard every day. I think it will be two players who play that position really well.”

Following the four-set loss to the Cardinal earlier this season, White discussed her impression of Stanford and how important it was for the Nittany Lions to test themselves against such a high-quality opponent despite the setback.

“They’re a great team,” White said. “They’re big. And it’s nice to know that they’re not invincible. I know a lot of people think that. We gave it a good fight. We didn’t get what we wanted, but it’s good to see big people and different people, different styles of play. It’s good to see early in the season.”

Alisha Glass Childress, arguably the best setter to ever play for Rose at Penn State, joined Stanford’s staff as an assistant coach this offseason. She led the Nittany Lions to three straight national championships from 2007-09 and a 142-5 record during her four years on campus, but is now on the opposite sideline of her former team.

“I’m always happy when my former players go into coaching,” Rose said in September. “Alisha’s pedigree is a coaching pedigree. Her mother was a very successful high school coach and was her coach. Her grandfather, who just recently passed away, was a very successful basketball coach at Northwestern, as well as a former basketball coach in the high school ranks in Michigan.

“I’d rather not be playing against my former players who are coaching, but I’m happy that following her career playing on the U.S. national team that she went into coaching.”

Tori Gorrell, who hit .519 with 15 kills and five blocks in Penn State’s 3-2 win over Cincinnati Friday night, said the team’s familiarity with Palo Alto and Maples Pavilion is certainly beneficial on such a big stage.

“I definitely think it helps,” Gorrell said. “Stanford has a really cool venue. It’s a great atmosphere. They’ve got great fans. Being out there, I know that our [Penn State] alumni association in California is one of the biggest in the country, so I think we’ll still have a lot of fans there. I think it will be really helpful that we’ve played there before.”