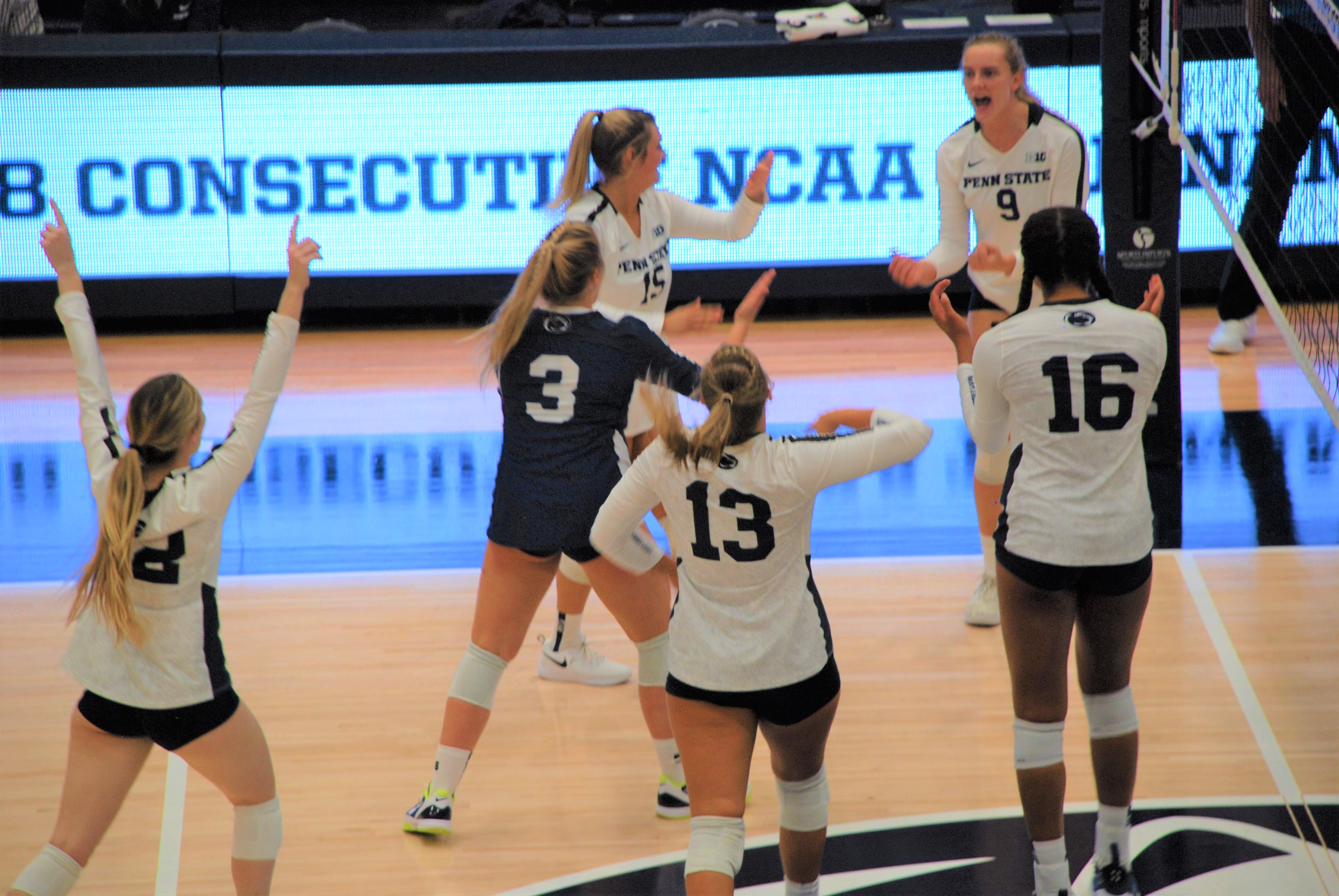 The Nittany Lions improved to 54-0 all-time against the Hawkeyes, who remain winless in Rec Hall in 28 trips to University Park. Kaitlyn Hord, Jonni Parker, and Serena Gray combined for 28 kills to lead a Penn State offense that hit .422 on the night to Iowa’s .165. Hord had a match-high five total blocks, while Parker and Gray each had two of Penn State’s seven service aces.

Gabby Blossom dished out 36 assists and five digs in the victory, while Keeton Holcomb made her third consecutive start for the Nittany Lions and tallied five digs. Two-time All-American Kendall White finished with a team-high eight digs. Penn State outblocked the Hawkeyes 8-2 and sided out 75.9 percent of the time.

Sophomore Amanda Phegley made her season debut in the third set and connected on all three of her swings for a perfect 1.000 hitting percentage. Defensive specialist Macall Peed was Penn State’s lone freshman to see the floor Saturday night, recording two digs and two aces. Iowa fell to 7-8 (1-3 Big Ten) on the season.

“I thought we started really well. The first couple of games we were without a hitting error. Other than a number of service errors, I thought we played really well the first couple of games. We hit well. Especially Kaitlyn and Serena I thought hit really well. Amanda came off the bench and gave us a real needed boost at the net. Based on how we finished the match a couple days ago against Wisconsin, I was pleased with the effort tonight. We didn’t practice very well and it’s a challenging conference. You need to pick yourself up when you get beat and you’ve got to find a way to keep on focusing on the things that are important.”

Kaitlyn Hord on positive takeaways from the match:

“I think, this time around, we played for each other. I had a lot of fun out there tonight. We were making eye contact with each other. It was just a really positive environment and everyone was playing for each other, so I think that was the main difference.”

Gabby Blossom on Penn State’s strong passing against the Hawkeyes:

“I think we passed really well. It allowed us to run middles and our middles were really good like they normally are. That opened up the pins to be able to score some. When we pass, we’re a pretty good team. We passed really well tonight.”

Amanda Phegley on what Penn State did well:

“I just think we played really well as a team. I feel like everyone was together. As Gabby said, we spread the ball around really well and got everyone involved. I think that really helped run the offense.”

Kaitlyn Hord on the importance of winning long rallies:

“Those big rallies help a lot. I know there was one — I wasn’t in it — but on the bench I was just watching back and forth. It just fires us up. The crowd tonight was really amazing with Homecoming and everything. The crowd gets us in it. Our ‘benergy,’ which is our bench energy, really got us going too. It was a good night.”

Gabby Blossom on going after every ball:

“We pride ourselves on going hard for balls. That’s something Coach [Rose] is really big on is we go hard all the time. Maybe not always to his standards, but those other rallies, we tried to win. That’s what makes volleyball fun. We’re going to go hard throughout. We have a great home crowd. We have a great student section, so them getting involved definitely helps.”

Gabby Blossom on what Amanda Phegley brings to the court:

“She hit 1.000, so I think that speaks for itself. Phegs has the ability to hit a really fast ball that’s really hard to defend. It’s hard to defend in our gym. It’s hard for other teams to defend it. She kind of brings a different option to our offense. I can tuck the ball behind and she’s going to be able to go hit it. Hitting, I mean the numbers speak for themselves, but she brings a great vibe on the court. [The team] talked a lot about tonight that the energy was really good throughout the game. I think that’s something we’ve struggled with and Phegs is a person who can come in and help the energy and make it keep running smoothly, which, coming in off of the bench, that can be hard sometimes, but she came in and was ready to go.”

“I didn’t start it off very well, but that’s definitely something that was not good tonight. It’s something we need to be better at, especially at home. Coach [Rose] always talks about being able to serve well at home, so that’s definitely not a stat we’re proud of.”

Coach Rose on Penn State’s serving as a whole:

“I think a good ratio is probably 1:2. We had seven aces and 13 errors. That’s not bad, but certainly when you’re hitting over .500 you don’t need to have any service errors, because you’re hitting over .500. You don’t need to give the opportunity to the other team. The score was 21-19 [in the third set] because we had missed 13 serves and given them the opportunity to have points without having earned the points the old-fashioned way. If we’re hitting it hard and we’re missing the serve close, it’s one thing. But if we’re hitting balls into the bottom of the net and we’re hitting them carelessly, that’s a bigger problem. I think it was a nice crowd tonight. Homecoming weekend is always a great weekend. It’s great that the football team had success today and we’re appreciative of the fans supporting us and coming out and watching. We’ll get in the gym and try and get better for next week’s matches.”

“In the Wisconsin match, we scored 13 points the last two games. I was really disappointed in how we competed and disappointed in just the whole situation. We are what we are. We’ve got a lot of young players and we’ve got a few seniors. I don’t think they’re good leaders. They’re just nice young people. The reality is, if you want to have success, it rests on you. You can’t wait for somebody else to do it. That’s the message that these guys have to figure out. They can’t wait for somebody who can’t take care of themselves to take care of them. That’s how life is.”