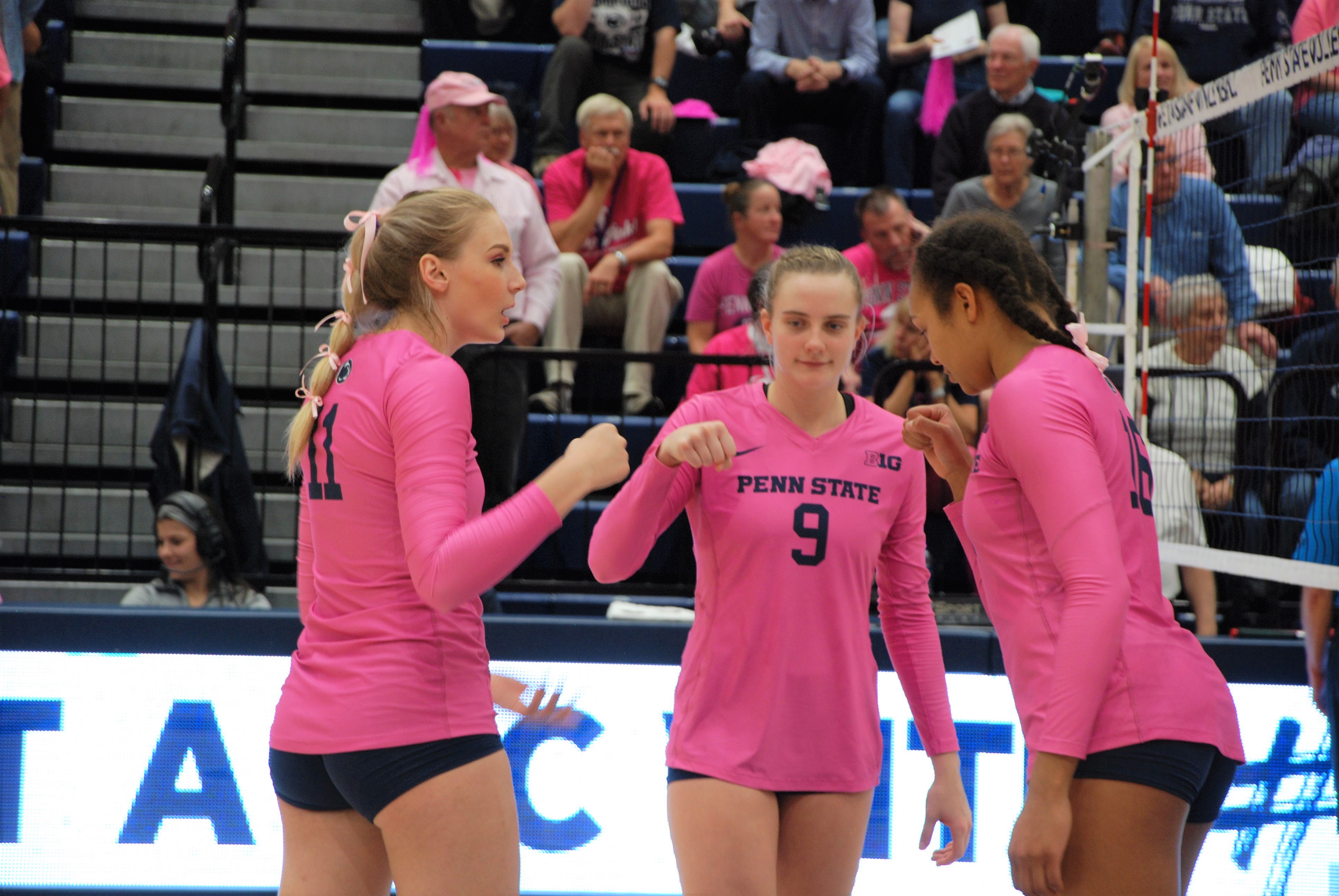 Jonni Parker led the Nittany Lions offensively with a match-high 12 kills, while Tori Gorrell and Serena Gray added nine apiece in the victory. Gorrell was by far the match’s most efficient hitter with a .571 clip. Penn State hit .368 as a team to Ohio State’s .073.

Gabby Blossom did a nice job distributing the ball against the Buckeyes, who fell to 9-9 (2-4 Big Ten) on the season. Blossom finished with a match-high 35 assists, six digs, a block, an ace, and a smooth dump shot for a kill in the second set. Kendall White had an excellent 32-dig weekend after posting a match-high 11 Saturday night. She also tallied four assists and an ace. There was a particularly fantastic stretch in the third set in which White went into the bench for a save and moments later laid out to keep the ball alive.

Senior defensive specialist Keeton Holcomb, who continues to start for the Nittany Lions, registered six digs and an ace, while Allyson Cathey had three kills and three errors on a rather quiet night for the sophomore outside hitter. Penn State outblocked the Buckeyes 7-3 and never looked intimidated by Ohio State’s largely one-dimensional offense that flowed through Jenaisya Moore (12 kills). Penn State now owns a 50-16 lead in the all-time series against Ohio State.

The Nittany Lions (12-3, 5-1 Big Ten) travel to Ann Arbor Friday for a 7 p.m. showdown against the Michigan Wolverines at the Crisler Center. They wrap up their weekend road trip with a televised match against Michigan State Sunday at 2 p.m. on ESPN. 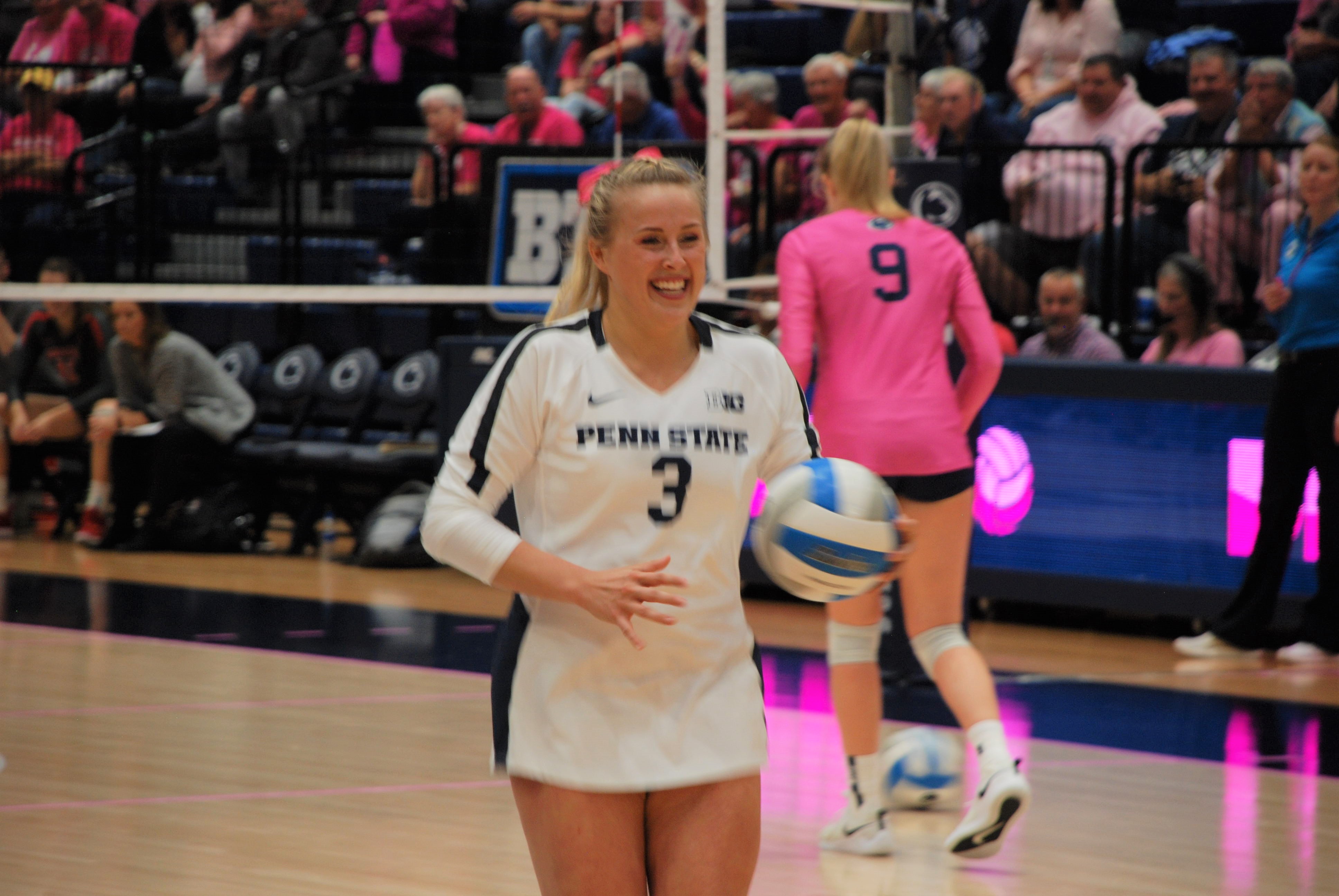 “I thought it was a much better performance tonight. I thought it was a great crowd and it was great that they would come out and support a really important cause with the Dig Pink night. I thought we played a lot better, especially in the areas where we didn’t play really well last night [against Maryland]. I thought we got the ball to the middles well. I thought Serena, Kaitlyn, and Jonni played especially well offensively. We had good distribution, so it was a good night for us offensively. We limited our errors other than we had a few soft spots on serve reception, but I think Ohio State serves the ball tough. They’re a very physical team. Every team in the Big Ten has their own style of play and strengths, and you have to find a way to match up what they do with what you do. We played very well tonight.”

“You realize that half of your schedule is played at home and the other half is played on the road. You just have to be able to concentrate on the skill set that you’re supposed to focus on and just recognize that’s par for the course. We’re playing in the Crisler Center, so it’s a much larger venue than normal when we play in their other facility. It’s an exciting opportunity. There are two great opponents next weekend. We played Michigan State, so we’re familiar with them, but I haven’t looked at Michigan so I don’t know anything about them. We played Michigan State earlier in the year and I saw them play last night against Nebraska and play very well.”

“Yes, but I would like the same motivation against every opponent. We’ve got to come in with the same energy, the same attitude every time we play, but personally I might have had a little bit of motivation.”

Kendall White on her responsibilities as a leader:

“I would say that I’m a pretty vocal leader on the court. I mean, I’m a pretty loud person in general and I’m a senior, so I’m the most experienced person on the floor. I guess just talking to the girls, telling the hitters and blockers what I see versus what they see. Defensive perspective is completely different than an offensive [perspective] and person at the net. Just giving my opinion and trying to keep the girls motivated any way that I can.”

Jonni Parker on what Penn State needs to do in Big Ten play:

Kendall White on respecting every opponent in a loaded conference:

“Because the Big Ten is the best conference in volleyball, you need to respect every single team that steps on the floor on the other side. No one’s just going to give you a game. Everyone’s going to fight in their own way. Like Coach [Rose] said, each team is unique. Each team has their strengths, each team has their weaknesses, and I think you have to find that and play to that. That starts with scouting and things like that. I also think that our team specifically is still younger and we have a lot of potential and a lot of upswing still. Unlike some teams that are older, it’s really nice that we know that we can get better throughout the year and keep going up.”

“Well, the first one she hit was certainly a visually interesting thing.”

“It was shocking, to say the least, because she didn’t hit any of that in warmups. It was a heavy serve. She’s a big girl. She’s 6’6″. It’s a high angle and it was a heavy ball. She hit it pretty hard, but it’s still a serve so you’ve got to pass it.”

Coach Rose on the importance of closing the door when possible:

“I think everybody’s talented. Even if you give yourself a little lead, there’s always going to be a little point in time where the other team is going to stage a rally and get back in the game. You have to close the door if you can close the door and not be surprised when somebody gets hot and comes back and beats you. We had a couple matches last year where we should have put people away and we didn’t do it. That was with a few more veteran players, so this year when we do things like that I’m not necessarily surprised. If we can beat a conference opponent 3-0, I think it’s a really good effort by our kids tonight.”

Serena Gray on what Tori Gorrell is doing well lately:

“It looks like tonight she hit pretty well. [She hit] .571 as a pin, but then she can also hit in the middle. She’s getting more involved in the back row serving. She has pretty decent defense, so it should be fun to see her get on the court.”

Kendall White on Tori Gorrell’s role as a mentor:

“She’s also an ex-middle and she helps teach these young girls little things that, even though she’s a smaller middle, she has to learn how to give shots. Helping them learn new shots, too. She’s a good teacher when it comes to things that they don’t know and they haven’t learned yet.”

Jonni Parker on Tori Gorrell’s value as a blocker:

“I think Tori’s one of our key blockers, too. She’s been working on her out-of-system swings and she improved a lot these last couple weeks with that.”

Jonni Parker on the most exciting part about playing in the Big Ten:

“I think it’s the competitive level every single night. You always know that you’re going to have a hard match and you have to play your hardest. You’ve got to play at the top of your game. I think that’s the most exciting part.”

Serena Gray on her favorite parts of Big Ten play:

“I like the fast plays. It’s not one of those conferences where you take a free ball slowly. You see Kendall, she’ll be fast, fast. A free ball is just a boom, boom kind of thing. Off the block, our defense is covering or other teams’ defenses are covering. The rallies are so long. It’s just fun. That one rally where Kendall had those two crazy saves, it was just like, ‘Ah!’ It’s just so exciting. It’s fun to be in a really good conference.”

Kendall White on competing against a familiar face in Kylie Murr:

“I personally like the Big Ten a lot because of all those reasons as well, but I also love playing people who I know. A lot of Midwest people are in the Big Ten. Playing people who you know, especially your friends, I think you have more of an urge to beat them. It’s a rivalry and I love that. I love getting down and getting gritty. It’s fun. Always is.”