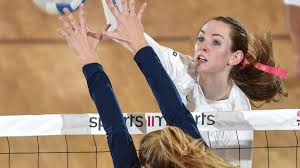 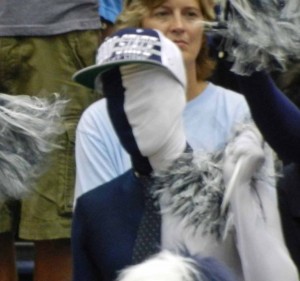 Asked after the match how it felt to go from a dominant performance in the 2nd set (and a 2-0 lead) to a winner-take-all fifth set, 6-2 Sr. OH Megan Courtney had a simple, to-the-point answer: “Can’t happen.”  Courtney went on to say:

I thought we played well in the second set, but that break, it’s good for them because they got a chance to regroup and change their lineup — they switched who they were playing in the middle — but that doesn’t mean that we stop playing, and I think we stopped playing a little bit in the second, and third and fourth sets.

After the match, Coach Rose complimented the play of two seniors: Penn State’s Megan Courtney (a match-high 22 kills, with 13 digs and five blocks) and Minnesota’s 6-1 OH Daly Santana (19 kills, hitting .255, which in a match where Penn State hit .198 as  a team and Minnesota hit .216 was very good):

We were fortunate to win it based on how we  played for the third and fourth games.  I thought it was a well-played match by the two seniors.  I thought Santana and Megan were especially key for their teams, with their confidence and  their smart shots.  But sometimes you win those games because you’re playing at home.  I thought we had a great crowd — we’re appreciative of the crowd and the band and the support that we get.

[Minnesota has]  great talent, Hugh [McCutcheon] is a great coach — he led the United States to a gold medal and a silver medal  in two Olympics — he’s got a great feel for the game, he’s got a great roster of talent, a very rich state from which to draw.  I don’t think we’re the only team they’re going to be challenging — they beat 10th-ranked Ohio State a couple of nights ago,  so they’re very strong.  I would expect them to continue to very great things.  They’re a tough matchup with the Tapp sisters — they’re athletic, there were times they were hitting the ball over the block, and  when you’re hitting the ball over the block, there are a lot of opportunities to score.

I thought Taylor [Krause] [Penn State’s 5-6 Jr DS who registered a career-high 10 digs] did a real nice job coming in.  I thought [6-0 Fr. setter] Bryanna [Weiskircher] steadied out.  I thought she was good early, got a little complacent in the middle games, and provided good direction in the last game.  To have 12 kills in a 15-point game — that’s a lot of kills.

Coach Rose commented that he thought the team looked tired, and in two sets, sent in 6-1 So. OH Simone Lee,  who registered one kill (no errors).  Asked about her play, Rose hinted that lineup changes might be forthcoming:

I don’t think [Simone] really had a lot of opportunities to do things, and that’s more on me than Simone.  But you don’t have to look very far into the score sheet to see that we have a couple of people that we have to find a better way to get some performance out of them.  So whether it’s a little different lineup massage — we looked at that a couple days this week, we may look at things again.  I think Simone’s  a really good net player and has great energy and spirit, is physically strong, and I think those are some traits that we should try to get on the floor a little more often.

Match Video (Courtesy of Big Ten Network, thanks to psumaui) 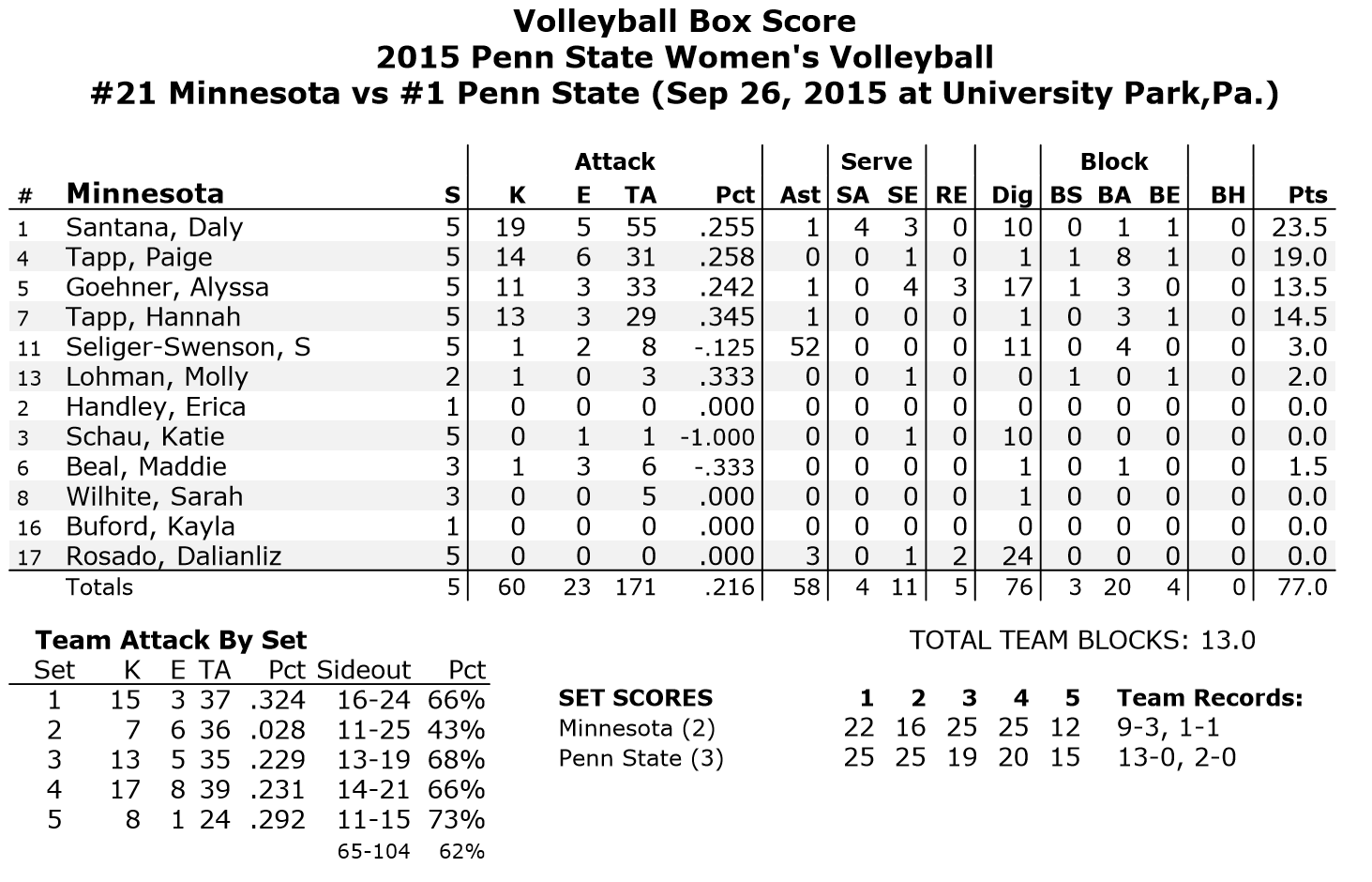 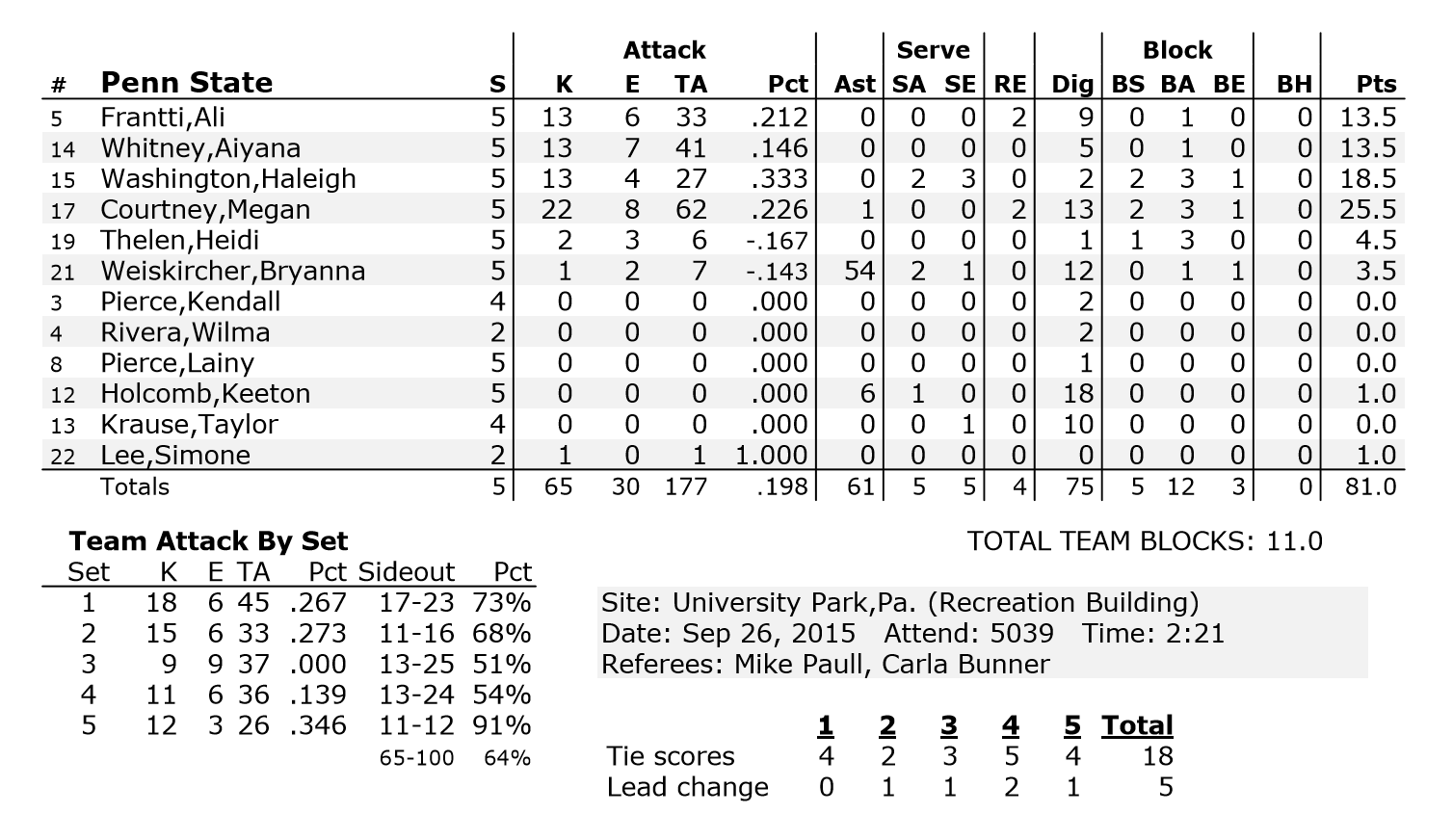