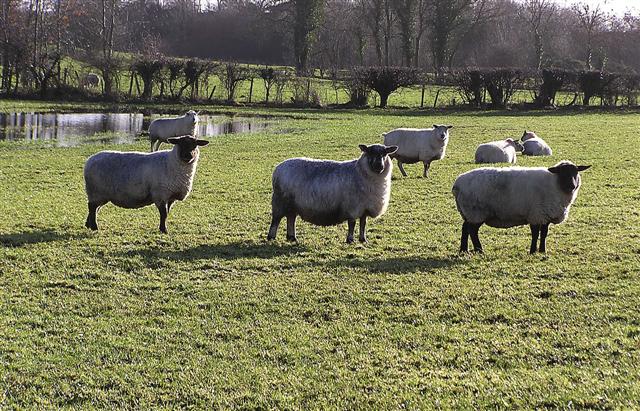 The title of this photo is “Behind every sheep is a silver lining.” What about Gophers and Nittany Lions?

Our friend (R)uffda, who is a Minnesota fan, has been suffering this season as his Gophers struggle, and struggle some more.  Given how close Penn State came to losing to Northwestern Wednesday evening at Rec Hall, we’re very atuned to the importance of silver linings.  So when he sent us this essay, we were happy to post it:

It Could be Worse, by (R)uffda

Back when I was a boy, when I wanted to “chat” with a friend, I had to go out the front door and go over to his house. When I had a hankering for a hamburger, I had to ask my mother if maybe we could have burgers some time that week (and we’d usually have liver two to three times before there would be any sign of a hamburger on the menu). And get this: If I wanted to listen to a pop star wearing a dress made out of meat singing about how she was “Born This Way,” well, I couldn’t.

What I’m saying here is that things could be worse — and the past is just the place to find those worse things. Yes, it’s been a tough two weeks for Minnesota Gophers fans, and the schedule does not look to offer any respite any time soon, but this is nothing compared to having to eat liver for dinner or enduring a certain match in 2002 out in Palo Alto, California.

It’s December 12, 2002. It is cold and bleak in Minnesota (no surprise), but there’s some substantial heat being generated by our favorite volleyball team. Big Ten champions and 9th-ranked Minnesota is facing off against 12th-ranked Arizona in an NCAA regional semi-final match at Stanford’s Maples Pavilion.

Now, keep in mind that the Gophers are Big Ten champions for the first time in forever. Expectations, which were modest heading into the season, are now soaring. Fabulous freshman Gentil has joined sophomores Martin, Bratford, Reinhart and VanderWell,  juniors Busse and Brafford, and lone senior Axel to post a 32-win season. Stanford, a team which had beaten the Gophers earlier in the year in a tight match, is the likely opponent in the next round. Dare we believe the Final Four is within reach?

Game One does nothing to dispel this fantasy. The Gophers dominate and hold seven, count ‘em, seven game points at 29-22. And then a funny thing happens, although not terribly funny at the time, mind you. Arizona comes all the way back to tie the game at 29. The Gophers go up 30-29 for their eighth game point. The Wildcats tie it at 30. Incredibly, the game slips away, as Arizona also scores the next two points, to win 32-30.
Well, that was odd, no? Something you don’t see every day? Maybe even the sort of thing that could destroy a team’s confidence in a crucial match? It does not appear to be the case here. Minnesota comes out in game two and again dominates, building a comfortable, one would think, 24-19 lead. But, nightmarishly, not even remotely humorously anymore, the Cats score the next seven points to go up 26-24. The Gophers show some resiliency of their own, battling back from a 27-29 deficit to tie the game at 29. They then serve for the game at 31-30 and 32-31. Once again, however, that last point eludes them and they fall 34-32, and now trail 2-0.

Here’s where the odd turns truly bizarre. The Gophers lead 27-17 in game three. Remember that thing you don’t see every day? Guess what? Sometimes you see it twice in one day. Arizona wins 11 of the next 13 points and trail only 28-29. They serve to tie the match. But they miss! Déjà vu averted, Minnesota finally grabs hold of that slippery game point and doesn’t let go. They head into Game Four down 1-2.

Unfortunately, this is where the wheels come off the bus (all through the town of Palo Alto). It’s an anti-climax of the worst sort, offering no suspense for the Gopher faithful. After the first three games, this may have been a blessing as there is, believe it or not, a limit to our capacity for misery. Arizona wins this final game 30-19 and the Gopher season comes to a disappointing end. Kim Glass is the game MVP, with 29 kills.

Now that’s the Agony of Defeat.

So there’s my first point: It could be worse. Thanks a lot, right? Well, I do have a second point and, yes, it’s all about those dark clouds and their silver linings. It may be a cliché, but even dark clichés have their own silver linings of truth. You no doubt recall that this Gopher team, which on that day in December 2002 was undeniably a hapless Gopher team, was the same team that went to a National Semi-Final match in 2003 and a National Final match in 2004. Silver lining times two!

It could be worse, yes. But there’s always reason to believe it will get a heckuva lot better. And, sometimes, you don’t have to wait for the next season. Sometimes, like this particular time, there are matches this weekend.