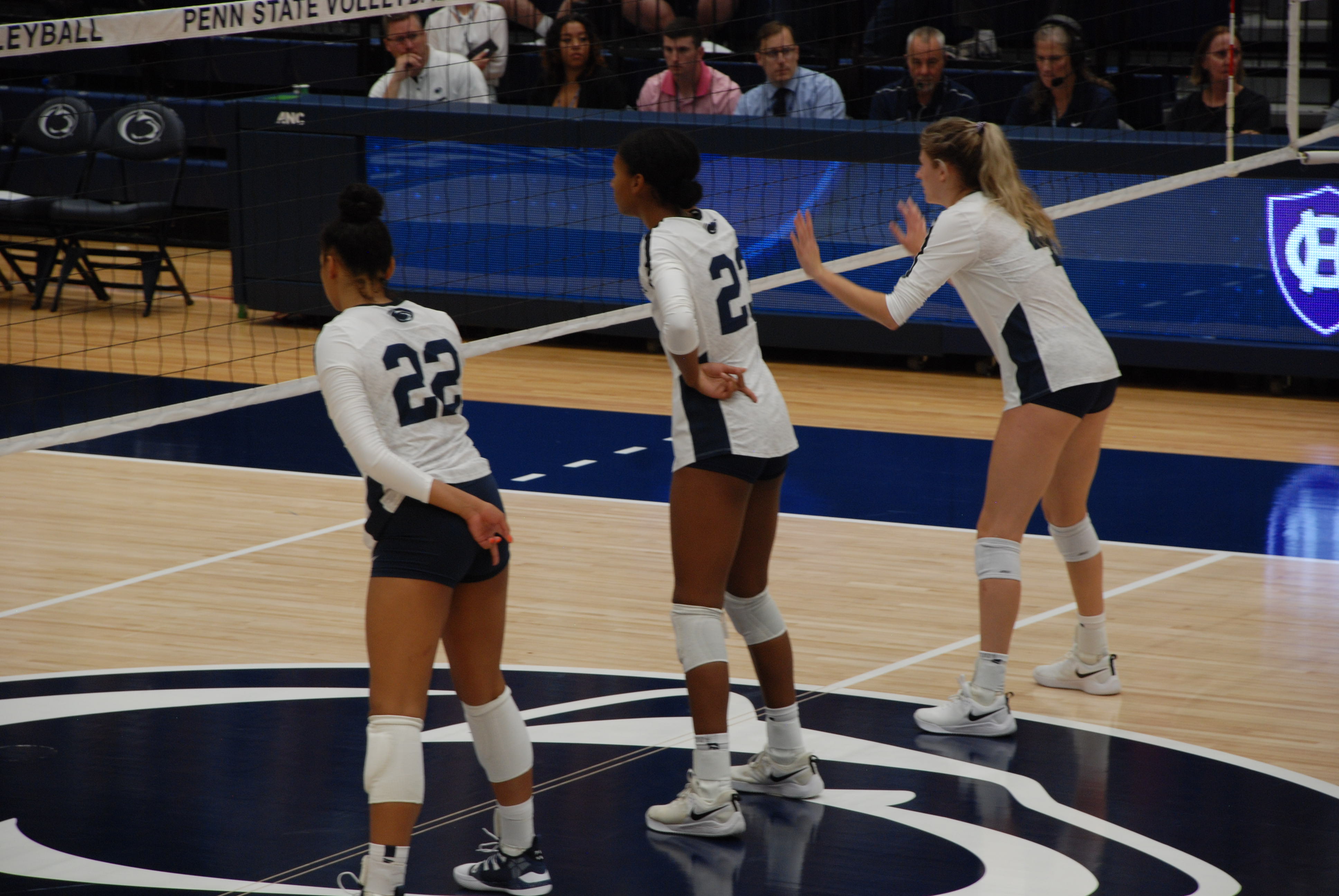 Penn State women’s volleyball held its second weekly media availability of the season Tuesday prior to a pair of home matches against No. 1 Stanford and No. 10 Oregon this weekend.

“It’s a great opportunity to play the defending national champions. We’re in a four-year series where we play Stanford and Oregon, and we’ve been playing Stanford for a number of years. It’s been a cycle that we do by choice. It will be a real test for us. Stanford has five seniors, including the two-time defending AVCA Player of the Year, so that’s a big challenge. Oregon’s finish was similar to ours last year, losing in the finals of regionals. It will be good volleyball. Minnesota is also a top 10 team coming in. They played really well a couple days ago in beating Florida 3-0, so, without putting words in anyone’s mouth, I’m sure they’re looking forward to Oregon after Oregon knocked them out of the tournament last year. The emotions will be running high and hopefully we’ll be ready to play.”

“Stanford has five seniors on the floor, and all of them have been recognized as All-Americans. It’s a team that’s capable of putting a streak together similar to the one that we had a number of years ago. I have great admiration for the fact that they’re playing the schedule they’re playing this year, because they’re playing a great collection of the top teams. They have the luxury of school not starting for a while, so they can be on the road playing everybody. I know, having been in that position, that you have a choice to make. If you’re the defending champion, you can elect to play the top teams or you can try and stay healthy, and push the button and hope that you can fast forward and see if you’re going to be relevant come the tournament. They’re playing everybody — and up to this point in time they’ve certainly demonstrated that they’re the team to beat.”

Coach Rose on whether or not he needs to be patient with his players:

“I’m not thinking I’ve ever been known for having great patience, but I think I have patience for the people who I think I should have patience with. Those people, I let them kind of simmer on their own. The people who I think should be able to carry a heavier load and they have experience, the expectations for them are a little bit higher. My focus is on them a little bit more and the expectations are therefore a little bit higher than all the others who are coming along at their own speed. Certainly last weekend’s teams were better than the teams that we played the first weekend, and the teams we’re playing this weekend are far better than the teams we played last weekend. Certainly we’re not the best team Stanford has played to date, but that’s okay. Scheduling is what it is. We didn’t need to play the No. 1 schedule in the country with three fourths of our team being freshmen and sophomores. We do need to have some development and we do need to have some kids trying to figure some things out before we play two thirds of our schedule, which is the Big Ten part of the schedule.”

Coach Rose on how the team is coming along so far:

“I think we’ve made some progress in some areas. We’re always limited. There’s some fluky injuries and things that seem to be setting us back and slowing us down a little bit that seem to be happening with the players. That’s just happenstance. You really can’t wrap them in bubble wrap and tell them to stay out of harm’s way when it just seems that some people can’t stay out of harm’s warm.”

“Both of them are exceptional players and valuable parts of their team’s performance and play. We recruited Morgan as well, so I’m very familiar with not only her play as a club player but also how she’s played in college, because we’ve played against them all three years previously. She’s an exceptional talent and I thought she would have fit in really well here, but I’m not somebody who worries about what I don’t have. I’ve enjoyed the contributions of Kendall. I think she’s really played well for us. She plays hard and she embraces the culture that we have about playing hard every day. I think it will be two players who play that [libero] position really well.”

“Kendall will have her hands full trying to deal with Kathryn Plummer. We don’t have anybody who hits as hard as Plummer, and that includes any of our male practice players or staff members. She played last week and the Texas coach, [Jerritt Elliott], said that she may be the best outside hitter to ever have played college volleyball. I’m not sure I’m going to throw her there, but I’m going to say she might be the first player who could be a three-time AVCA Player of the Year. Certainly after getting 34 kills in her last match [against the Longhorns], she’s showing that she’s the candidate for that. And we recruited her as well. That’s always why I wanted to play Stanford. It gave me an opportunity to see the players I recruited but didn’t get.”

“I’m always happy when my former players go into coaching. Alisha’s pedigree is a coaching pedigree. Her mother was a very successful high school coach and was her coach. Her grandfather, who just recently passed away, was a very successful basketball coach at Northwestern as well as a former basketball coach in the high school ranks in Michigan. Part of her lore also to Stanford was her husband was a former basketball player at Stanford. I’d rather not be playing against my former players who are coaching, but I’m happy that following her career playing on the U.S. national team that she went into coaching. I’m also especially happy that she got her [Penn State] degree so that that opportunity presented itself.”

“I think she excelled in her performance in all aspects of her game — blocking, hitting, just being a star player. I’ve been playing with Kaitlyn since my last year of club, so it’s always been a joy getting to be with her on the court and getting to feel her energy, her vibe, getting to block with her. It’s just a great feeling being able to play with her for sure.”

Allyson Cathey on whether she has any superstitions:

“Before the game, I listen to my music — my hype playlist. One thing I tend to do before we start the game is tie my shoes really tight, because in my mind it makes me think I’m going to jump higher. Probably not but it’s a mental thing. I think mentally it helps me perform better, so when I tie my shoes tight, I’m like, ‘Okay, now I’m ready.'”

Allyson Cathey on what she’s told the freshmen about this weekend’s atmosphere in Rec Hall:

Keeton Holcomb on her pre-match superstitions:

“You’re supposed to take your jewelry off before games, but I don’t take my necklace off until I go to change into my jersey. The refs always come up to me every game and say, ‘You need to take your jewelry off.’ And I’m like, ‘I’ve been doing this for a very long time. I know.’ I have my thing and I do have to argue with them a little bit sometimes. When I switch into my jersey, I take it off and hang it on my locker. A lot of the girls will wear their hair the same for every game and all that stuff, but I don’t really do any of that. It’s for sure a comfort zone thing. When we went to the Final Four, I had to take it off and I just was like freaking out.”

Keeton Holcomb on incorporating the freshmen:

“We’re a very close team. We’re together all the time. Every single one of [the freshmen] all have different personalities. They’re all super cool people and I love all of them. I wouldn’t say I could pick just one [I’ve taken under my wing]. I love all of them.”

Gabi Bailey on why she chose Penn State:

“I think it was really the family atmosphere. I really liked how the girls are close like family. It makes it feel awesome. The energy at games is super incredible, so I really like that a lot.”

“He’s given me a lot of advice. He tells me to hit the ball with more sauce. That’s definitely the biggest thing that he tells me to do.”