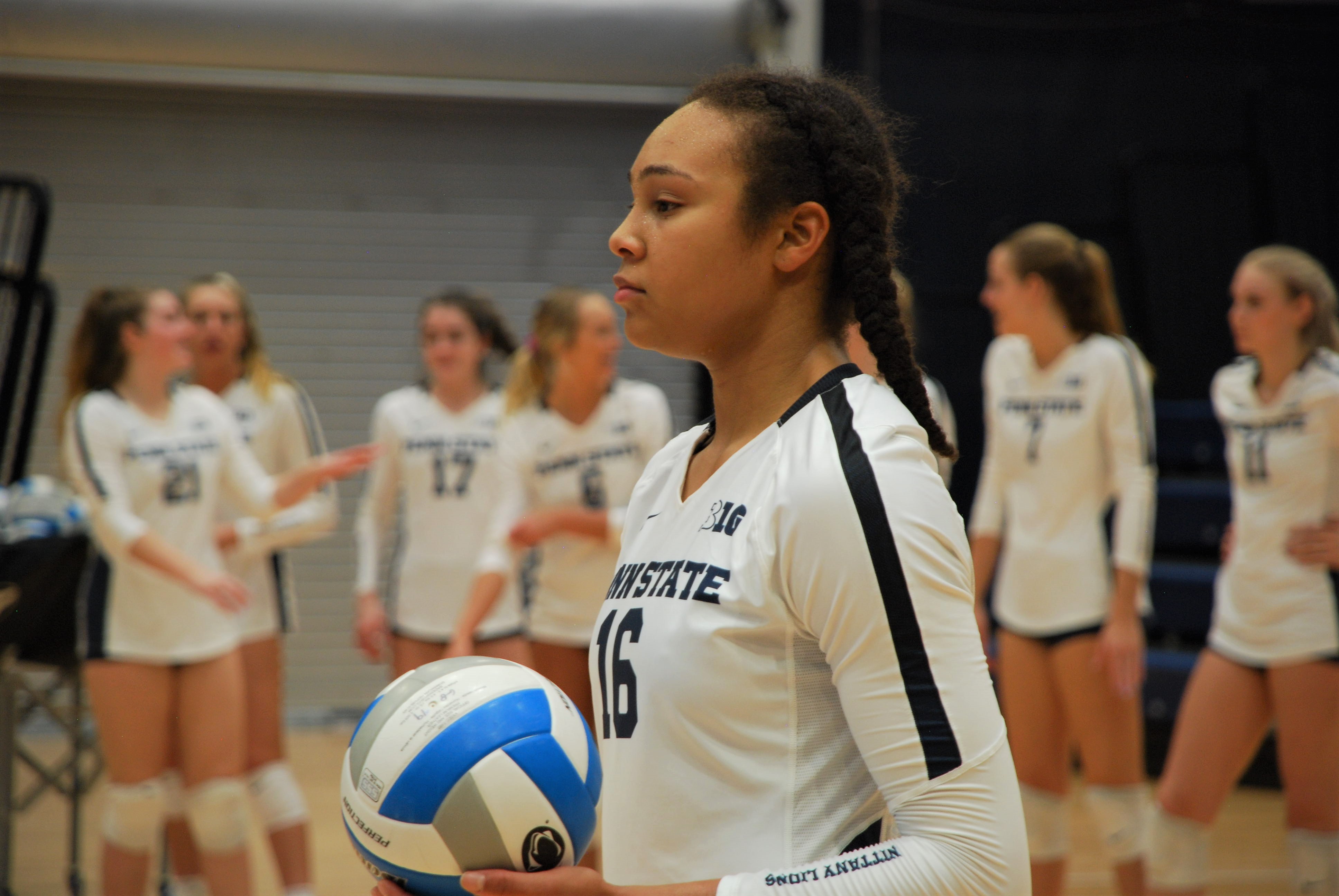 Kaitlyn Hord and Serena Gray were two of the headliners of Penn State women’s volleyball’s top-ranked 2018 recruiting class, and they justified that distinction after earning AVCA All-American honorable mention as true freshmen. Not even three-time first-team selection and program great Haleigh Washington can make that claim.

Now, the sophomore middle blockers are taking their games to another level as they help lead the Nittany Lions through the gauntlet that is the Big Ten. Heading into Friday’s road match against Iowa, Hord has the highest hitting percentage in the conference with a .435 clip — good for top 10 nationally. Gray trails slightly behind her with an impressive .371 mark halfway through Big Ten play.

“I think the thing she’s improved the most is her vision on the court,” Hord said of Gray earlier this season. “Last year, a lot of us, because we were young, we just kind of hit the ball just to hit the ball. Now, she’s mixing up her shots and she’s incorporating tips. She’s hitting different shots, not just swinging one way or the other, but actually seeing where it’s open on the court and going for it.”

Head coach Russ Rose clearly understands the talent and potential he has in Hord and Gray, routinely praising their work ethic on and off the court. It’s likely both will give the U.S. women’s national team a serious run in the not-too-distant future.

“Kaitlyn is our most improved player since the season ended last year,” Rose said in the media guide. “She’s very strong at the net and is an incredibly strong natural blocker. She attacks balls at a great height and her range has really improved. She’s a great talent and a wonderful young person.”

Hord and Gray are each excellent students and were recognized alongside their fellow academic award winners during the Pitt-Penn State football game on Sept. 14 at Beaver Stadium. The ever-candid Gray said earlier this season that her biggest fear in life is coming in second.

“Certainly, off the court, one of Serena’s great attributes is she’s an incredibly strong student,” Rose said. “I think she’s an independent thinker. I think those things serve her really well. On the court, she’s just really a physically strong athlete.”

Gray has also emerged as one of Penn State’s best servers this season, already surpassing her 2018 output of 13 aces with 16 through the first 19 matches. Only classmate Jonni Parker and her thunderous jump serve has accounted for more than Gray with 26. 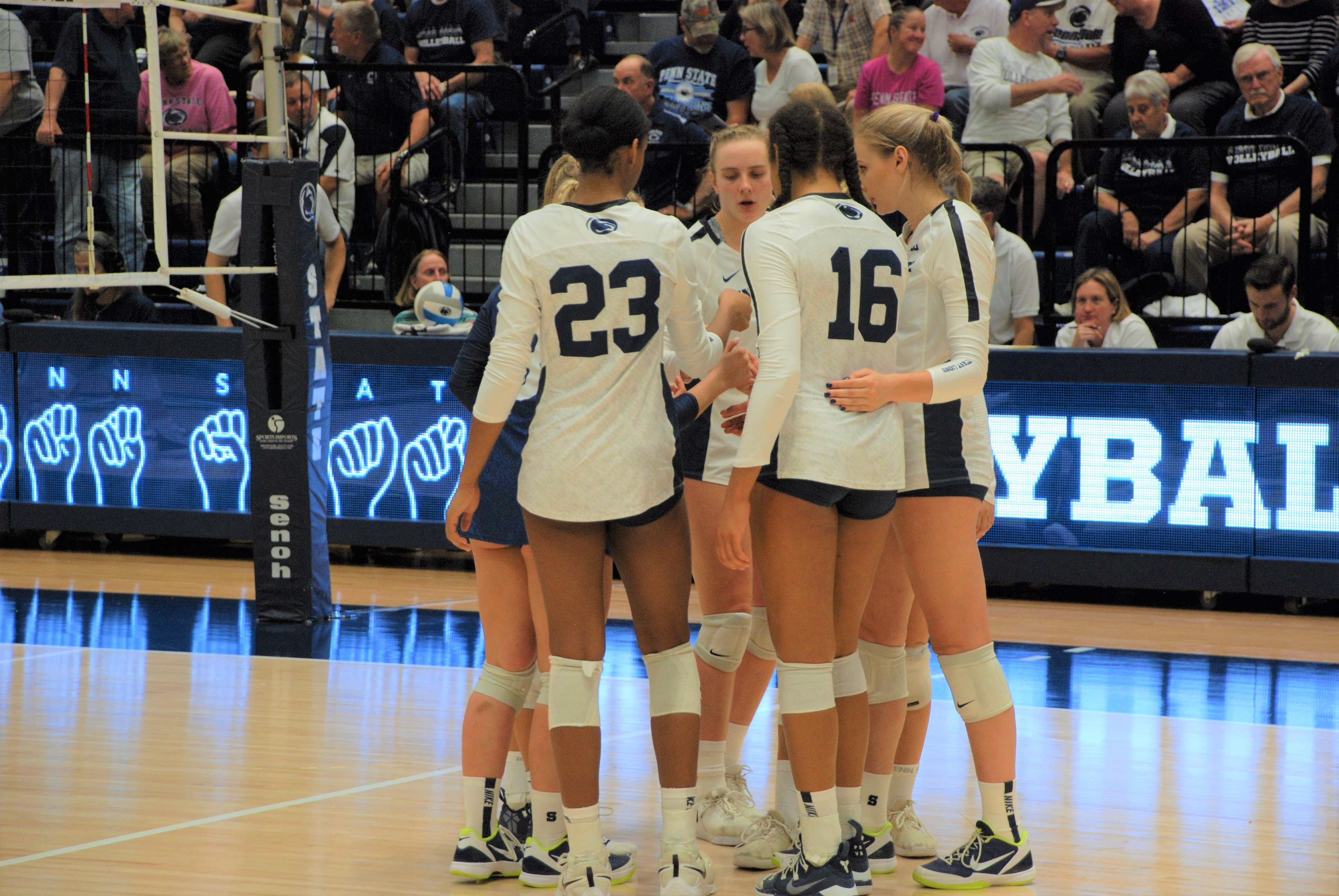 Gray, who hails from Temple City, California, discussed some of the lessons she’s gleaned from watching Washington — a current member of the U.S. team — compete over the years. Washington, of course, helped Penn State win its most recent national championship as a true freshman in 2014.

“I’ve talked to her a couple times when she visits,” Gray said. “Just watching her play as a prep player when I was younger, just seeing her competitiveness and her fierceness for the game, she’s not afraid to cheer and get in her teammates’ faces and scream. I think that’s amazing how she can really pump up her teammates — not only by example but also by encouraging them through her energy that she brings onto the court. That’s contagious.”

In the days following Penn State’s 3-1 loss to Stanford on Sept. 13 at Rec Hall, Hord, a Lexington, Kentucky, native who currently leads the Nittany Lions with 84 total blocks, said she learned that this team has more than enough fight in it to accomplish its season-long goals. Penn State has won seven straight matches due in large part to the performance and overall efficiency of its middle blockers.

“It’s kind of the feeling that we won’t stop until we get where we want to be,” Hord said. “I think I learned that our team is a group of people who will fight for just about anything.”

When asked what the biggest takeaway was from her freshman season, Gray took the approach of a savvy veteran who knows that the daily grind of practice is essential — and so, too, is putting yourself out there and trying new shots when the bright lights are on.

“That it’s okay to fail knowing that you’re getting better,” Gray said of what she learned. “You can’t expect to be good without taking risks. You need to know that the harder you’re hitting or the more risky the play you’re trying to make, the bigger the reward, but then also the lower the low could be. I think that’s an important thing to keep in mind even in practice. Knowing that you sailed a ball far out that, yeah, it really sucked and it looked awful, but one day you’re going to be able to hit that deep-corner shot really hard and it’s going to be worth it.”

Tori Gorrell, a former middle blocker who’s played a variety of front-row roles for the Nittany Lions as a redshirt senior, had high praise for the sophomore duo earlier this season. After all, she’s been there every step of the way watching them improve and gain confidence as more well-rounded players.

“Kaitlyn and Serena are just such great hitters and blockers that they’re unable to be matched in any other conference, so that’s really awesome,” Gorrell said. “I love watching them.”