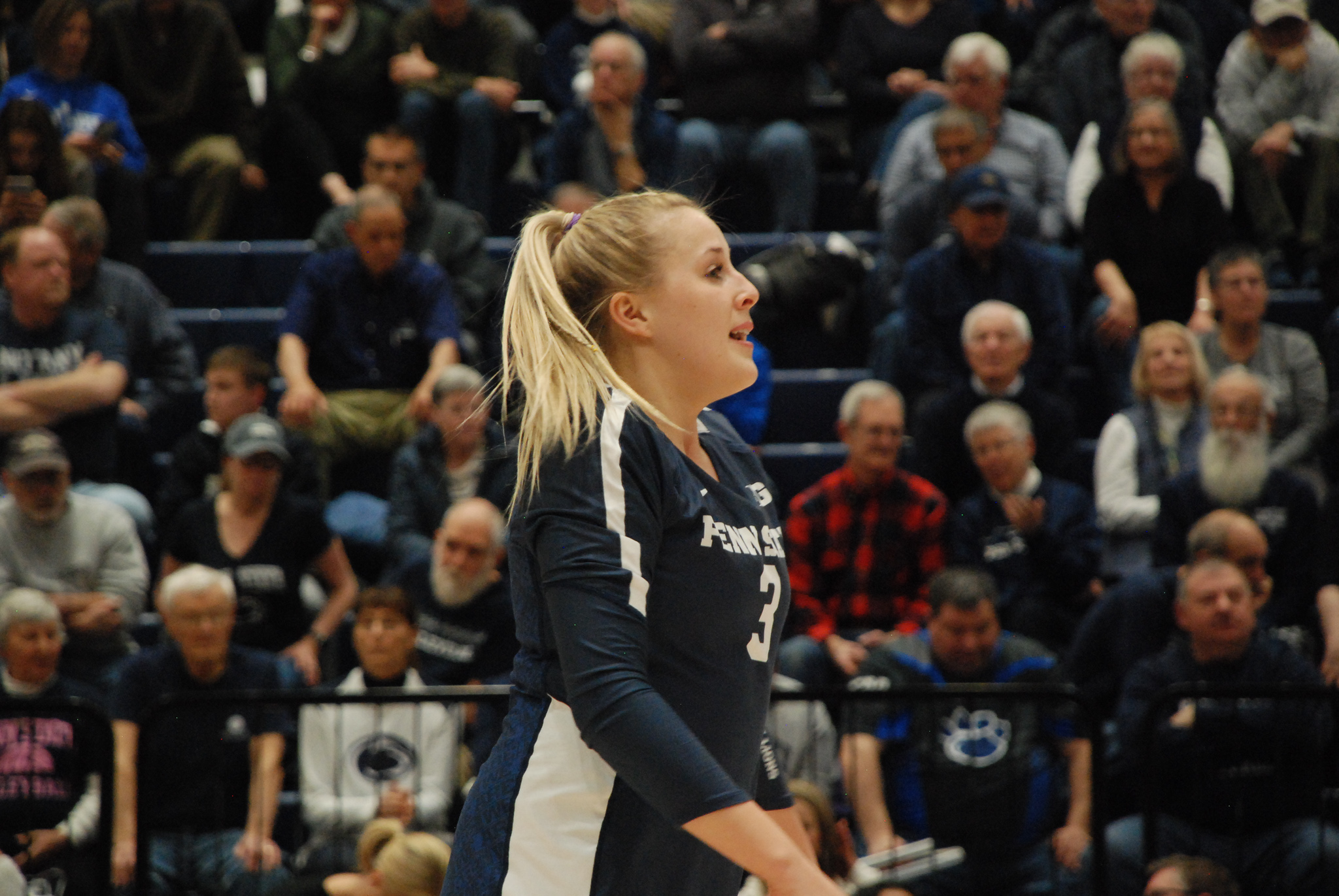 The Penn State women’s volleyball program has a strong tradition of sending players to the professional ranks upon graduation, and this year is no different.

Kendall White and Tori Gorrell are the latest Nittany Lions to go pro after finishing impressive careers in University Park, but they aren’t the only Penn State alumnae who are competing overseas for the 2020-21 season.

White holds the Penn State record for career digs with 1,994 and is the only libero in program history to be named an AVCA All-American three times and take home Big Ten Defensive Player of the Year twice. Gorrell put together her best collegiate season as a redshirt senior in 2019. She played particularly well against Stanford in the final match of her Penn State career, hitting .667 with 13 kills.

Below, we’ll break down where these Nittany Lions standouts are playing this season and, in the case of the more seasoned vets, give a little background on where they’ve been competing the past few years.

Hancock led the Nittany Lions to back-to-back national championships as an upperclassman and was named the AVCA National Player of the Year as a senior in 2014. Hancock is far and away the best server Penn State has ever had. She owns the program record for career aces with 380 — 145 more than Ellen Hensler, who is currently in second place with 235.

Hancock was named an All-American three times during her Penn State career and earned Big Ten Freshman of the Year honors in 2011. Hancock has been a regular contributor for the U.S. women’s national team at setter the past few years and has had great success playing professionally in Europe.

Hancock started her pro career in Puerto Rico before making stops in Italy, Poland, and then Italy again for the past few years. She spent two seasons at Saugella Team Monza before transitioning to her current club, where she is in her second season. Hancock will have the chance to reunite with former teammate Haleigh Washington, who overlapped with Hancock during the 2014 season.

Washington was one of the most efficient players in Penn State history, finishing her college career in second place on the program’s all-time hitting percentage list with a .458 clip. Only Arielle Wilson’s .468 eclipsed Washington’s superb mark. Washington was named a three-time first-team All-American and took home the 2017 Senior CLASS Award before turning pro.

Washington is one of the country’s top middle blockers and has been a mainstay in the U.S. women’s national team lineup. Last summer, she helped Team USA qualify for the 2020 Tokyo Olympics, which will now take place July 23-August 8, 2021. Washington has a good chance to make her first Olympic roster if everything goes according to plan.

Washington has spent her whole professional career competing in Italy, which is known as one of the most competitive countries for women’s volleyball. She now embarks on her fourth pro season alongside Hancock as the only Americans on their team, which features players from all over Europe. The already strong connection between Hancock and Washington is sure to keep fans on the edge of their seats.

Courtney is a member of both the 1,000 career kills and 1,000 career digs clubs at Penn State. She earned NCAA Championship Most Outstanding Player in 2014 after an excellent postseason in which she recorded 34 kills and 30 digs in the semifinals and national championship match combined. Courtney was named an All-American for the only time during her college career the following year as a senior in 2015.

When she isn’t playing outside hitter for her professional club, Courtney has the rare distinction of also serving as one of the U.S. women’s national team’s regular liberos. Her size at 6-foot-1 is unusual but certainly not unheard of for the position. She’s such a good passer that head coach Karch Kiraly recognized he could employ her skills most frequently in that area by slotting her in the lineup at libero, where she splits time with Justine Wong-Orantes and Mary Lake, among others, at various tournaments.

Courtney and Hancock have twice had the chance to continue being teammates since turning professional. They both suited up for Polish club Impel Wroclaw before reuniting with Igor Gorgonzola Novara last season in Italy. Courtney played in Turkey and for another Italian club, Zanetti Bergamo, prior to continuing her connection with Hancock.

Frantti was named the AVCA National Freshman of the Year after putting together an outstanding debut season for the Nittany Lions. She played a major role in helping the team win its seventh national championship in program history. Frantti led the Nittany Lions in kills that season with 391, but they had seven players finish with at least 135 kills that year, showcasing the supreme offensive depth of that 2014 team.

Frantti played her first pro season in Slovenia before heading to France and Poland. Now, she’s playing in Italy alongside Rhammat Alhassan, a four-time All-American middle blocker from the University of Florida. On top of her offensive prowess with 1,283 kills in a Penn State uniform, Frantti was also an outstanding passer for the Nittany Lions with 807 digs.

Reed finally had the chance to play starter’s reps for the Nittany Lions as a redshirt senior in 2018, and she proved that her patience paid off in a big way. After winning a national championship as a freshman in 2014 and providing a spark in short bursts off the bench the next few seasons, Reed made 30 starts in her final season. The only four matches she didn’t start she missed due to injury.

Reed began her pro career in Turkey, where she played the last two seasons, before making the jump to a slightly higher level of competition in France. Reed has an excellent vertical and a thunderous swing, which should make her new setter quite happy. She will have the chance to compete against former teammate Kendall White this season in Ligue A Féminine.

Although she never led Penn State to a national championship, something that probably bothers the ultra competitive White, she is undoubtedly the most decorated libero in program history. White became known for her highlight reel digs and fiery persona on the court and was a fan favorite in Rec Hall. She told espnW in an interview in 2018 that she chugs a Red Bull before every match.

Soon after graduating from Penn State this past spring, Gorrell began her pro career in Puerto Rico with Las Amazonas de Trujillo Alto. A few months later, Gorrell announced that she had signed a contract with Turkish club Kuzeyboru, where she is currently in the midst of her season. Gorrell played a variety of positions during her Penn State career and worked tirelessly in practice on improving her passing, which paid off in 2019 when she recorded 45 digs — one more than she did over the course of her previous three seasons.