The U.S. Women’s National Team ended up in fourth place at the Montreux Volley Masters Tournament, losing its final three matches.  Below are the final standings, and a recap of the matches agains China, Cuba, and China again, along with blog entries from Team Manager/Leader Russ Rose (well worth the look): 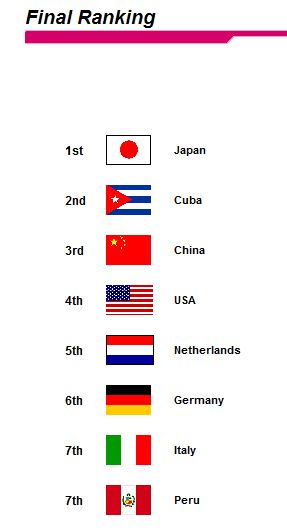 COLORADO SPRINGS, Colo. (June 10, 2011) – The U.S. Women’s National Volleyball Team lost to China 25-27, 25-14, 19-25, 25-21, 15-11 on Friday evening to conclude the Montreux Volley Masters Pool A in Montreux, Switzerland.The U.S. (2-1), ranked second in the world by the FIVB, and China had already advanced to the semifinal round regardless of the head-to-head pool match. The Americans will now face Cuba in the semifinal on Saturday evening at 9 p.m. Switzerland Time (noon Pacific Time), while the Chinese will take on Japan. Team USA won the silver medal at the 2010 Montreux Volley Masters event.

What a difference a day makes – as the teams in the Golf Hotel wake up – not only will they be trying to look for the sun, as it apparently only works once a week, they will have to shake off the losses from last nights matches from their memories.

The biggest question now that the pairings have been established for the semifinals, is who is going to play for the various teams. The match-ups are as follows: Germany-Italy, Netherlands-Peru (in the lower half of the bracket to determine 5-8th place), China-Japan and Cuba-USA (to determine the top four finishers). Two nights ago, China rested three starters from its match from the evening before and inserted two of them after splitting the first two sets with Peru. Yimei Wang, recognized as one of the world’s premier attackers, has only played in less than three full sets. Japan, after getting 30 points (the leading point total in a match) from Yukiko Ebata in its match against the Netherlands, rested her and watched as her replacement Saori Sakoda led her team with 16 points against Cuba. In talking this morning with Olympic gold medalist team leader Yuko Arakida (who mentioned she used to practice 10 hours a day), Japan has to declare its 19-person roster for World Grand Prix next week and the players needed to be evaluated. The USA team has also been trying to see the various players on the tour in action as personnel decisions are also on the horizon for the staff. It will be interesting to see if the teams elect to play their best lineups or remain committed to reviewing the players.

On Sunday morning, Coach Rose’s final blog the closely-matched field, and how much he enjoyed the Montreux Volley Masters experience:

The final day and final blog come with a great deal of anticipation for the teams in the finals and a welcome reprieve from the author. I look at myself as a witness to this exciting event and was happy to have been given the opportunity to attend and share some of my observations.

Yesterday’s matches were filled with drama and three of the four matches went to four sets and six of those sets were decided by two points. The margin between these teams are thin and matches played one day can easily be reversed the next.

Among Coach Rose’s observations at Montreux were that “the jump spin serve has transitioned to more of a jump floater” and that “the international protocol of a 30 minute warm-up shows that we may be over preparing on game night in the college game.” For Coach Rose’s complete blog post for 6-12-11, Click Here.

As it turned out, China edged the USA for the Bronze medal with a 3-1 win on Sunday.