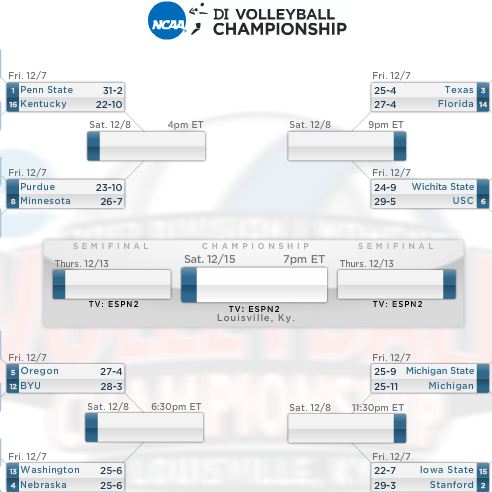 What: Kentucky vs. Penn State

The Kentucky Wildcats had a very nice season.  The team went 22-10 in the regular season (3rd place in the SEC Eastern Division, 4th place overall), 5-6 Sr. L Stephanie Klefot was named the SEC’s Defensive Player of the Year for the third consecutive season (but only Second Team All-SEC — how does that work? Actually, it works the same way it did for Michigan State’s 5-4 So. L Kori Moster, who was named the B1G’s Defensive Player of the Year, but didn’t make 1st Team All- Big Ten. We’d say they came up short, but that would be wrong, for sure),  6-2 Jr. OH Whitney Billings was named to the All-SEC First Team, and  6-3 Fr. MB Sara Schwarzwalder was named to the SEC All-Freshman Team.

Given all that, if we were Kentucky, we’d be more than a little annoyed that our team received no votes in the final AVCA Poll, and widespread criticism for receiving a #16 seed in the NCAA Tournament.

But, at least in their public face, Kentucky is taking a more positive approach. Here’s Kentucky head coach Craig Skinner talking about his team playing in the NCAA Tournament, how proud he is of what his team accomplished this season, and how they can “throw all that out the window” if they don’t perform well in the tournament:

Give a lot of credit to Ohio State.  Heck of a team, and they brought it to us in game one. We had a great game plan and it didn’t work in game one, but we stuck with it and executed it as the match went on. Our serving and blocking got involved. Then people stepped up. Some great defensive plays by (Stephanie) Klefot, great decisions by our setter (Christine Hartmann) and our attackers put the ball away when we needed them.

Here’s the complete video of that interview: