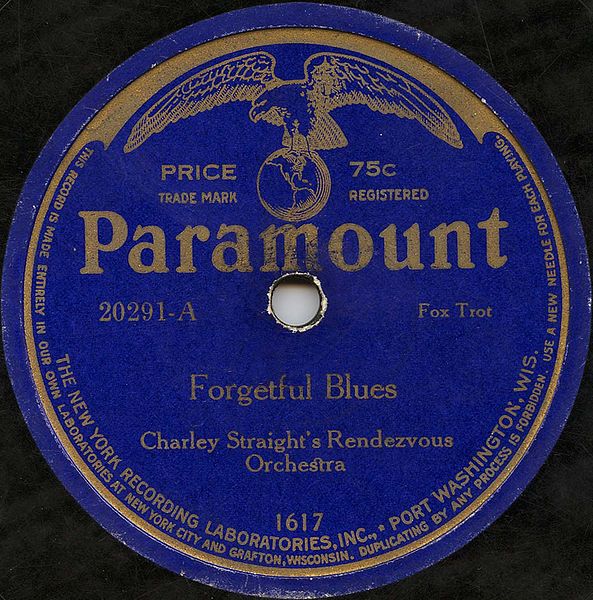 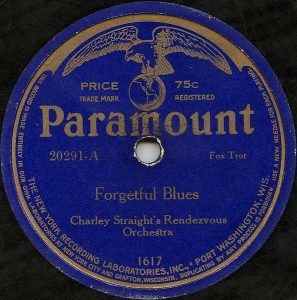 How quickly BTN Live forgets.  Here’s what they posted on February 14, 2017, after the UConn women’s basketball team reached 100 straight wins (which, by the way, is a tremendous accomplishment): 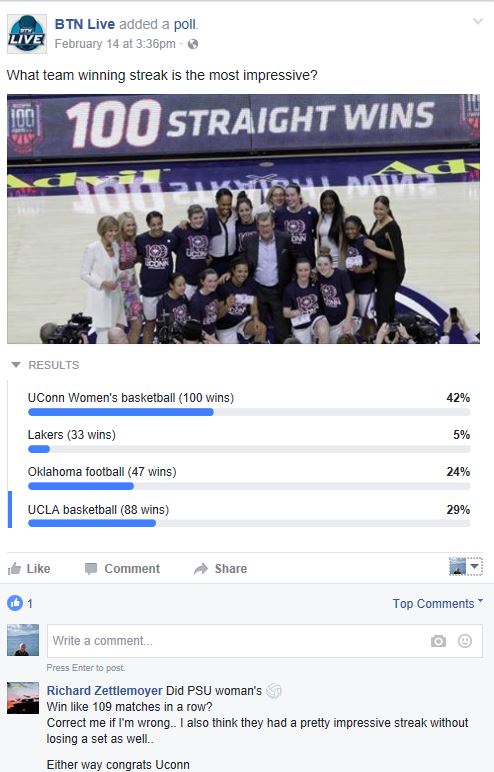 Yes, Richard Zettlemoyer, BTN Live was giving us a “Wait, what?” moment.  Inexplicably missing from that poll was the Penn State Women’s Volleyball team’s 109 consecutive match win streak from September 21, 2007 to September 10, 2010, during which time Penn State won an NCAA record 55 consecutive road matches, three consecutive NCAA titles, lost a total of only 19 sets, and, from the final set of the 2007 National Championship match against Stanford to the third set of the 2008 NCAA National Semifinal match against Nebraska, won an NCAA record 111 straight sets!

Perhaps it was simple ignorance.  Or perhaps BTN Live simply . . . forgot.  Either way, BTN Live, you can rest easy, because we’re here to remind (or inform) you about the incredible 109 match win streak by the Penn State Women’s Volleyball team.

It is the longest consecutive victory streak by an NCAA Division I women’s team in history and (arguably) second overall to the Miami men’s tennis team’s 137 match streak.  As we discussed here, that’s true, but not the full story.  The Miami streak is the longest for an “aggregate score” team sport — like tennis, golf, and wrestling — where points earned in multiple individual competitions are aggregated to determine the team score.  The Streak is the longest for a “single score” sport — like football, or basketball, or volleyball.  We think these records are really apples and oranges.  But it was going to end sometime, and as everyone in the college volleyball world knows by now, the Streak was broken on September 11, 2010 by Stanford in the Finals of the Nike Big Four Volleyball Classic in Gainesville Florida.

But don’t take our word for it.  Here’s what Jen Gunnels, of NCAA.com, said about The Streak in her post on Oct 4, 2011 “Penn State’s 109 consecutive wins eclipses all other programs“:

“Given the competitiveness of women’s volleyball across all of the divisions, I don’t foresee this record ever being broken,” said Kathy DeBoer, executive director of the American Volleyball Coaches Association (AVCA).

And The Daily Illini took note (with a nice shoutout to DigNittanyVolleyball.com) in its September 11, 2010 post “Longest winning streak in college sports snapped for Penn State volleyball“:

Penn State has been the college volleyball powerhouse for the past three years.  The Nittany Lions, ranked No. 1 in the country, are the three time reigning national champions and had a 109 consecutive winning streak.  Stanford put a stop to this run Saturday night when it swept Penn State 28-26, 25-12, and 25-18 at the Nike Big Four Volleyball Classic in Gainesville, Fla.This is the longest NCAA consecutive team “single score” winning streak. In second is the North Carolina women’s soccer team (1990-1994) with 92 straight wins.  According to dignittanyvolleyball.com, a “single score” winning streak is different than an “aggregate score” winning streak which is for competitions that have individual competitors, like wrestling, golf and tennis. The overall record for consecutive wins of any type is held by the Miami Fla. men’s tennis team, that won 137 straight matches from 1957-1964.

We understand.  A winning streak that spans more than one season (this one spanned parts of four) is a strange hybrid, involving a changing cast of characters, each with different strengths and weaknesses and each with different team dynamics.  So although each group of players that contributes to the streak can take ownership for their part in it, no single group can lay claim to the entire streak. That’s one reason Coach Rose didn’t like to talk about it.  More fundamentally, we think, his focus was on the present and the future (as it should have been) and how to make his current team better, not on what happened in the past. That’s for fans.

Having said all that, The Streak is worth remembering if only to put the spotlight on women’s volleyball.  And how you might want to pay attention to a fast-growing potential audience.  Here’s a fact for you, BTN Live: according to this ESPN article “Why volleyball — not basketball — is winning the popular vote,” girls volleyball is growing at a faster rate than girls basketball:

Two years ago, for the first time, more high school girls played volleyball (432,176) than basketball (429,504), according to the National Federation of State High School Associations. In 2015-16, volleyball added another 4,133 girls to those numbers, while basketball lost 276 participants.

Examine the past decade, and the numbers are more striking. Statistics compiled by the NFHS show an increase of more than 40,000 volleyball players in that span and a decrease of 23,000 basketball players.

So, let’s applaud the UConn women’s basketball team for a great accomplishment.  But let’s not forget that other, faster growing, ever-more-popular sport — women’s volleyball — and the accomplishment of the Penn State Women’s Volleyball team:  109 consecutive wins from September 21, 2007 to September 10, 2010.